At first glance, you would not think it was a pre-war house, but this charming villa, named The Lookout, was built around 1935. It is situated on a low knoll above South Bay Road. This story is about who lived there in December 1941 and what happened to them during the Battle Hong Kong. 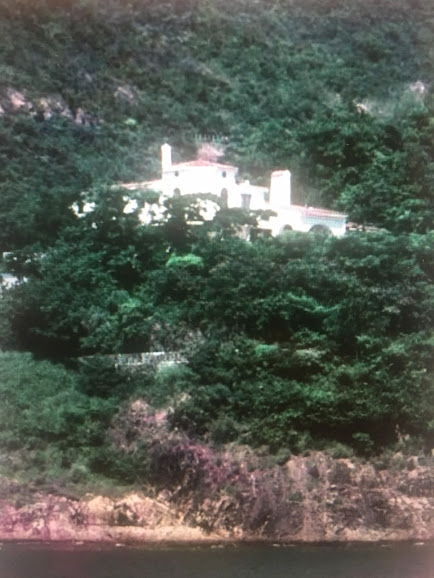 The Lookout (Photograph by IDJ taken in 1966 and posted on Gwulo.com) 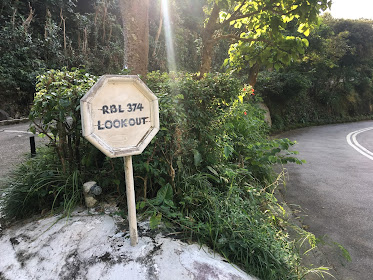 The entrance drive from South Bay Road (Author)
A search of the Land Registry records, by history enthusiast Alex Macdonald, showed that the property had been leased in 1935 to William Walter Ritchie. He must have sold it after the war as in September 1946 the new owner is listed as American International Underwriters Limited. This is now part of the American International Group (AIG) and the ownership remains unchanged to date. The AIG company roots go back to 1919 when Cornelius Vander Starr established a firm of insurance underwriters in Shanghai. I wonder who lives there today,  perhaps the home of the company's regional manager. The Lookout was built in the style of a Spanish-villa, a bit like Altamira, now called Estrellita, on Repulse Bay Road. This style was popular in the 1930s.
In December 1941, it was the home of sixty-two-year-old William Ritchie, a retiree, and his wife fifty-seven-year-old Isabella Cameron Ritchie (nee Reid). William had spent thirty-eight years working with the China Postal Service.  He was born in Lisburn, Ireland. He joined the Shanghai Post Office in 1901. He married Isabella in 1906 in Kiuikiang, China. They had three children all born in China. Ritchie retired in 1938. He moved to Hong Kong and the newly built Lookout was the home where they expected to spend their retirement. The villa looked out over the three bays, Repulse Bay, Middle Bay and South Bay. 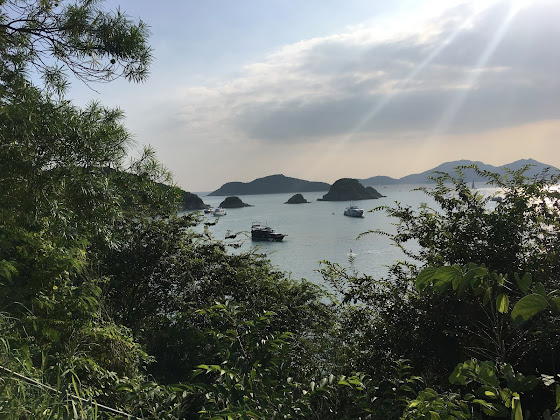 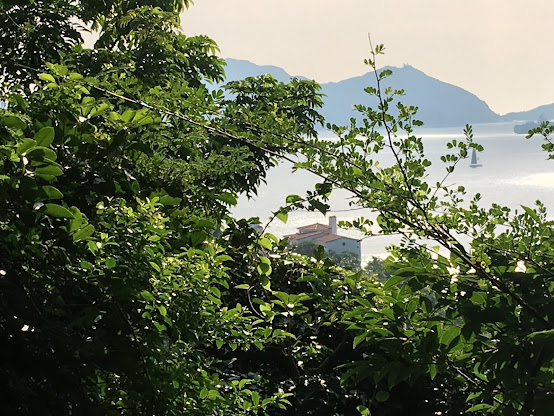 The Lookout: taken from the path leading from South Bay Road to Headland Road 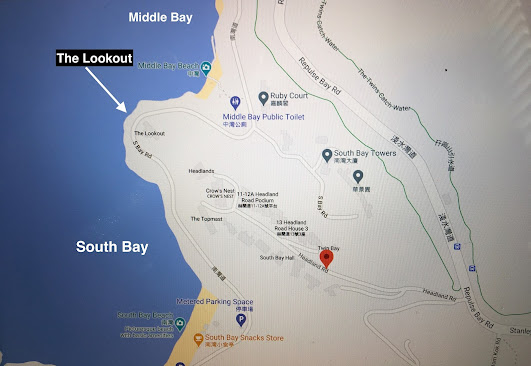 Google Maps
William (Bill) and Isabella (Ella) had experienced the Sino-Japanese war whilst living in Nanking and Shanghai in 1937/38 but war was to follow them to Hong Kong. Isabella should have been evacuated in 1940 but she was allowed to stay as she had enlisted in the Nursing Detachment of the HKVDC. Some of the villa owners in the area of Repulse Bay took refuge at the Repulse Bay Hotel. The hotel was besieged by Japanese troops from 20 to 23 December. The military garrison was evacuated to Stanley and on 23 December the civilians surrendered the hotel. Bill Ritchie stayed at his home. He would have heard the sounds of the guns firing at Stanley and the mortar and machine-gun fire around Repulse Bay.
Private Leslie Canivet of the Royal Canadian Ordnance Corps (RCOC) was billeted in a house called Twin Brook on Repulse Bay Road. Following the Japanese landings on the night of 18/19 December, he was ordered to return to the Ridge higher up Repulse Bay Road. There were five houses on the Ridge which had been commandeered by the Royal Army Ordnance Corps (RAOC). The houses were being used as a stores depot. Following a skirmish at the junction of Island Road and Repulse Bay Road, Canivet had taken refuge in a house called Overbays situated on the hillside above the road junction.  He escaped from the house which was surrounded by Japanese troops and had been set alight. He had been injured in the jaw by grenade shrapnel when the Japanese first tried to seize the house. He made his way down to Island Road and then down the steep cliffside, near a house called Eucliffe, to the rocky shoreline. He entered the water with several others and started swimming across Repulse Bay to South Bay. They landed close to The Lookout.

Four out of eight of us reached the other side. We went up to a civilian house owned by a Mr Richie. He gave us some beer and bully-beef. My jaw was too sore to eat, but I had a couple of beers. We then headed out to the mat-sheds [beach huts]. Mr Ritche had given me a pair of shorts and I picked up a shirt. He gave us directions on how to get over the hill [towards Stanley]. Despite the instructions there appeared to be no way over as it was all jungle. (Source: Affidavit by Pte L. M. Canivet UKNA WO 235/1030)

He and his group of three other soldiers were captured by the Japanese who shot them and left them for dead in a ditch. They were all killed apart from Canivet who had been hit in the left shoulder, left elbow, left hip and right hand. He must have looked convincingly dead to his captors. He did not know the names of the three dead men, except that one was a Staff/Seargent in HKVDC, one was Cpl in the RAOC and the other was a Sapper in the Royal Engineers. Canivet must have had a guardian angel, he survived the killing, he survived the aftermath of the battle and the brutal incarceration that followed, and he made it back home to Canada in 1945.
There was no mention of Ella Ritchie in Canivet's affidavit so we may assume she was working in a military hospital since she was a volunteer military nurse. She was probably at either Bowen Road Military Hospital or St Albert's at Rosary Hill. Their movements after the battle are not clear, whether Bill Ritchie was allowed to stay in his home, whether Ella was confined to the hospital, and whether they were incarcerated in the filthy and overcrowded hotels in the western district of town. We only know that they were both interned at Stanley Internment Camp. At Stanley, they were allocated a servants room in the American Quarters (after the Americans were repatriated). The servants' rooms were popular as they were two to a room. They had privacy which most people lacked. Despite their advanced years, they survived the incarceration, the inadequate food rations and the lack of medicine and in 1945 were repatriated to the UK on the Highland Monarch. Their house, The Lookout, would almost certainly have been looted and like so many, they would have lost all their possessions.
In May 1946, Bill Ritchie returned, alone, to Hong Kong and China. He acted for a period as British Consul in Mukden (now Shenyang) in Manchuria. He left China in 1947 and in 1949 the elderly couple migrated to British Columbia in Canada. In December 1969, Bill Ritchie died in Canada aged ninety. Ella died in 1978 aged ninety-four. 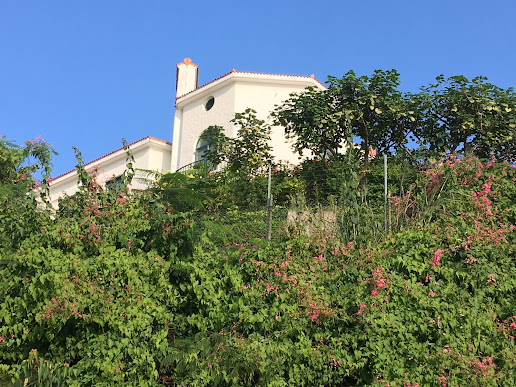 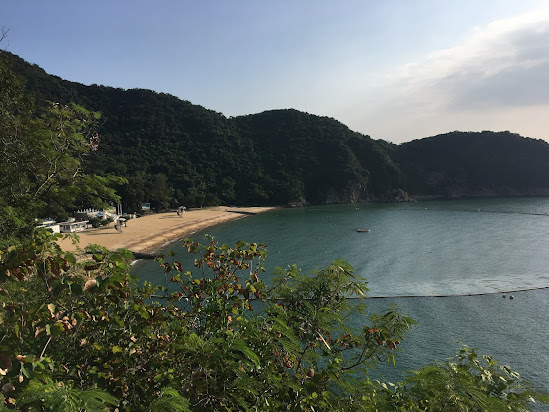 South Bay
Addendum:
After publishing this post about The Lookout and  Bill and Ella Ritchie who lived there before the war, I received an email from Patricia Hayward who had come across my blog. Her mother (Rhonwen) had been given away by Bill Ritchie when her parents married in Tientsin in 1922. Her father John (Dick) Foster Hall had worked for China Maritime Customs Service. Ritchie worked for the China Postal Service. The two families were close friends all their lives and Patricia kindly sent me some photographs of the Ritchies and of The Lookout. 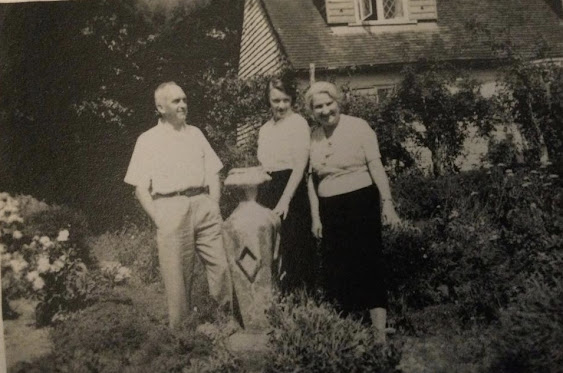 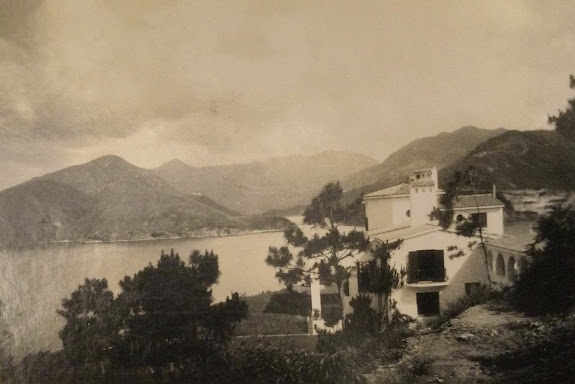 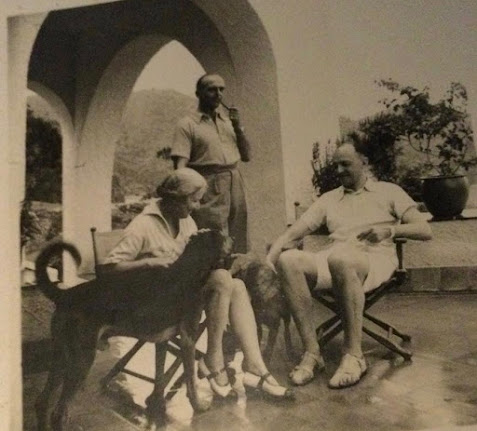