Following in the footsteps of Colonel Shoji's 230th Infantry Regiment

During the night of Thursday 18th December and the early hours of Friday 19th December 1941 the Japanese Army landed on the North Shore of Hong Kong Island. They landed two battalions of infantry at North Point under Colonel Shoji who commanded the 230th Infantry Regiment, two battalions at Tai Koo under Colonel Doi commanding the 228th Infantry Regiment, and two battalions around Shau Kei Wan under Colonel Tanaka commanding the 229th Infantry Regiment. Each battalion  consisted of approximately 1,000 men. In addition to the infantry -  Artillery, Engineers, Gendarmes and various other units were landed. Six thousand Japanese front-line infantry plus other support troops against one Indian infantry battalion, the 5th Battalion of the 7th Rajput Regiment commanded by Lt-Col Cadogan-Rowlinson. The result was inevitable. The Rajput battalion was largely destroyed on the north shore and the Japanese Army moved rapidly inland capturing the high ground.

Colonel Shoji landed at North Point, by passed the Hong Kong Electric Power Station which held out until the following morning, and established his regimental HQ near the reservoir on the hills behind North Point. The pre-war map below shows the area around North Point and the reservoir. The map also shows the track known as Sir Cecil's Ride which the 230th Regiment followed to Wong Nai Chung Gap.

The second map extract (below) shows the wider area to provide more context. The areas marked in red are restricted British military areas. Colonel Shoji was ordered to move towards Jardines Lookout and capture Wong Nai Chung Gap (WNC Gap). In fact almost the whole Japanese army and all six infantry battalions were converging on WNC Gap on Friday 19th December. WNC Gap can be seen on the map below in the centre of the Island and between the "G" ad the "K" in HONG KONG. This post is not about the invasion of the Island or the battle at WNC Gap and Jardines Lookout,  it's a photo composition of a re-enactment of the route taken by Colonel Shoji during the early hours of Friday 19th December from North Point to Wong Nai Chung Gap.


It was a sunny October day in Hong Kong and I had wanted  to follow the route taken by Shoji's troops along Sir Cecil's Ride (the Ride) which they accessed from near their Regimental HQ at the reservoir. I had often walked the Ride near Wong Nai Chung Gap but I was not familiar with the section leading from the north side of Jardines Lookout towards North Point.

The photo below shows the Chinese International School and in the  centre background is Braemar Hill Mansions, which together with Choi Sai Woo Park was built over the filled-in reservoir known as Braemar Hill Reservoir. Colonel Shoji who first saw it at night described it as a lake.
The reservoir (which was also known as Choi Sai Woo Reservoir) was built by Swire (Tai Koo Sugar Co Ltd) in 1894. A water gate with this date still remains on the northern side of the reservoir in what is now Choi Sai Woo Park.  The reservoir was purchased by Cheung Kong Group (Li Ka Shing) in 1975 and filled in to create Braemar Hill Mansions, a luxury private apartment complex on the hillside overlooking North Point and Tai Koo. The park was built some years later. The photo below taken in 1970s shows the reservoir before it was filled in and on the western side the rocky hill that I was standing on above Sir Cecil's Ride and looking down on North Point.

A Cathay Pacific Dakota crashed on the hillside to the south of the reservoir in 1949 killing all twenty-three people onboard. The plane apparently hit the 20ft wall on the north side of the reservoir. The photo below shows the crash site and the reservoir to the right.

The photo below shows the entrance to Choi Sai Woo Park. It is not very large, rather long and narrow but well maintained and a quiet oasis amongst the high rise buildings and the myriad of drivers waiting outside the Chinese International School. The care-taker lady at the entry box not only spoke very good English but knew something of its war history and the plane crash.

In the next photo I am on the high ground and paths lead up from where the reservoir was situated  to where I am standing on a hillock beside Sir Cecil's Ride. I am looking down on to North Point where the 230th Regiment got ashore, and overcame resistance from 'D' Coy 5th/7th Rajputs whose commanding officer Captain Newton was killed in action.


I think the boulder strewn outcrop (above) which overlooks North Point and in 1941 overlooked Braemar Hill Reservoir is the same rocky outcrop depicted in the war time photograph below showing Japanese troops against a backdrop of Hung Hom Wan. 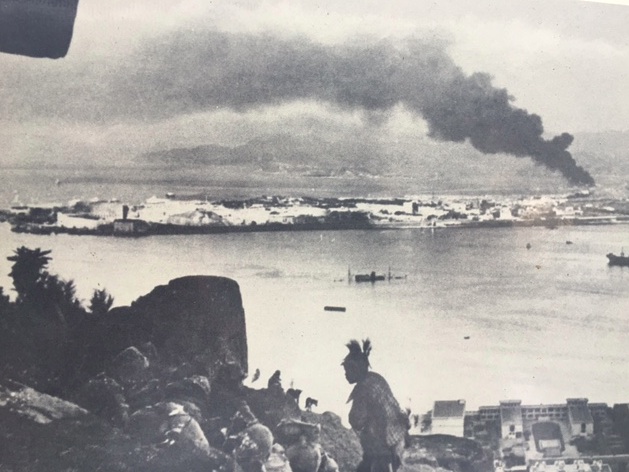 In the next photo I have turned round 180 degrees to look at the direction taken by the Japanese Army. They headed south along the Ride towards Jardines Lookout which can be seen in the centre of the photo. They headed off at around 0200 to 0300 hours.  When they got to the base of the north face of Jardines Lookout they sent one of two infantry companies up to the summit from different directions whilst the main bulk continued anti-clockwise around Jardines Lookout reaching Wong Nai Chung Gap (WNC Gap) just before dawn on Friday 19th December 1941.


The photo below is taken from the Ride looking west. Immediately below is the Causeway Bay area. the 2nd Bn 14th Punjab Regiment attacked up this slope on Friday 19th but were facing overwhelming numbers and were pushed back with heavy casualties. Large numbers of Japanese troops, supplies, artillery and support troops were using the Ride as a main supply route to WNC Gap which had been captured that morning. There were still troops holding out at  'D' Coy shelters opposite West Brigade HQ and at the two pillboxes (PBs 1 and 2) on the western slopes of Jardines Lookout.
The next photo below shows a view of the Sir Cecil's Ride along which two battalions of the 230th Regiment advanced during the early hours before dawn to attack WNC Gap. They ran into resistance from three FDLs (Forward Defended Localities) manned by No. 3 Coy HKVDC, and they ran into resistance from Canadian troops (Winnipeg Grenadiers) on Jardines Lookout.

The photo below shows Jardines Lookout and I will use it to show the Canadian positions.  Lt Birkett's platoon ('HQ' Coy Winnipeg Grenadiers) with Sgt. Tom Marsh as  2i/c held the crest. Their platoon had ascended the western slope above PBs 1 and 2 and reached  the Artillery Observation Post (AOP) on the crest at dawn just as one company of Japanese infantry arrived from the north. The Canadian troops put up a gallant fight  having been blasted by mortar and swept with machine-gun fire until they were eventually overrun.   'A' Coy WG were to the left of the crest (I think they reached the hillock visible to the left and not Mt Butler or other locations described elsewhere) and were pushed back to Stanley Gap. Further left in the col between Mt Butler and Jardines Lookout a platoon commanded by Lt Charles French was positioned. They were overran and destroyed.

This was a walk through history. I had never followed the route from North Point. I was wearing sports gear and moving fast and to my surprise it took me less than hour to get to WNC Gap from the hill above the site of the former reservoir. Colonel Shoji's battalions came along this track in the dark , carrying equipment and weapons. They would have taken longer and would have been held up by having to overcome the FDLs (referred to as JLO 1, 2 and 3) and other section posts close to WNC Gap. It probably took them between 2 and 3 hours to reach WNC Gap.

The loss of WNC Gap was crucial. Counterattacks were made throughout Friday 19th and through to 21st but all of them failed to regain the Gap. This was the beginning of the end. It was only a matter of time. The Allied troops now had to fight a losing battle, and hold on for as long as they could, which they did, until the surrender on 25th December 1941.