Lance Cpl Walter Ivan Cook, was one of several Anglo-Chileans, who served in the Royal Scots.  He was born in Chile 22 May 1917. Like many others, he answered the call of the mother country, a country he probably barely knew. He returned to Britain to enlist when war started in 1939. December 1941, found him a Lance Corporal serving with 'D' Coy 2/RS under the command of Captain David Pinkerton.  He distinguished himself in the fighting on the Mainland and was awarded the Military Medal for gallantry. It was gazetted in August 1946. 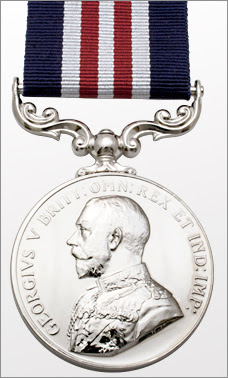 During the night on Tuesday 9 December 1941, the strongpoint known as the Shing Mun Redoubt was captured. Five casualties were left behind at the redoubt. Three of them were taken prisoner by the Japanese. One of them, Private John Casey, was posted as missing in action and was not seen again.  The fifth man was Private George Jardine. Augustus Muir, the official historian of the Royal Scots, wrote that he had been wounded in the throat in close quarter fighting but was determined he would not fall into enemy hands.  Weak from loss of blood he struggled along the ridge path known as Smugglers' Ridge. He lost his footing and fell down a ravine to the right of the ridge path. When he heard movement, and hoping it was a patrol from his battalion, he shouted out for help. He was rescued by L/Cpl Cook. The citation for the award of the MM states that he had to go forward 500 yards from 'D' Coy's front line to rescue the wounded soldier. He did this under heavy artillery fire and succeeded in bringing out Pte Jardine. The next day, Thursday 11 December, L/Cpl Cook was in action at Golden Hill which came under sustained attack by the Japanese during the course of the day. L/Cpl Cook distinguished himself in executing grenade attacks at Japanese infiltrating dead ground on the western and northern slopes of Golden Hill. He carried on despite being wounded in the shoulder by rifle fire. At one point driving the Japanese off their position with a Thompson submachine gun. The full citation can be read below. 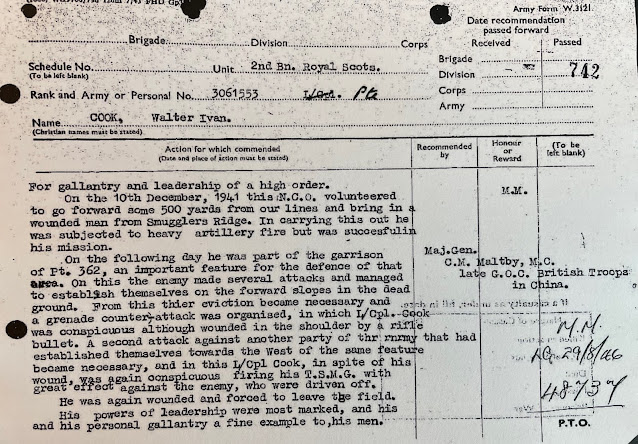 The Citation
After the British surrender on Christmas Day, Walter Cook was interned at Sham Shui Po Camp. He was shipped to Japan on the ill-fated Lisbon Maru which was sunk by an American submarine not realising the armed freighter was carrying POWs. He survived the sinking, he survived the prison camps and I assume he retuned to Chile after liberation and demobilisation.
..................
Addendum: 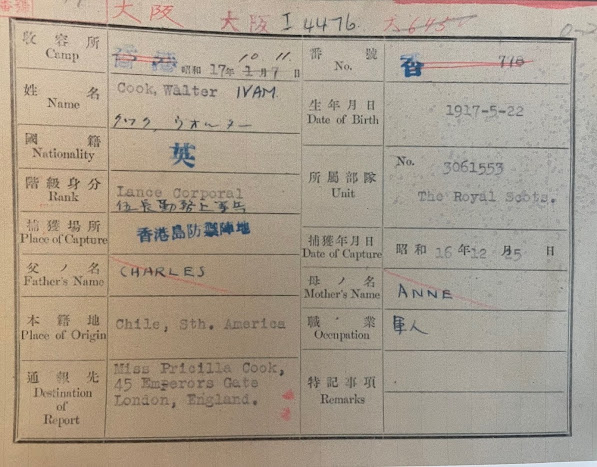