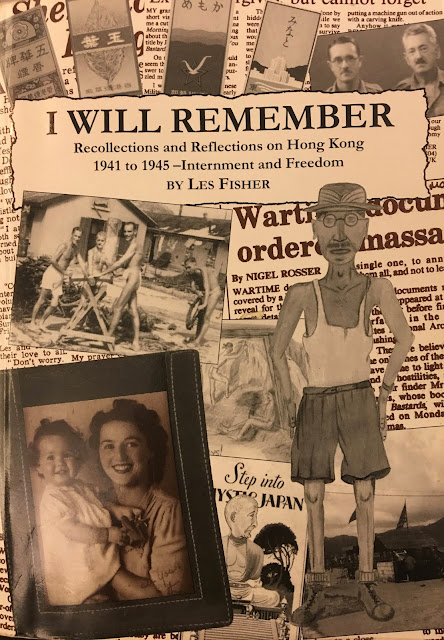 Posted by Philip Cracknell at 01:43 No comments:

There were so many unsung heroes who died during the Battle for Hong Kong and one of these was Staff Sergeant Henry James Gordon Ross, RAMC. He was born in June 1917, during one world war, and died during the next world war. He was aged twenty-six when he died in Japan on 15 May 1944. He had endured the sinking of the Lisbon Maru in October 1942, and the brutal incarceration at prisoner-of-war camps in Hong Kong, and in Kobe, Japan.

I'm only sorry that I know so little about him. He was born in London and baptised at the Church of the Holy Redeemer in Islington. His father shared the same first names. His father predeceased his mother, Clara. Ross's small estate of GBP321 went to his widowed mother. She probably only heard of his death after the war ended in 1945.
The words on his memorial stone are very fitting. "He thought of others, never himself, gave his life helping his comrades." When the Japanese armed freighter Lisbon Maru sank after being torpedoed by an American submarine, Ross was characteristically helping others rather than trying to save his own life.  Here is a report by Surgeon Lt Charles Anthony Jackson, RN which speaks of S/St Ross's exemplary conduct.

I climbed out of the forward hold [No. 1 Hold]. I found the Japanese had abandoned the ship. S/Sgt Ross, RAMC, reported that he had a number of injured and sick mustered on deck from the holds aft. Between us we managed to render first aid and reassured disabled men. I was myself picked up after about four hours together with S/Sgt Ross and such ailing men as we had been able to keep with us. Throughout this period and subsequently as the medical orderly in charge at Kobe Camp, S/Sgt Ross, RAMC, displayed great devotion to duty and courage.

He saved many lives and eased the suffering of others whilst at Kobe Camp. He is remembered by Captain Martin Weedon, 1/Mx, a POW at Kobe House Camp.

He died of beri-beri on top of a stomach ulcer. Very sad as he has done more than anyone for the sick. I owe my life to him when I had diptheria.

He was starved to death by the Japanese who provided insufficient food and medicine and forced their prisoners of war to carry out slave labour in docks, mines and factories. So many lives were lost needlessly to malnutrition. At such a young age he devoted himself to alleviating suffering in others.  For one so deserving, he never had the chance to marry, or know fatherhood,  and live his life.

After the war, he was awarded a posthumous Mention in Despatches (MiD).