Patrick Fallon, together with two of his three brothers, served in the Hong Kong Volunteer Defence Corps (HKVDC) during the Battle for Hong Kong in December 1941. After the Christmas Day capitulation, Patrick and his brothers were incarcerated in POW camps in Hong Kong and Japan.  His father was interned at Stanley Camp with Patrick's sister and one of his brothers. Patrick's Chinese mother was not initially interned and remained at the family home in Kowloon but later she became an inmate at Rosary Hill Red Cross Home established in 1943 for the dependents of British soldiers and internees. The whole family were incarcerated in Japanese prison camps for three-and-a-half years. 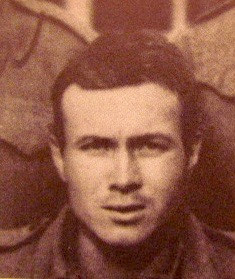 Patrick Fallon as a POW in Japan (Source: Tony Fallon)
The story starts with Patrick's father, Christopher Patrick Fallon. He was born in Wicklow, Ireland in March 1888. After initially serving with the Royal Irish Constabulary, he joined the Hong Kong Police Force in November 1912. His Police Number was '140'.  This number would have been worn on his uniform collar. He served in the HK Police for twenty-one years. He was awarded the Merit Medal in 1919. In 1928, he received a commendation from the Governor, Sir Cecil Clementi. By the time he retired in 1933, he had been commended on six occasions and reached the rank of Chief Inspector. After retiring he became a Probation Officer and ran a remand home in Causeway Bay. He married a Chinese lady, Sai Mui Leung. They had four sons, Patrick, John, William and Peter and a daughter Mary. Another daughter, Alice, died during childbirth.
During the Battle for Hong Kong in December 1941, Patrick served in the Field Ambulance, John and Peter served with Field Coy Engineers. Patrick, at nineteen,  was the oldest. His youngest brother, Peter, was only sixteen-years-old and was the second youngest soldier to serve in the HKVDC during the battle.

I had another brother [William] who wanted to volunteer, but they would not let him because there were already three of us joining. I should have recommended this to be a film 'Saving Private Fallon'. During the battle,  I was in action only once, exchanging fire across a long valley in darkness when I fired a maximum of five shots. However, I did come near to death when I was visiting my parents during the fighting while walking along the street. I heard a loud clanging noise and this piece of smouldering shrapnel from an artillery shell landed right in front of me. (Source: Speech by Patrick Fallon at the British Embassy in Tokyo April 2005)

The Royal Engineers together with Field Coy Engineers (HKVDC) were responsible for demolitions at the frontier and on routes leading from the frontier towards the stop line known as the Gin Drinkers Line. The demolitions were carried out on road bridges, cuttings and tunnels. Patrick's brothers were involved in these demolitions before being withdrawn to Hong Kong Island. After the capitulation, the three bothers were incarcerated at Sham Shui Po (SSP) Camp. At SSP Camp, they were on starvation rations, treatment was brutal, and diseases like diphtheria and dysentery were rampant.
Their father, Christopher, was interned at Stanley Camp together with his seventeen-year-old son, William and his fourteen-year-old daughter Mary. They were billeted in Block 11 which was the former science block of St Stephen's College. Christopher's Chinese wife, Leung Sai Mui, was not interned.   She stayed at the family home at 10, Peking Road in Kowloon. It would have been difficult and dangerous eking out a living in Japanese occupied Hong Kong. Food was in short supply throughout the occupation. She became an inmate at Rosary Hill Red Cross Home in 1943 where at least a meal was provided.  Christopher and his wife remained in Hong Kong after the war. He passed away in 1961 aged seventy-three and was buried at Happy Valley. His wife, Sai Mui Leung, passed away in London aged eighty-seven in 1978.
In September 1942, Patrick, John and Peter were loaded on to the ill-fated Japanese freighter Lisbon Maru as part of the second draft to be shipped to Japan to work as slave labourers in dockyards, mines and factories. They were lucky because they were amongst one hundred POWs who were taken off the ship because it was overloaded. While on passage to Japan, the ship was sunk by an American submarine, not realising that it was carrying British POWs and over 800 POWs lost their lives. In January 1943, just after receiving news from their mother (see the postcard in the photo gallery below), the brothers were shipped to Japan as part of the third draft on the former liner Tatsuta Maru. They worked at the Hitachi Dockyard at Innoshima some thirty miles from Hiroshima. All three brothers made it back home having survived the incarceration in Hong Kong and Japan.
In 2005 at the age of eighty-three Patrick Fallon returned to Japan on a reconciliation trip organised by Keiko Holmes. Keiko Holmes was born in Japan in 1948. She married Paul Holmes in 1969 and later returned to London with her British husband and two children. Paul was killed in a plane crash in 1984. Keiko had become a devoted Christian after her marriage. She remembered the memorial in her home-town of sixteen British POWs who had worked as slave labourers in a nearby copper mine. The memorial which bore the name of each POW was lovingly and respectfully cared for by local civilians even long after the war. This memory, and in grief for her husband, prompted her to set up a charity that would arrange reconciliation trips for former POWs to Japan and other parts of Asia. Many POWs found it difficult to forgive the Japanese for their brutality and still harboured much resentment for the atrocities, killings, beatings and the appalling treatment that they were subjected to in prison camps in Japan and in Japanese occupied territories in Asia. On these trips, the ex-POWs would sometimes meet their former guards and foremen in the factories, docks and mines where they had once been forced to work.

Patrick Fallon summed up his thoughts at the time.

For me I have forgiven but I shall never forget. For others who have been Japanese Prisoners of War it is not so simple and I ask you to respect that as well. (From Patrick's   speech at the British Embassy in Tokyo in April 2005)

Patrick Fallon was an old boy of La Salle and St Joseph's College. He and his brother John were amongst the first to enrol at La Salle in September 1932.  They moved to St Joseph's College after their father moved to HK Island. Patrick graduated in 1939 and became an apprentice engineer with Whampoa Docks. He passed away in London aged 91 in 2014. 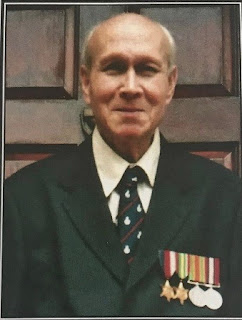 Tim Gibbs: For putting me in touch with Tony Fallon.

Tony Fallon:  For providing me with information about his family, in particular relating to his father, Patrick Fallon and his grandfather, Christopher Fallon,  and their experience during the Battle for Hong Kong and their subsequent incarceration. 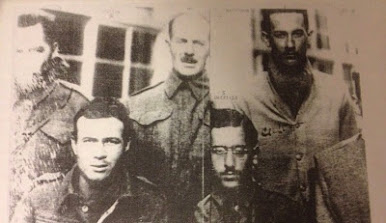 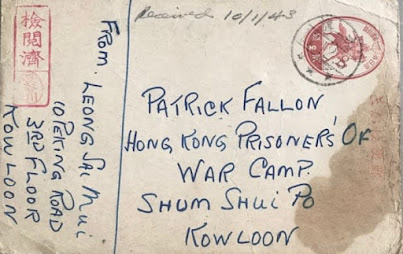 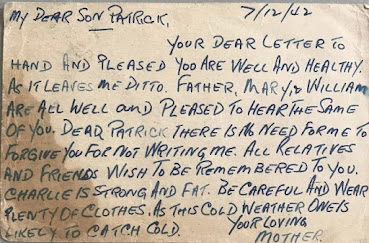 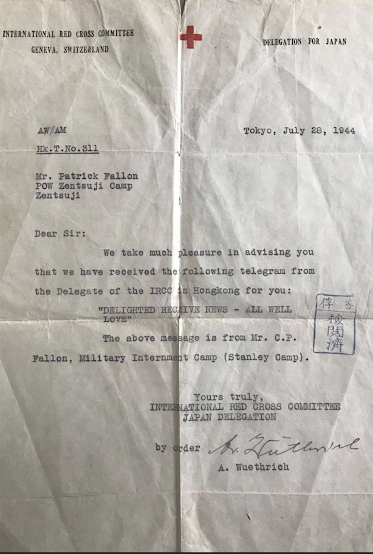 Letter from IRC to Patrick with a message from his father at Stanley
Posted by Philip Cracknell at 21:31