Compulsory military service was introduced in Hong Kong during 1939 for British nationals.  A large number of Portuguese, Eurasian and Chinese volunteered to join the militia either the HKVDC or the HKRNVR although they were not compelled to do so. A number of the British expatriate staff in the banks were categorised as Essential Services and were required to remain with their banks in the event of mobilisation. In the case of the Chartered Bank, four out of the ten expatriate managers were categorised as Essential Services. A state of emergency was declared in Hong Kong on 7 December 1941 and those serving with the Volunteers reported to their units. The next morning (Hong Kong time) the Japanese attacked Hawaii, Hong Kong, the Philippines, Singapore and Malaya. Hong Kong surrendered on 25 December 1941. Those bankers who had served with the Volunteers were incarcerated in POW Camps. Those working for the British, American and Dutch banks who had remained in their civilian role during the battle were interned in late January 1942 at Stanley Civilian Internment Camp. However, a number of these bankers were kept out of internment camp to assist the Japanese officials in the liquidation of the so-called 'enemy banks'.

There is quite a lot of information in archives, books, and diaries about HSBC and the Chartered Bank during the wartime period. There is much less about the Mercantile Bank and its staff. I looked for Donovan Benson on the log of internees but he was not listed so he must have left Hong Kong, either on leave, on a business trip, or to a new posting before 8 December 1941. I wanted to find out a bit more about the Mercantile Bank, their former Manager, Donovan Benson, his successor as Manager,  Harry Hawkins, and the other managers who were in Hong Kong in December 1941.

William Ramsay  Accountant:
He was born 20 August 1903. In December 1941, he was called up for service in the commissioned rank of 2/Lt and served with 5th AA Regiment, Royal Artillery. He served with the Regular Army rather than the militia. This suggests that he had previous military service. He went straight from the banking hall in Queens Road to the guns. In 1941, he lived at No. 8 The Peak on Mount Austin Road. He was married to Lorna Mary. She was interned at Stanley Camp with sons Michael (1939)  Ricard (1942). Her son Richard was born in camp on 29 January 1942 within a week of her entering camp. This was the second baby to be born in Stanley camp. After the war,  Hobbin resumed his duties with the Mercantile Bank under his old boss Donovan Benson. passed away in 1989.
Barry O'Meara Deane, Assistant Accountant:
He was born 12 October 1911 in Kerala, India. During the battle in December 1941, he served in No 2 Bty HKVDC. He was transhipped to Japan on the 3rd Draft in January 1943. His wife Winifred (Win) Barbara was an ANS nurse and was incarcerated at Stanley Camp. She was in Block 10 (known as the Annexe or Hostel).  She shared a room with Ray Mabb and Margery Matthews. They were both volunteer military (HKVDC) nurses. Margery's husband, a Volunteer, had been commissioned during the battle and attached to 5/7 Rajputs. He was killed on the north shore shortly after reporting for duty.

Win was a keen bridge player, loved to smoke more than anything and was twenty-two when interned. She was born and raised in Shanghai and met my father in China when he went for R&R after a rugby injury in 1940. He used to play rugby for HK. They married in the then Peak Church in July 1940. (Philippa Deane - Stanley Email Group)

Barry and Win had a daughter Philippa (quoted above) born after the war. They retired to Brighton. Deane passed away in June 1998

Douglas Haig Hamilton, Sub Accountant:
He was born in Edinburgh on 9 May 1917. He served with Corps Signals, HKVDC. After the British surrender, he was incarcerated in Hong Kong and later in Japan (Camp Innoshima Hiroshima 5B). After the war, he married Elizabeth Nicol, a nurse. They had two children. He returned to the Far East in 1946 and was posted to Singapore/Malaya. The Mercantile Bank was acquired by HSBC in 1959 and Douglas Hamilton continued his career with HSBC. He retired to the UK and passed away in October1999.
Harry William Hawkins, Manager:
Harry Hawkins was born in February 1897. He served in the First World War as a Lt in the Essex Regiment. He was wounded but reportedly saved from more serious injury when the bullet passed through a leather pocketbook. He was posted to Hong Kong during 1941 and in the absence of Donovan Benson, he was  Manager of the Hong Kong office in  December 1941 when the war began in the Far East. From Monday 8 December, Hawkins was short-handed as all three of his British managers had been mobilised. Likewise, a number of the Chinese and Portuguese staff had been called up to serve in the volunteers or in the various civil defence units.

Hawkins was initially interned with other 'enemy bankers' at the Sun Wah Hotel, a cheap boarding house which had been a former brothel. Each morning they would be taken from the Sun Wah Hotel to assist with the liquidation of the British, American and Dutch banks. In 1943, the bankers were interned at Stanley Camp. Hawkins was billeted in Bungalow D (a former staff bungalow in St Stephen's College). After liberation, he returned to the bank's offices which were largely intact. Hawkins was repatriated to the UK. In October 1945, Benson returned to Hong Kong to re-establish the Hong Kong branch. Hawkins passed away in 1961 in Croydon,  at the age of sixty-four.

Donovan Benson:
He was born in Hornsey, Middlesex in January 1896, the second-born of four brothers. His father was a Bank Manager working with the London & Provincial Bank. Donovan Benson and his elder brother, William Benson, worked as bank clerks in the City before the outbreak of the First World War.  At the age of eighteen, in 1914, he and his older brother joined the 2nd County of London Yeomanry (known as the Westminster Dragoons), a London based militia. 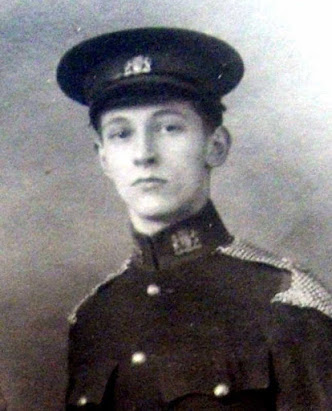 Benson in the uniform of the Westminster Dragoons (Source: Hazel Hewitt) 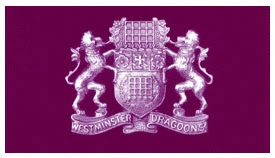 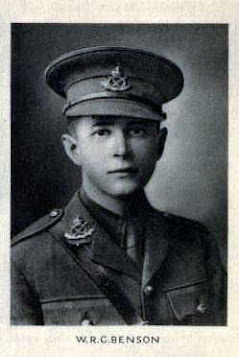 Donovan Benson served with the Westminster Dragoons in Egypt and the Mediterranean-theatre. He was seriously wounded in 1915 at Gallipoli. He was said to have been struck by a bullet in the jaw which had passed through several sandbags. A military record states that he was entitled to wear a 'wound stripe' on his uniform sleeve. He was sent back to the UK for an operation and medical treatment. After recovering, he was, like his brother, picked out for advancement, and commissioned as a 2/Lt in the South Staffordshire Regiment.

I am not sure whether he worked for the Mercantile Bank before the First World War, but after the war, in 1919, he was working with the Mercantile Bank in Singapore. He developed a passion for horse racing and polo. He worked with the bank in locations like Singapore, Kuala Lumpur and Georgetown. He played polo and was team captain in Singapore and Penang.  In 1923, he married Mary Elizabeth Thomlinson in Singapore. In 1925, their first son, Donovan Roy Benson was born and in 1928 a second son, William Jeffrey Benson was born. The couple also adopted a girl, Patricia Lee.  In 1937, he became Manager of the Hong Kong branch of the Mercantile Bank. In the 1941 Jurors List, his address was given as 302, The Peak known as 'Galesend' and situated close to Jardines Corner and the Peak Curch. 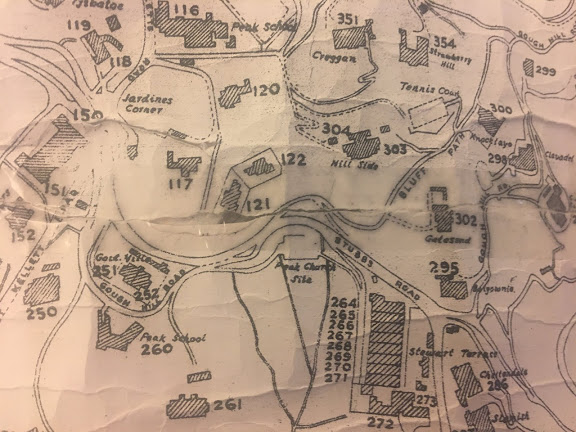 One thing that is not yet clear is where Benson spent the Pacific War years from December 1941 until October 1945 at which time he returned to Hong Kong to re-establish the Mercantile Bank. There is a record of him travelling from London to Colombo, Ceylon in February 1945. He may have been at the London Head Office or in India or Ceylon. One report suggests that when the war began 'he happened to be out of town' i.e. on normal bank business or perhaps on long leave.

Benson retired from the Mercantile Bank in 1952 at the age of fifty-six. He was awarded the OBE for his work and public service. After retiring he decided to make Hong Kong his home. He became Chairman of the Hong Kong Jockey Club. He was Chairman for fourteen years from 1953 to 1967. Over the years in Hong Kong, he owned several racehorses. He took over the chairmanship of the Jockey Club from Sir Arthur Morse, the former Chief Manager of HSBC. He oversaw a period where the Jockey Club became active in distributing its surpluses as charitable donations. It was at this time that the prefix 'Royal' was adopted in 1966.

Benson was a well respected and well-known public figure in Hong Kong. He held many directorships and committee memberships. He was Chairman of the South China Morning Post, an unofficial member of EXCCO in the absence of Sir Arthur Morse. He was President of the Boy Scouts Association (1959/64). He was Chairman of St John Ambulance Brigade (1953/54), a Director of the Diocesan Girls School and a Director of the Hong Kong Tuberculosis Association. He was on the board of the Hong Kong Society for the Protection of Children and he was a Justice of the Peace for many years.  He was always willing to give up his time for good causes and charitable work. His wife, Mary, passed away in 1957 at the early age of 62. They had been married for thirty-four years. Benson passed away, aged 76, at his apartment in Brewin Path, Mid-Levels in November 1972.

As I researched this article, I found information on Donovan Benson a bit hard to find. Yes, I suppose he belonged to another generation, and lived in a different Hong Kong, but not so very different and Hong Kong still benefits from the causes he sponsored. He helped rebuild his bank and Hong Kong in the aftermath of war and the devastation of the brutal Japanese occupation. Although he spent many years in colonial Hong Kong, a banker, a philanthropist and a public figure, there are few today who would remember him but I think he deserves to be better remembered for what he achieved, the life he led, and because he made a difference in everything he undertook. 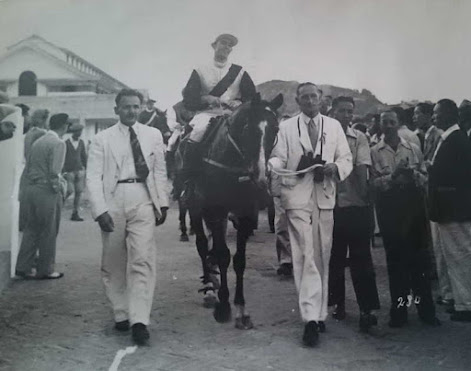 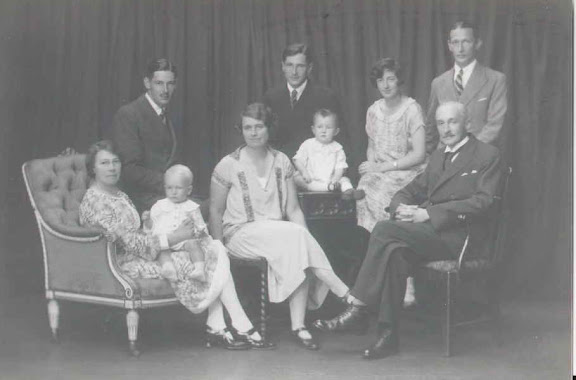 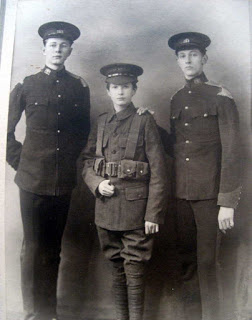 I would like to thank family member, Hazel Hewitt, for allowing me to use family photographs and for her help with regard to the information on the Benson family. My thanks to Philip Trumble for information relating to Douglas Hamilton.

Posted by Philip Cracknell at 05:51 2 comments: