In December 1941, there were three 9.2-inch guns on Mount Davis they were numbered from the lower gun: F1, F2 and F3. F3, being the topmost gun, had the widest traverse for landward firing although still blocked to some extent by terrain around the Peak. Jubilee Battery consisting of three 6-inch guns was situated below Mount Davis and was unable engage in landward firing as the battery was completelty blocked by terrain on the landward side. The gun in the photograph is F2. The middle gun. In fact, you can see the numbering 'F2' painted on the gun emplacement (lower middle). I'm not sure of the date of this photo but I would think early-1930s. 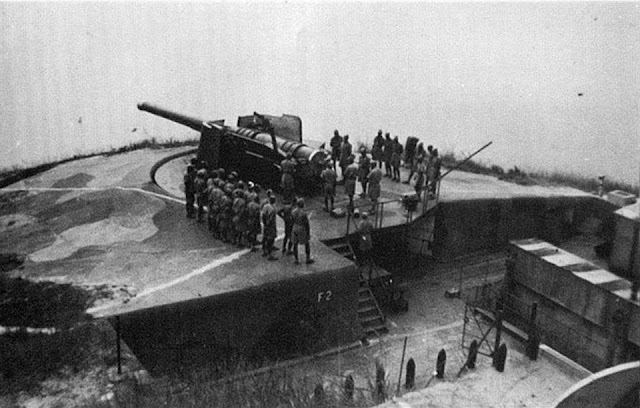 Adaptions were made to these three gun emplacements. F2 for example had a blast wall constructed at the rear as can be seen in the photo below.  When the battery was completed in 1912 there were five 9.2-inch gun emplacements. At that time, there were two other gun emplacements between F2 and F3. These two guns were moved to Stanley in the mid-1930s. 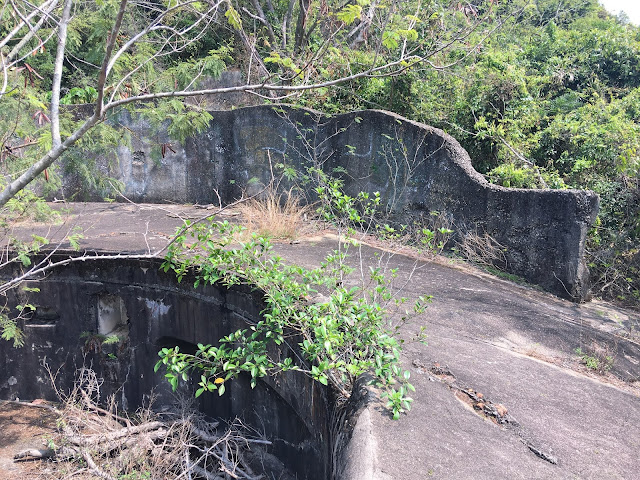 On a recent visit to F2 we found the usual ammunition lockers with steel doors  missing as below: 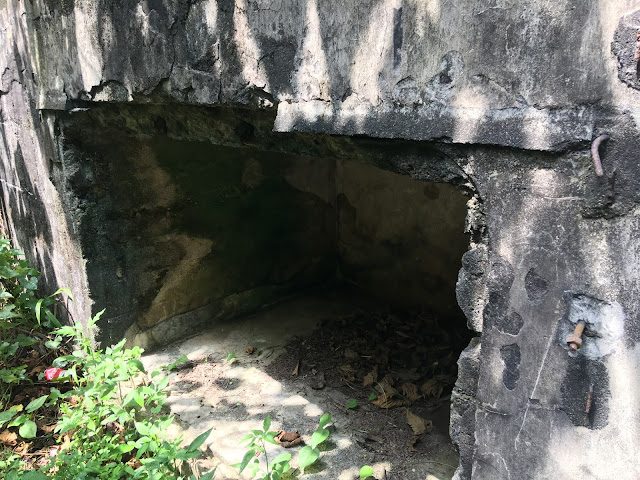 Steel doors removed - Ammunition lockers
The photograph below shows the access and hoist to the underground magazine. The magazine pit was about 8 to 10 foot deep. 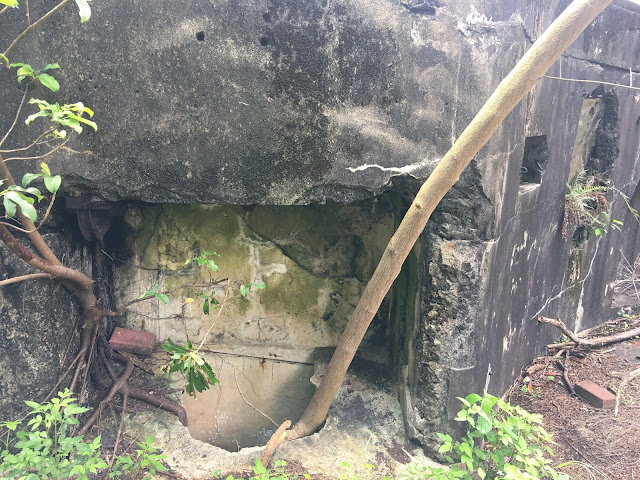 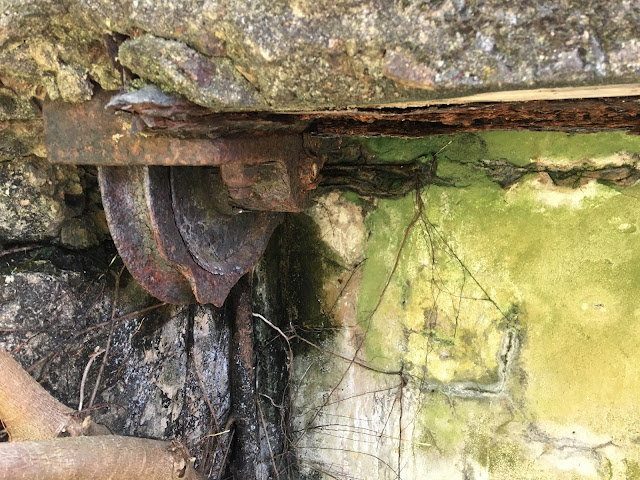 In addition there were two 3-inch AA guns situated on Mount Davis, but these were part of the 5th Anti-Aircraft Regiment.

Western Fire Command HQ was based in the complex of rooms which included the Fortress Plotting Room (FPR) until it was penetrated and put out of action by Japanese shelling. Western Fire Command then relocated to RN Port War Signal Station on the mid-slopes of Mount Davis. The damage to the Plotting Room area occurred on 16 December. The shell was  a 24cm (9.45-inches) shell fired from a Japanese siege mortar, the largest calibre artillery piece employed in the battle.

A 24 cm dud worked its way through a ventilation shaft and finished up behind a signal test frame. There were some twenty men in the plotting room at the time but no one was injured. The Fire Direction Table was undamaged but as the Plotting Room was neither weather nor shell-proof and all the instruments smothered in dust and debris, the two remaining guns [F3 had been put out of action by another dud 24 cm shell on 13 December] were connected up to the position finder direct. (UK National Archives)

RSM Ford was in the Plotting Room. He described the destruction in his personal war diary.

Today the Mount has received its bitterest and most intense bombardment. The plotting rooms [Note by Author: the plural suggesting the Fortress Plotting Room and Western Fire Command was in a collection of rooms in the underground bunker of which more later] and barrack rooms have been blown in and at about 5 o'clock we had to evacuate under shell-fire in parties of five. BSM Barlow and myself established order in the Battery Plotting Room amid smoke and fumes. Our lights are out and blower plant disabled and daylights visible through the roof. This roof was once a thickness of 15 ft of earth and concrete. A shell penetrated right through a steel door, ripped all the bricks from one wall [note the use of brick walls which we will see in our exploration of the bunker later] ploughed through another wall and finished up in the Telephone Exchange [a separate adjoining room] without exploding. Truly a miracle. All our troops are intact except one sergeant shell shocked and one gunner wounded.

Ford describes how the undamaged Fire Direction Table was ordered to be destroyed. I assume he means the plotting table. These tables were large, made of steel, and had concrete support legs. Brigadier Wallis used the Plotting table at East Brigade HQ at Tai Tam Gap to spread out his maps and telephones. The photograph below shows the Fortress Plotting Room  at Tai Tam Gap and the concrete support legs still in situ. 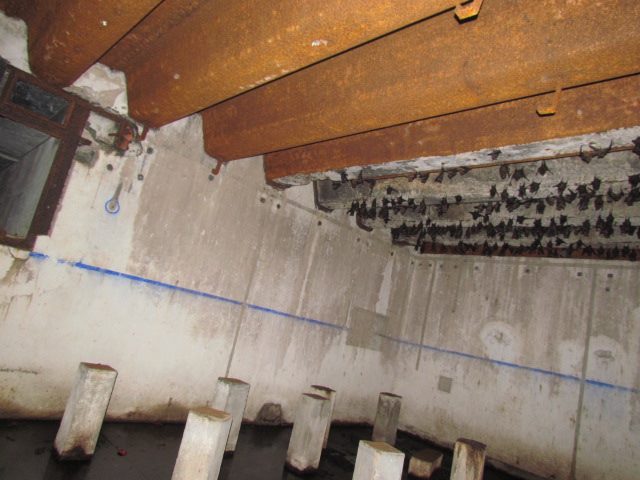 It looks like there are around eight concrete legs. Notice the steel roof and the concrete (rather than brick) walls. Also notice the colony of un-agitated bats and the bat excreta on the floor. Not my favourite place to visit but it has to be seen. We found a number of these concrete legs mostly broken up when we explored the underground bunker at Mount Davis.  There was a colony of bats in the underground bunker and although there were less of them they were flying around, no doubt agitated by our intrusion.

Exploration of bunkers at Mount Davis

We were able to gain access, but normally a padlocked door prevents entry to the seven largely intact rooms.  Two other areas which I label in the diagram below as 8 and 9 have been destroyed. No 8 was destroyed by war action. No. 9 was damaged and may have been demolished after the war because they were unsafe. 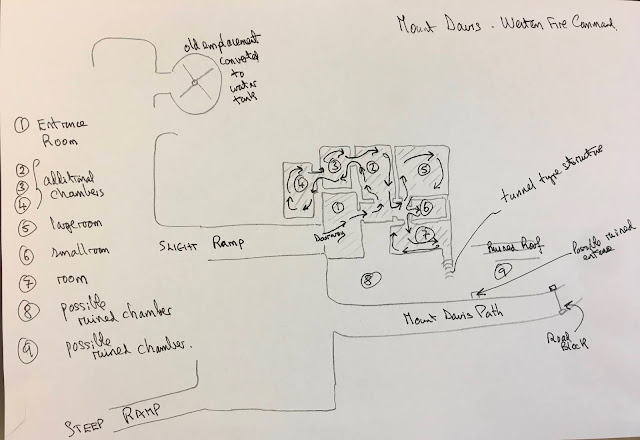 Room 1 was the entrance room and contained brooms and some other equipment. In the photo below you can see the entrance door which is normally locked. This was the only room that had been used for storage. The other rooms are not used. The roof in Room was comprised of steel girders (like the FPR at Tai Tam Gap). 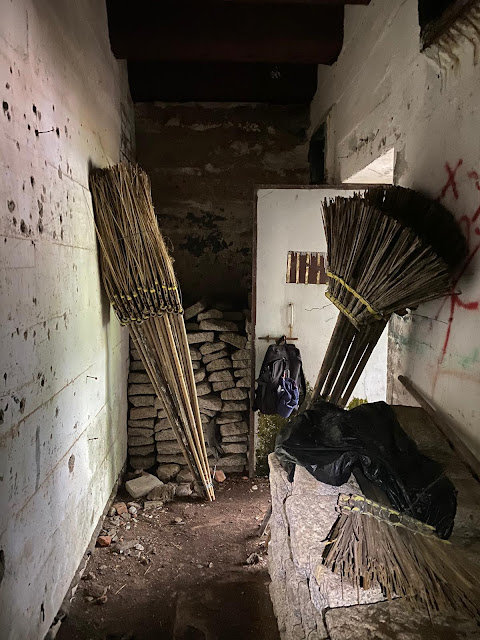 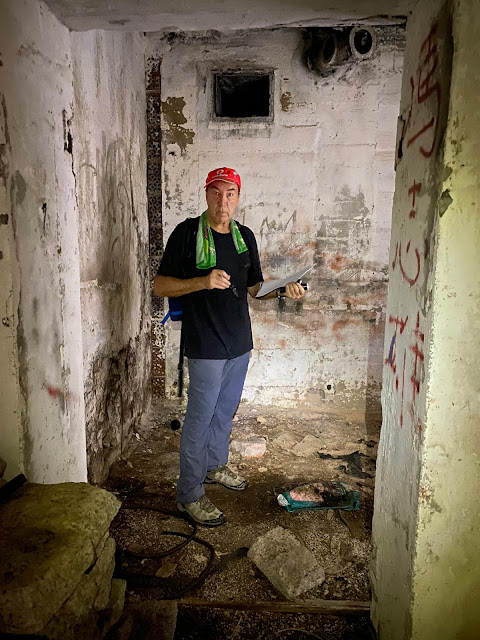 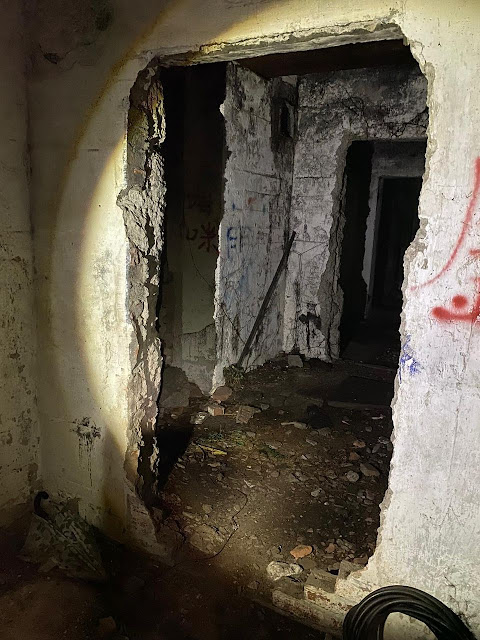 Various rooms lead off from a central chamber (Photo: Author) 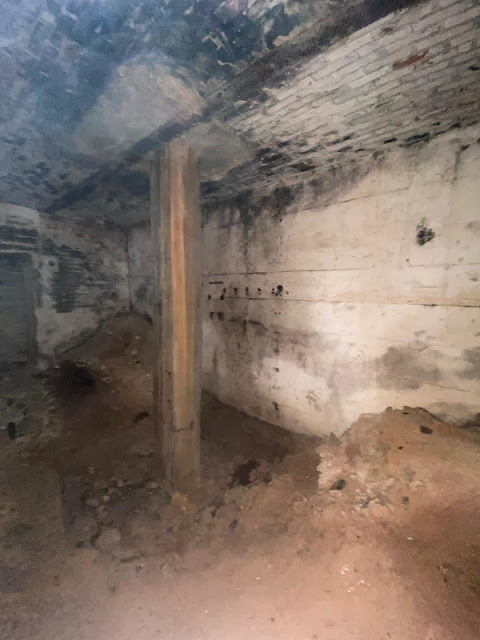 Room 4 with central pillar but the room is too small to be Plotting Room
(James Lewis)
One thing we can not be sure about is whether the pillar was added after the war to block the hole in the roof created by the shell and to add support for the installation that has been built in this area above ground. This rather narrow room accessed from Rooms 2 and 3 has a sealed door leading from it (see photo below). We are not sure where this leads to. 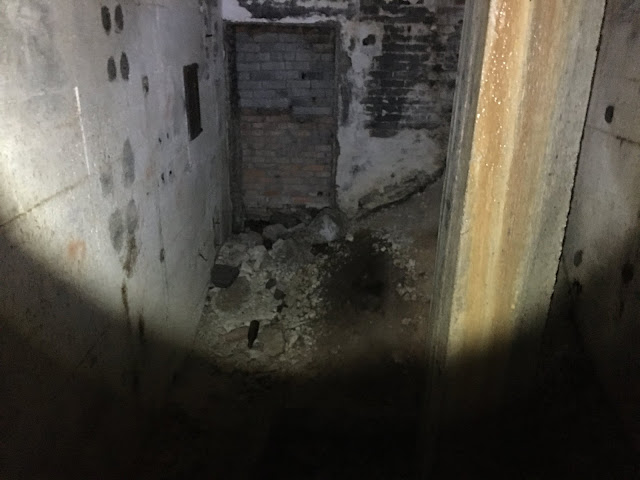 The pillar (absent in other rooms) and the bricked up doorway. (Photo: Author) 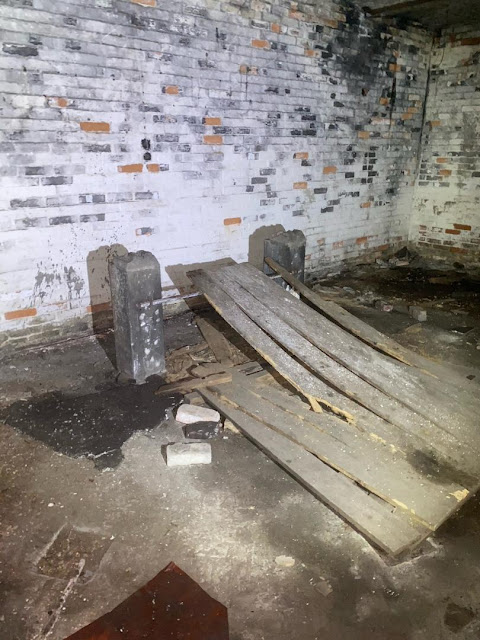 Room 5 may have been the FPR - it is the largest room and it has what might be two concrete plotting table legs - there were others broken up concrete legs in the other adjoining rooms. 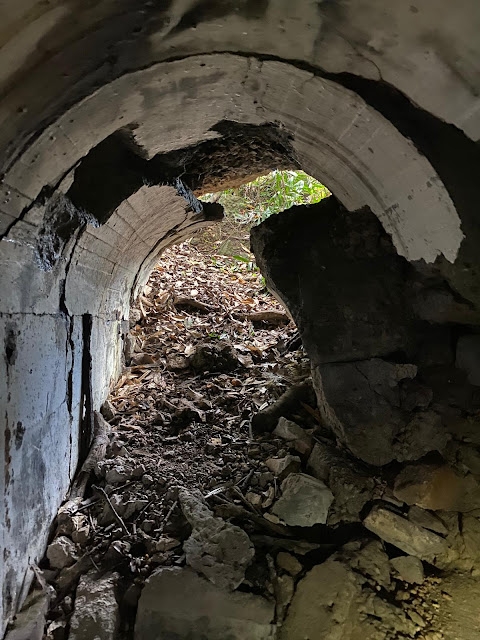 This tunnel portal may have led to Room 9. 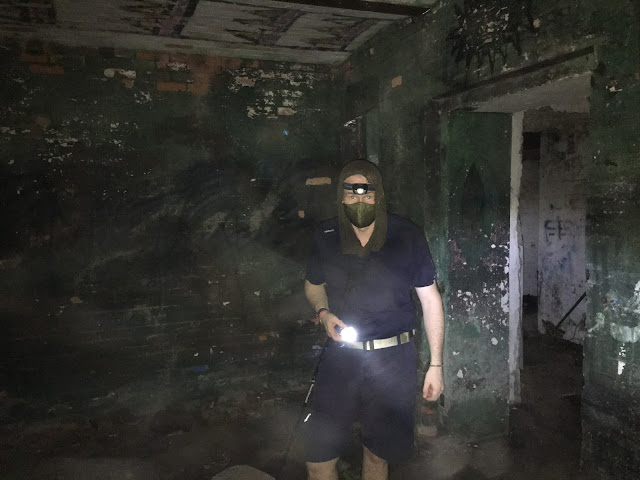 Originally the roof of this area contained the 3rd gun (from the bottom). This gun was removed in mid-1930s and taken to Stanley. The photo below shows the gun emplacements for No 3 and No 4 ( the removed guns). No 4 was converted into a water reservoir.  No 3 emplacement was probably filled in. Photographs (further below) seem to show the blast  wall around part of the emplacement. After the war the area of the 3rd gun emplacement was built over. 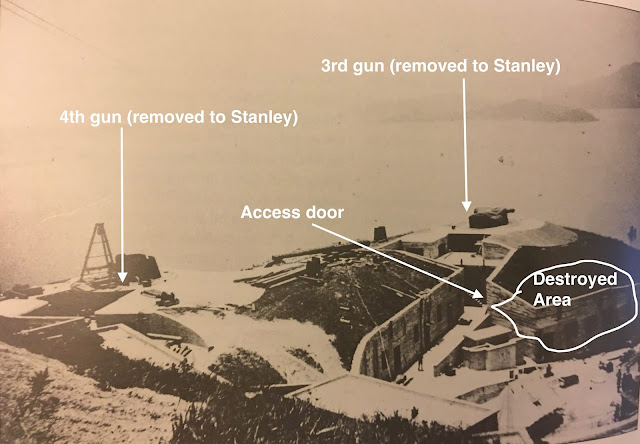 The bunker was situated under the 3rd gun. (Photo from The Guns & Gunners of HK)

It is possible that the bunkers we explored may have been part of the magazine for the 3rd gun (courtesy James Lewis).  The destroyed area marked in the photo can be more clearly seen in this post war photo taken when the RAF manned Mount Davis using it as a radar station. 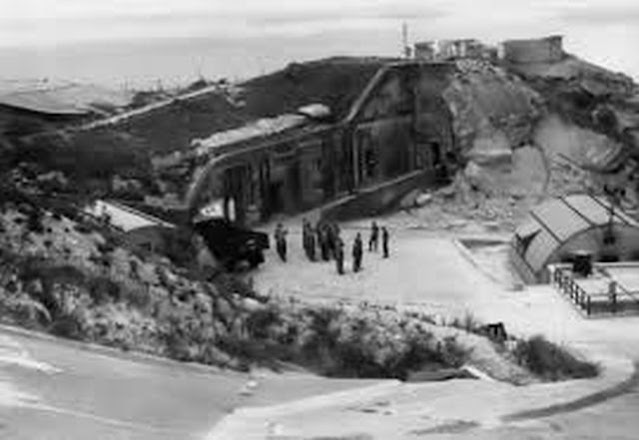 This photo seems to show the empty emplacement with what looks like a blast wall (as at F2) and no doubt added on after the emplacements were built. The photo shows the considerable damage  to the area described as Room 8 in the sketch map. The next photo dated is 1987 and is interesting as it shows what may be the facade of Room 9 in the sketch map.

1987 Photo showing extant military structures at or near Room 9
(By kind permission of Gwulo and 367 Association)
The 1987 photo shows the Youth Hostel and interestingly that section of battery buildings  (marked as Room 9 in my sketch map). These are now demolished but when and why? Possibly they were unsafe and it looks like only the facade was extant. The photograph  below taken was from Guns & Gunners of HK and indicates that this is a 1946 photo showing the bomb damaged Fortress Plotting Room - and note there is a pillar as in Room 4  but this is where the similarity ends. The room looks bigger as does the pillar. So where was the FPR ? 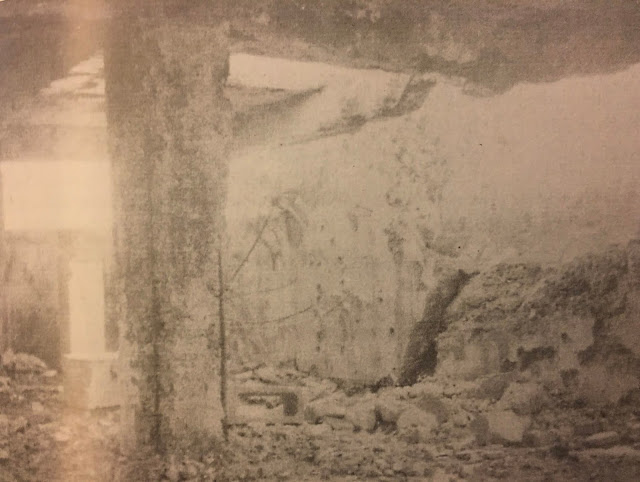 I may have raised more questions than answers, but I hope the study will be of interest to readers and at least thought provoking. We can say the Fortress Plotting Room was situated most likely in Room 5 and possibly Room 8, but we cannot be sure. The complex that made up the Plotting Room, and Western Fire Command HQ, no doubt consisted of several separate rooms, for example, a room for the Telephone Exchange and a room for the plotting table. Room 4 is the only one with a pillar but it is a narrower room than the one in the 1946 photo and what looks like an open doorway (see photo above) in the right-hand corner of the room does not match Room 4 today.

Room 4, as of today, does have a bricked up portal but it is in the left-hand corner of the room. The main problem with Room 4 is it is too narrow to have contained the plotting table. However, this room (Room 4) could have been the room where the shell first entered the FPR complex. The brick built rooms, like Room 5, may have been originally used as the  magazine for the removed No 3 gun and possibly the nearby removed No 4 gun. We can see from the post-war photos taken during the RAF period at Mount Davis that the building (in the area we describe as Room 8) was very extensively damaged.

Room 8 may have been the Plotting Room or it may have been the room where the shell first entered, which would explain the extensive damage. Given what limited information we have, I tend to think it was Room 5 that contained the Plotting table with its two standing concrete legs still extant. It was probably the most protected room being directly under the old No. 3 Gun. If I had to hazard a guess - I would say the shell first entered through the roof of Room 8 and that Room 9 was an accommodation block. As always interested in reader's comments and thoughts as to the layout.

Posted by Philip Cracknell at 19:29