In the two to three years before the Pacific War began, some seventy pillboxes were constructed at intervals around the shoreline of Hong Kong Island. The combination of pillbox and Lyon Light (searchlight)  is referred to as a Beach Defence Unit (BDU). They differed from Line of Gap pillboxes and Gin Drinkers Line PBs which were not equipped with searchlights. The Lyon Light (LL) was contained in a reinforced concrete structure manned by two men. The LL structure was normally positioned 10 to 50 metres from the PB.  The LL communicated with the PB by voice pipe.  The LL had retractable bunks on the rear wall to sleep the two-man crew. There was a steel entry door and there were steel shutters around the searchlight aperture. The light was powered by a petrol engine with an exhaust outlet in the back wall. The  were connected to Coy HQ and other PBs by telephone line.

In this article, we will focus on four BDUs located on the east side of Tai Tam Bay as illustrated in the wartime map below. These four PBs were manned by 'D' Coy 1/Mx. The were manned from 7 December until 19 December when all troops in the eastern sector were ordered to withdraw to Stanley. 'D' Coy garrisoned the Maryknoll Mission House at Stanley. A large number of 'D' Coy were killed in action or executed after having been taken prisoner at Stanley. 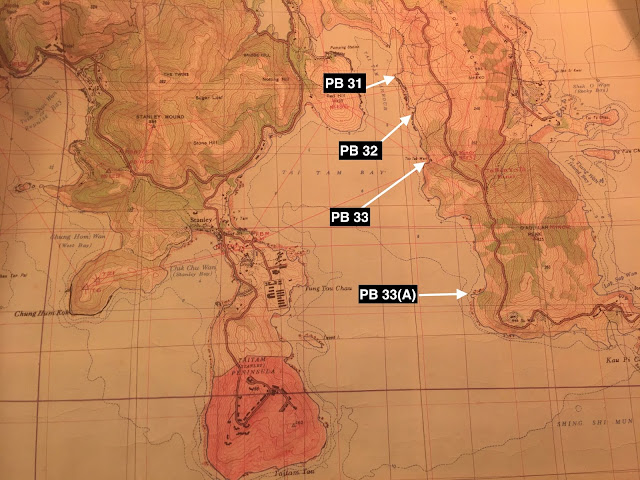 This is a 4-loophole PB situated on the beach at Tung Ah Tsuen village. This PB is situated quite near Obelisk Hill where both  'D' Coy Royal Rifles of Canada and 'D' Coy 1/Mx had their Coy HQ. On my visit in October 2020 - I started at Obelisk Hill and followed a path that led to the beach. From there we clambered over the rocks along the shore-line to look at PB 31 and PB 32. The commander of this PB (PB31) was Cpl Albert Devonshire. survived the battle and incarceration. 31to 33 were under the overall command of 2/Lt Gurth Blackaby, 1/Mx who was killed in action on Christmas Day 1941. 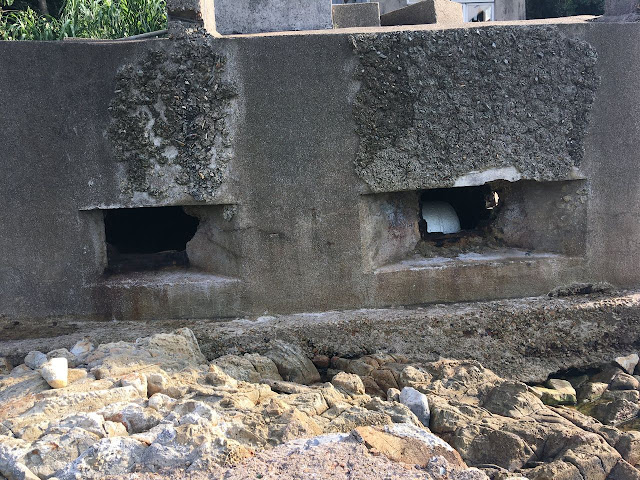 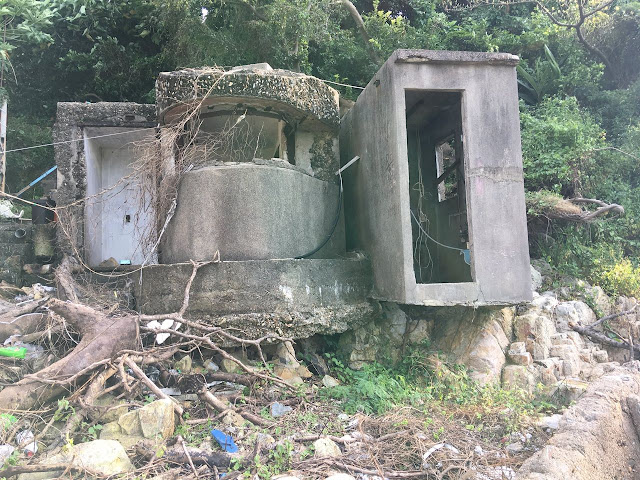 LL 31 Lyon Light structure (the concrete structure on right is a post-war add-on.) 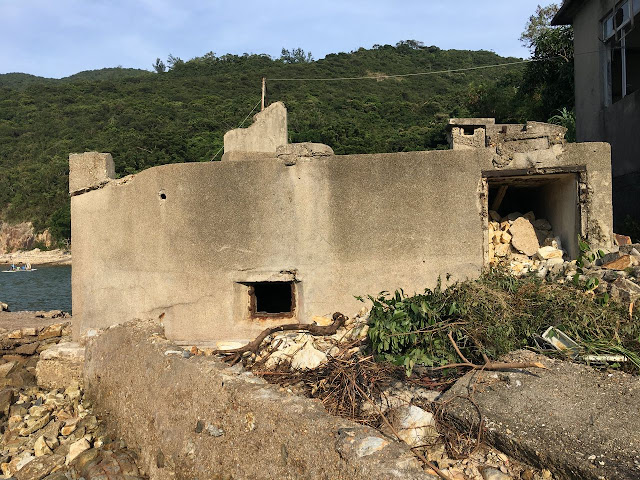 Side view of PB 31 (showing the blocked up doorway).
The original key for this PB was found by Tim Rankin at Stanley. The PB with all its stores would have been locked when not in use. When the were evacuated on 19 December the PB would have been locked by Cpl Devonshire the PB commander.  The fob is labelled with the PB number and the grid reference for the PB. 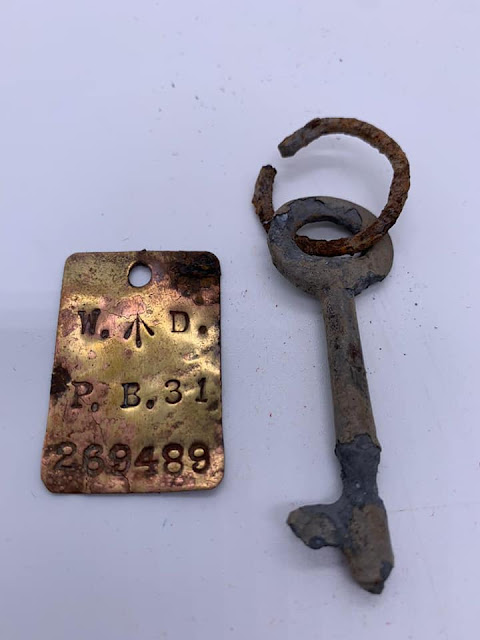 The PB key found after all these years (Courtesy Tim Rankin)

This PB is located at Tung Ah Pui Village. It is a 2-loophole PB. It has a concrete MG post nearby. The most unusual feature is the two towers which house the Lyon Light structure. This PB was under the command of Sgt Thomas Harvey. He was killed in action at or around Maryknoll Mission House. 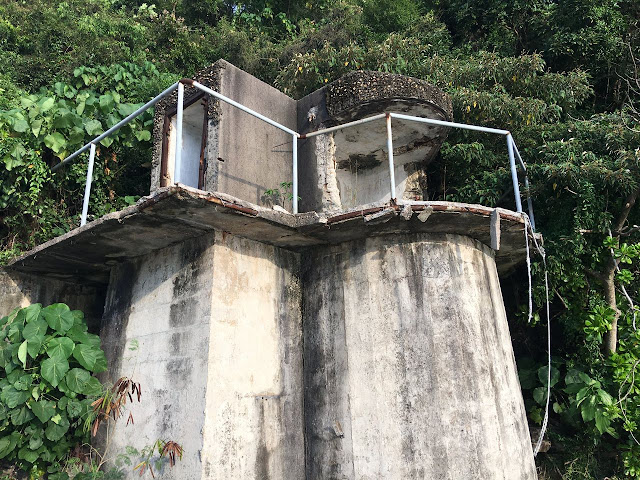 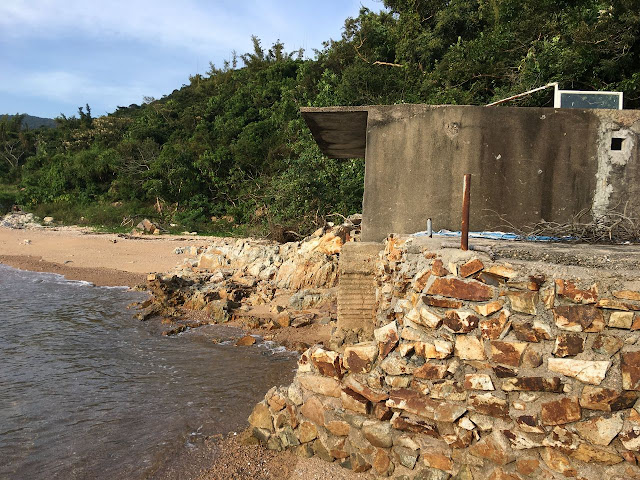 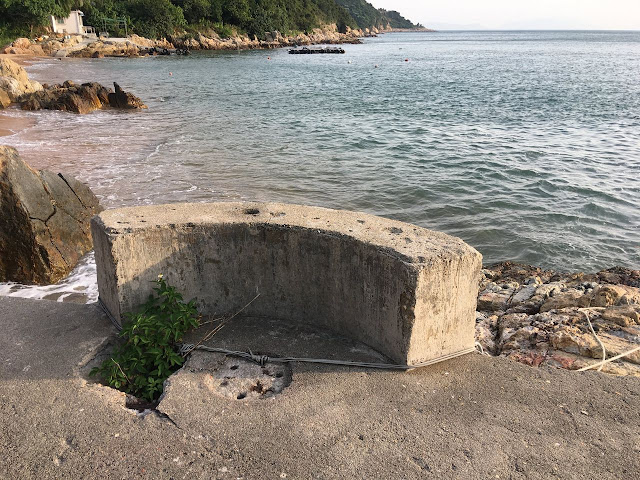 This is a 2-loophole PB located at To Tei Wan village - also known as 'Hobie Cat Beac'.  The PB was commanded by Cpl. Charles Goddard, 1/Mx. He survived the battle. 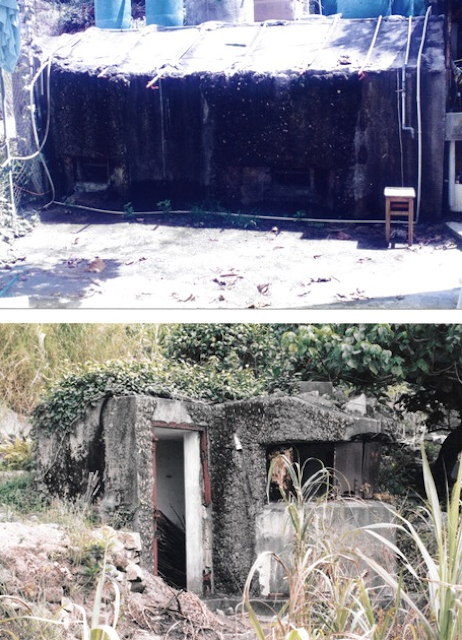 This PB is unusual because it has the Lyon Light (LL) structure on the roof. It is located near the village of Hok Tsui Yuen. The PB is very weathered and stands on an exposed rocky outcrop. To reach it there is a steep descent on a path from Cape D'Aguilar Road. The commander of PB 33 (A) was Sgt Thomas Baker 1/Mx.  He was killed in action on 25 December 1941. PB 33 (A), 34, 35 & 36 were initially under the command of 2/Lt Thomas Harris, D Coy, 1/Mx.  Harris was moved to Z Coy on 17 Dec and replaced by Lt James Witham. Harris was killed in action at Causeway  19 December 1941. Witham was killed on Lisbon Maru in October 1942. 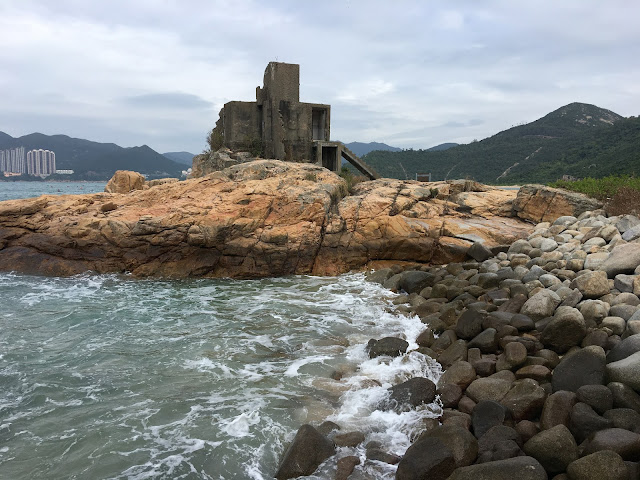 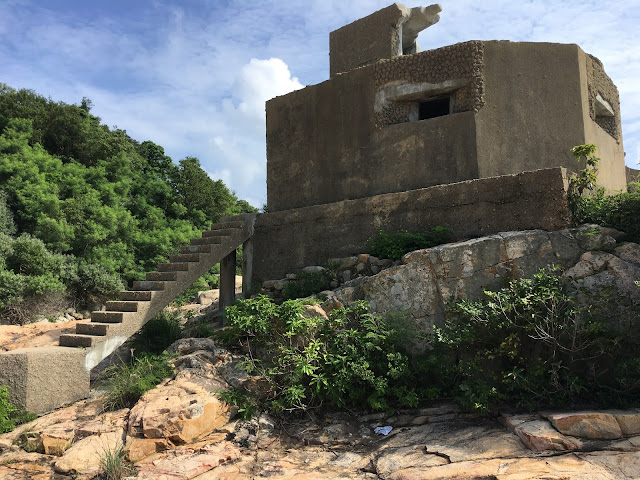 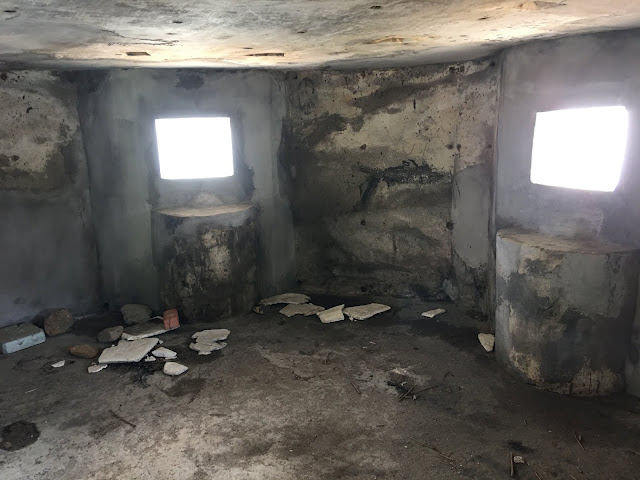 Interior of PB 33 (A) showing two of three loopholes 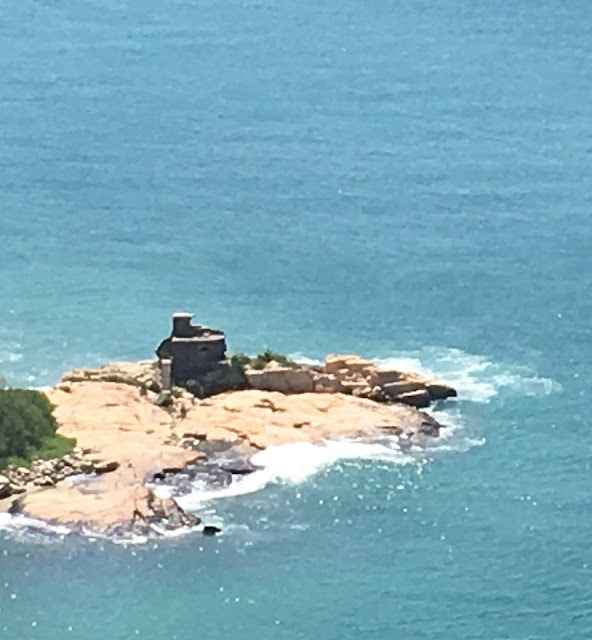 It was interesting to read that the stores in each PB included mosquito nets, mosquito veils and mosquito gloves. They were supplied with hurricane lamps. They had anti-gas ointment, detector spray and a rattle (for gas alarm). Each soldier was issued with a gas mask.  They had petrol cans for the Lyon Light and paraffin for the lamps. They had 7,000 rounds of .303 ammunition. Twelve grenades and a Verey pistol. Their stores included binoculars, prismatic compass, hand torches, 50 sandbags. There was one 'canvas bed bottom' for each bed frame. The bed/bunk frames were retractable and fixed to the wall as in the photo below. 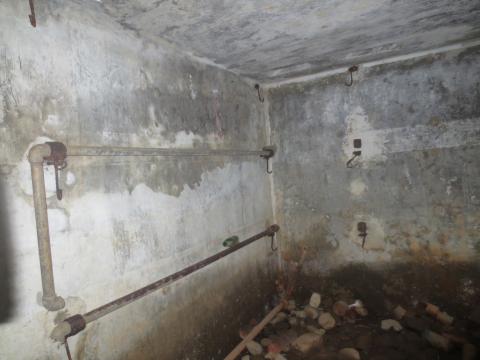 Each PB was issued with 2-days of reserve-rations, salt-water soap (Beach Defence Units only) and the 1/20,000 standard military map of HK. One brown single blanket per man. Each PB had one telephone. Other equipment included hammers, spades, axes, buckets, brooms and wire cutters. There were a lot of stores maintained in the PBs and accordingly when not in use (ie in peace-time) the steel entrance door was locked.

The garrison of each BDU was generally one NCO in charge (Sgt or Cpl) and 5 to 6 ORs plus 2 ORs in the Lyon Light structure.  There was one Vickers Gun per loophole. There were 2 to four loopholes on each PB. At night two sentries were required to be on duty, one of whom was inside the PB and one outside the PB.  White Verey lights were used to illuminate and red Verey lights were used to signal a sighting of hostile craft. The telephone will be used by the PB commander to order artillery barrage. 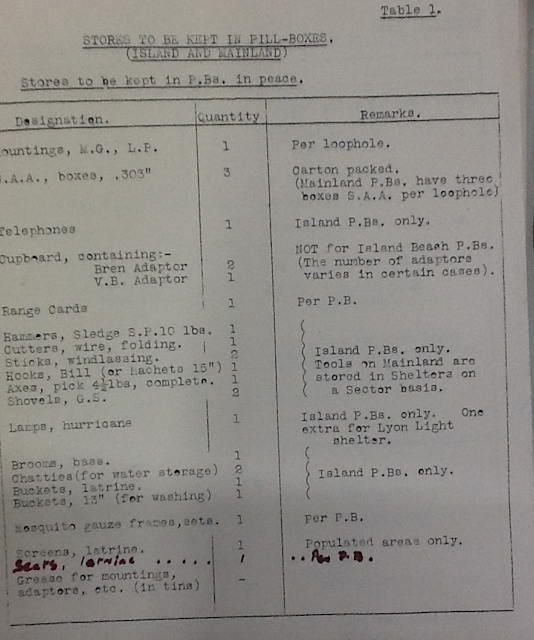 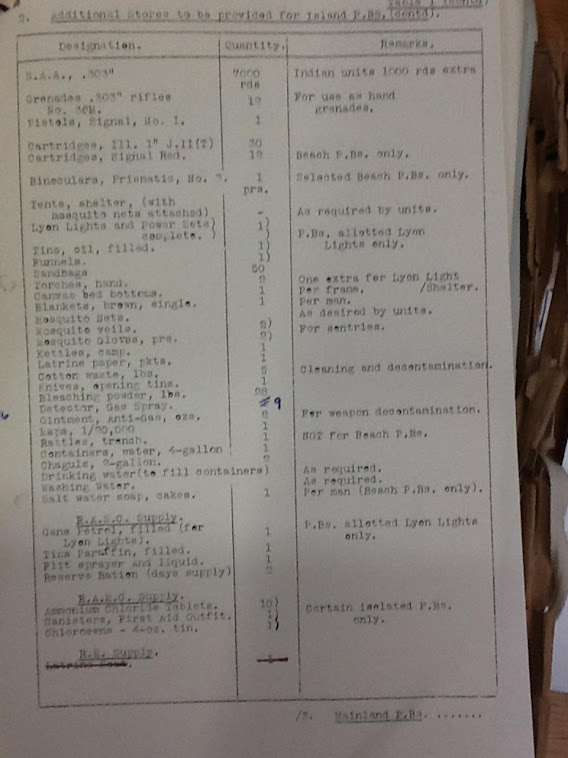 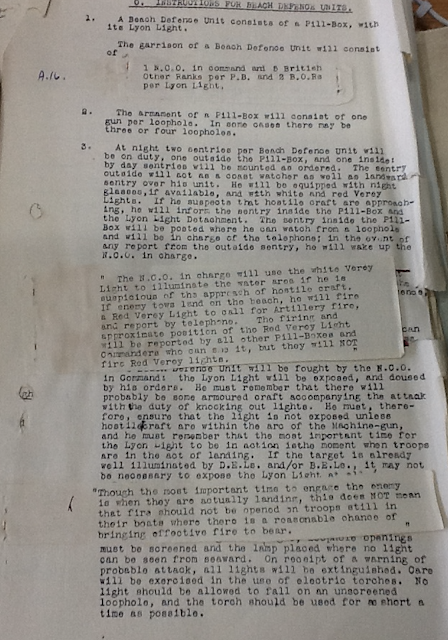 Posted by Philip Cracknell at 05:16