Caronia, No. 17 Bowen Road - the history of a house

A friend of mine recently moved into a charming colonial house named 'Caronia' at No. 17 Bowen Road.  Although I have often walked or jogged along Bowen Road I never knew this house existed. It is hidden in the trees and the only access is by steps leading up from Bowen Road.  Bowen Road runs for 4 km from Magazine Gap Road to the junction of Stubbs Road and Tai Hang Road. No. 17 is the last house on the vehicular stretch of Bowen Road after which access is for pedestrians only. The road is named after Sir George Bowen, Governor of Hong Kong from 1883 to 1885. The aqueduct section consisting of 21 granite arches was built between 1885 and 1887. The house is thought to be named after the Cunard liner RMS Caronia launched in 1904 on Clydeside. The ship sailed mostly across the Atlantic and there is little evidence of the ship voyaging to the Far East. Perhaps the owner had a romantic relationship on the ship which was presumably named after the charming Sicilian hill-top town bearing the same name. The ship was scrapped in 1932. The house built in 1923. The three neighbouring houses at No. 16, No. 15 and No. 14 were completed between 1920 and 1923. An old house like this must have an interesting history. My friend asked me if I could look into the history of the house and find out something about the people who lived there. These four colonial houses, with their neat lawns and white balustrades, were clearly visible from anywhere in Hong Kong or Kowloon. The photograph below shows them in 1949. 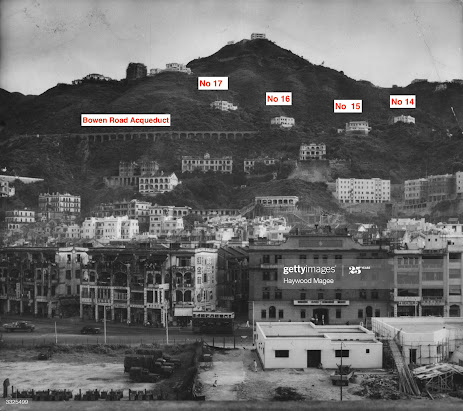 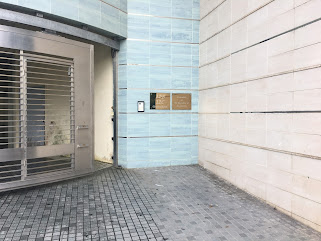 Formerly No. 14 (now 12b and c) housing the Seychelles Consulate 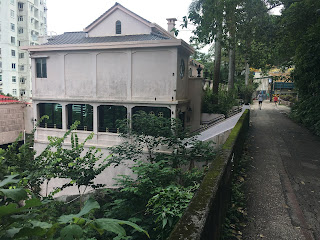 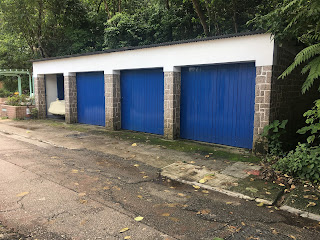 The garage block - perhaps originally one for each house 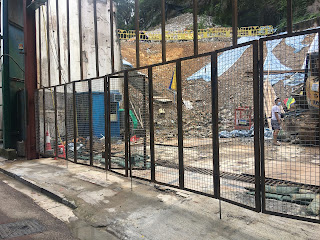 What is left of No. 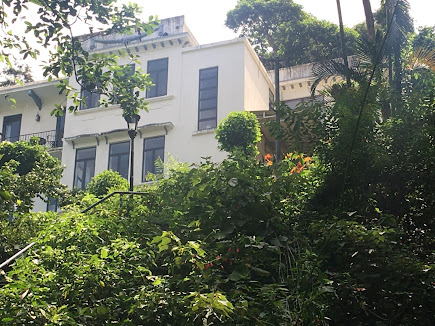 My first view of the house, No. 17,  through the trees 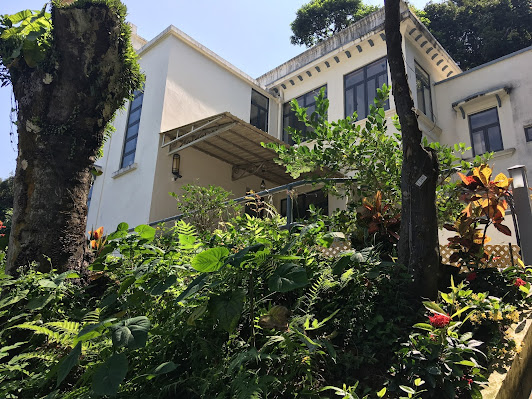 Set amongst the trees and splendid gardens 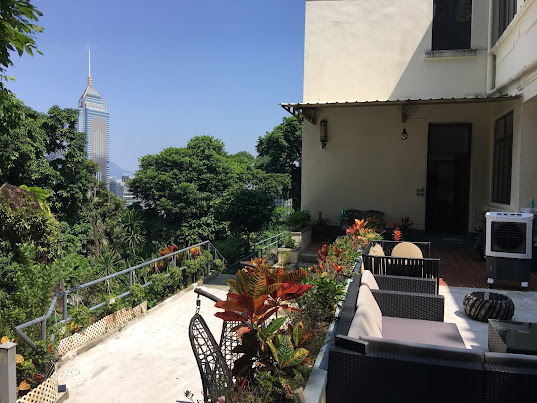 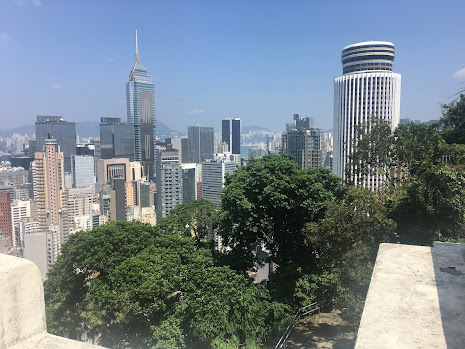 View from the roof

History enthusiast, Alex Macdonald, did a search at the land registry and found that No 17 was completed in 1923. Its first registered owner was Captain Frank Leader Brown born 5 October 1888 and passed away 8 August 1968 in Sussex.  He served in the Royal Engineers since 1907/1908 when he is listed as a 2/Lt. When WW1 broke out in 1914 he had attained the rank of Captain. Records indicate that he served in Hong Kong before the war as he gives an address in 1913 as RE Mess in Hong Kong. Forces war records indicate that he saw service in Italy during the war. Locations included Monte Cassino, Anzio, Salerno and San Marino. This may be the reason he named the house Caronia.

After the war, possibly in 1922, he appears to have left the Army and come back to Hong Kong. He appears on Juror's Lists in 1923, when the house was completed and is listed as a Civil Engineer working for Hongkong Electric (HKE). His address is given as No. 17 Bowen Road. This continues from 1923 until 1941 indicating that he lived at No. 17 for those eighteen years until the war started in December 1941.

In June 1928, he is listed on the manifest of Empress of Australia returning to the  UK with his widowed mother Mary Gertrude Brown of Littlecourt, Goring-upon-Thames. He was thirty-nine and his mother was sixty-two. They travelled from Hong Kong via Manila and Vancouver and then across the continent to board the Empress at Quebec. Travelling with them was Muriel Winifred Holmes (nee Bateman) the wife of Harold Kennard Holmes, whose address, strangely enough,  is given as No. 17 Bowen Road.  Did they all live together or did Harold Holmes house-sit for them? Harold and Muriel Holmes had married in 1905 at St John's Cathedral. She had previously been a teacher at Belilos School.

Had Harold and Muriel's marriage broken down?  Was there a romantic relationship between Muriel Holmes and Frank Brown? There certainly was later, as Frank and Muriel married. I have not found a date for the marriage but it was probably in the mid-1930s. Howard Holmes later married Ellen Florence Holmes in 1938 in Essex. He died four years later in 1942 in Essex.

Muriel was six years older than Frank Brown.  They were interned at Stanley Camp in January 1942. They were billeted in A4/15 which was in the Prison Officers Club Building. They retired to Worthing where Muriel died in 1967 and where Frank died the following year.

The next owner of No. 17 came as a bit of a surprise. I recognised the name immediately. It was Elizabeth ('Emma') Appleton Fidoe. She was one of the five European volunteer military nurses who were raped by Japanese troops at St Stephen's College Hospital on 25 December 1941. She is listed as an owner of No. 17 from 1948 until 1951 when the London Missionary Society acquired the house possibly under the terms of her will.

Emma Fidoe (nee Dudley) was of Irish extraction born in Kilkenny in 1898. Her family moved to Aldershot, England. Her father was working with the British Army (possibly in a civilian role). She became a nurse, and at one stage was working as Matron at the London Jewish Hospital. She married SQMS (Staff Quarter Master Sergeant) Joseph Henry Fidoe, RAOC in December 1935. The marriage is referenced in the China Mail 31 December 1935. I had assumed she was a Roman Catholic but the wedding took place at St John's Cathedral. The newspaper reports that Emma had just arrived in Hong Kong on the troopship HMT . The ship was sunk by a mine in 1945. 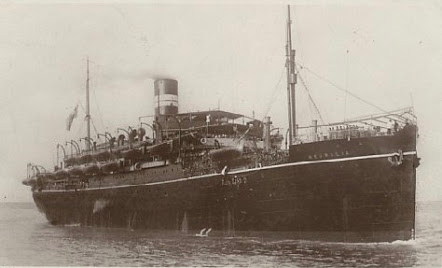 Joseph Fidoe was born in 1891. He had served abroad since 1931 in Egypt, China and Hong Kong. He had been married twice before. His first wife, Nelly Proudman, had predeceased him. They married in 1912 and had a daughter Molly. Nelly died in 1925 and in the same year, Joseph Fidoe married May Dudley in London. She was Emma's sister. She died in China in 1934. The following year he married his thirty-seven-year-old sister-in-law, Emma. The wedding is a big event with a well-attended reception at the Gloucester Hotel. A few years later, Joseph Fidoe left the Army and in 1938 appears on the Jurors List as an employee of Tai Koo Dockyard. However, after this, he seems to disappear into the ether.  He was not in Hong Kong in December 1941. So what happened to him - did he predecease Emma? Did they separate and divorce? I can not find any record of his death. We know that Emma was working as a military nurse serving with the Nursing Detachment of the HKVDC in December 1941 and that she was raped and abused by Japanese soldiers on Christmas Day after they took over St Stephen's Collge Temporary Hospital. We know that she was not interned at Stanley Camp. She must have avoided internment on the grounds of Irish (neutral) nationality. How did she survive in Japanese occupied Hong Kong? What was the source of her funds? Did she continue to practice as a private nurse? All we know is that in October 1945 she was repatriated on the hospital ship HMHS Oxfordshire.  She was demobbed from the Nursing Detachment in London in May 1946 and then returned to Hong Kong to resume her career as a private nurse. It is surprising that she chose to return to Hong Kong given all that she went through.

In 1948, she appears as the new owner of No. 17 presumably assigned to her by Frank Leader Brown but how does a nurse afford a house like this and why did she need such a large house.  There are still a lot of unanswered questions. 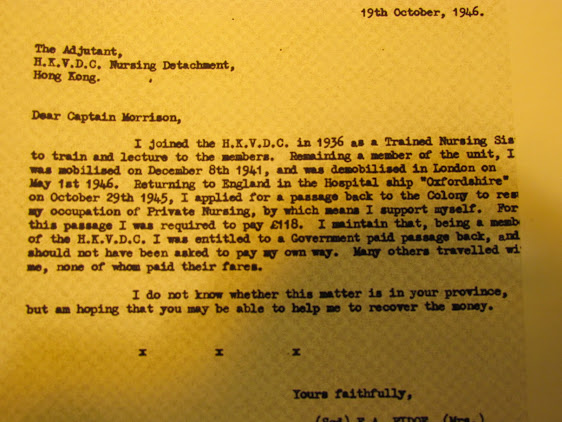 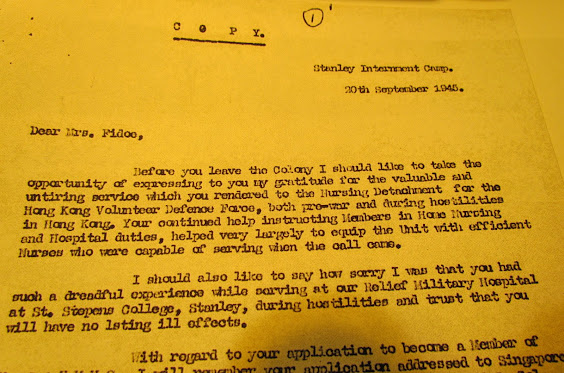 Emma lived at No. 17  until her premature death, aged only 52, at Queen Mary Hospital. 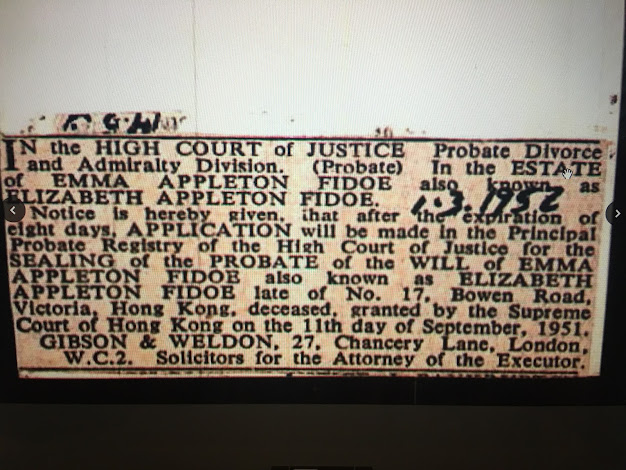 The next owner of Caronia, No. 17 Bowen Road,  was the London Missionary Society (LMS) - it may have been bequeathed to them by Emma. The LMS retained it until 1954.

Houses have a history, they have tales to tell about the people that lived in them, the lives they led, the things they witnessed, their happiness and sadness. It's wonderful that this house still remains to whisper evocatively of days gone by and how things used to be.

No. 16 is now demolished. A new structure will go up in its place no doubt lacking any sort of charm that these old houses once exuded. We have not yet been able to find the previous registered owners. I did notice that in 2012 it was sold by Tony Chan, the feng shui master, closely linked to Nina Wang, for the princely sum of HKD380mm.

No. 15 is still the original house although no doubt after much renovation. The house was constructed in 1920. The first owner is listed as Thomas William Shearstone. He may have been the developer. The house was acquired in 1923 by brothers William and Anthony Carroll along with No 14. In 1925, the property was acquired by Peak Tramways who owned the property until after the war. No. 17 and No. 15 are the only original properties.

No. 14 has been demolished and now seems to be 12 b and 12 c. The less than charming building incorporates the Seychelles Consulate. As with No 15  it was first owned by TW Shearstone who I suspect was the developer. The house was assigned to the Carroll Brothers in 1923. It was assigned to HK Telephone Co in 1947. In December 1941. Henry and Sarah Refo and their four children were renting No 14 from the Carrol Brothers. The Carroll brothers were considered as traitors by the British and had been interned together with Japanese and Italian civilians.

Posted by Philip Cracknell at 04:12