John Talbot Wentworth Reeve, known as 'Jack', was born in Grantham, Lincolnshire in April 1891. He had two siblings, a sister, Helen Laura Wentworth Reeve (1892-1939), and a brother Charles D'Arcy Wentworth Reeve (1894-1916). Jack Reeve was educated at Eton College and attended the Royal Military College at Sandhurst, before joining the Rifle Brigade as a subaltern in 1910.
His name had somehow escaped me as my research is mostly focused on the garrison that was present when the war began in December 1941, and Brigadier Jack Reeve left Hong Kong in November 1941 just before the outbreak of war in the Pacific. I first noticed his name when I came across the photograph, shown below, which I found amongst the private papers of Major-General C. M. Maltby held at the Imperial War Museum (IWM) in London. Only three officers were identified in the notes. I am not sure of the identity of any of the other officers and civilians in the group. The photograph was clearly taken at Happy Valley. In the background, one can see the Jockey Club stands, and further to the left the entrance porch to the Parsee Cemetery. The identified officers were Group Captain Thomas Horry, sitting third from right. He was the Commanding Officer of the RAF Station in Hong Kong. He was forty-three-years-old, and like many of the senior officers, he was a veteran of WW1. More than that, he was a decorated war hero. He had served in the Royal Flying Corps and was accredited with eight 'kills' in the closing stages of WW1. He had been awarded the Distinguished Flying Cross (DFC) in 1919, the citation for which is shown below.

An officer of exceptional courage and daring. In the face of driving rain and low clouds, he led his patrol into enemy territory in order to engage enemy troops and transport that were retiring. Reaching his objective he attacked the enemy with vigour, causing heavy casualties. He has in all destroyed three enemy aircraft and driven down another, out of control, and has, in addition, taken a leading part in the destruction of six others.

Group Captain Horry left Hong Kong to take up a new assignment with RAF Singapore on the ill-fated SS Ulysses which sailed from  Hong Kong on 7 December 1941. The war began the next day. Sitting next to Wing Commander Horry was fifty-year-old Brigadier Jack Reeve. He was the Commanding Officer of the infantry in Hong Kong. At that time the infantry consisted of four battalions. The 2nd Bn Royal Scots, the 1st Bn Middlesex, the 2nd Bn 14th Punjab Regiment and the 5th Bn 7th Rajput Regiment. Sitting next to Jack Reeve, in whites, was forty-eight-year-old Commodore Alfred Creighton Collinson the Senior Naval Officer in Hong Kong. He had joined the Royal Navy in 1914 and had served throughout WW1.

Jack Reeve was a regular officer, educated at Eton, he had graduated from the Royal Military Academy at Sandhurst and joined the Rifle Brigade four years before WW1 began. He had been awarded the Distinguished Service Order (DSO) and had twice been mentioned in dispatches (MiD).  His brother Charles D'Arcy Wentworth Reeve was killed in 1916,  whilst serving with the Royal Flying Corps, in an air crash at Hounslow Heath. After the war, in 1919, he married Sybil Alice Agnew, the daughter of a baronet. They had one child, a daughter, Joanna. 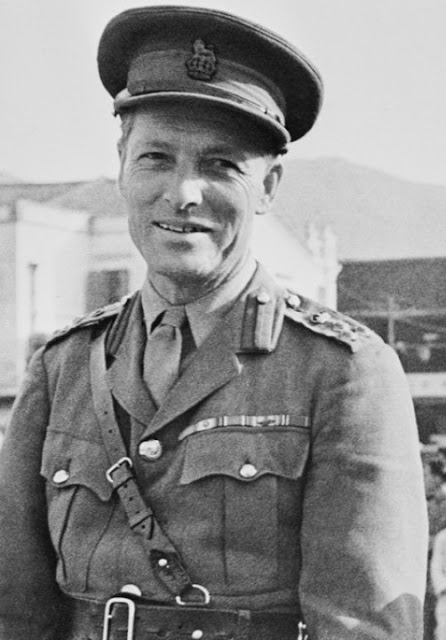 Fast forward through his army career in the twenties and thirties, and in 1938 Brigadier Reeve was appointed to command the infantry brigade in Hong Kong. In November 1941, the infantry was reinforced by two Canadian battalions, the Winnipeg Grenadiers and the Royal Rifles of Canada. The Canadians arrived on 16 November 1941, and the reinforcement was a great morale boost to the garrison, as described by Major-General Maltby in his notes below. 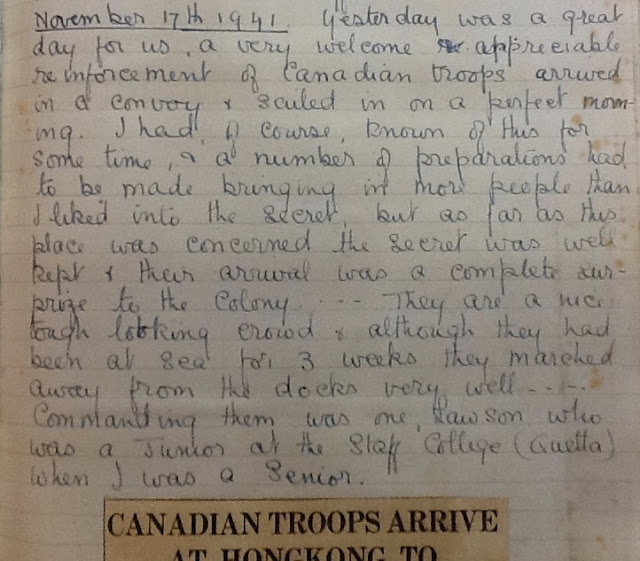 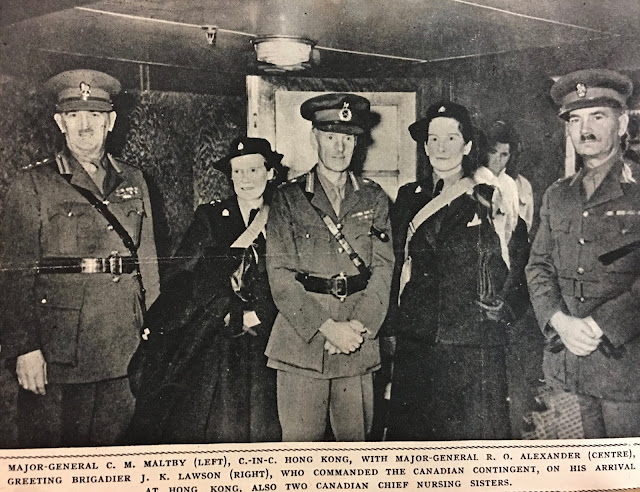 As a result of the reinforcement, the infantry was split into two brigades. The Mainland (Kowloon) Brigade under Brigadier Cedric Wallis and the Island Brigade under Brigadier John Lawson, who was killed six weeks later, during the Battle for Hong Kong. Following the arrival of the Canadian troops and the reorganisation of the infantry, Brigadier Reeve returned to the UK in November 1941 with his wife Sybil and their eighteen-year-old daughter Joanna. Passenger manifests show them arriving in Liverpool on the SS Denbighshire on 21 January 1942.  Jack Reeve took up various senior staff jobs in the UK with Home Command and was promoted to Major-General. During his career, he was appointed Commander, of the Order of the British Empire ( CBE) and a Companion of the Order of the Bath (CB).
The photograph with which we began this story captures that moment in time on 30 October 1941. The gathering of senior officers was on the occasion of a parade by the Hong Kong Singapore Royal Artillery (HKSRA) to mark their centenary. The regiment had first been embodied in Hong Kong in 1841 and was then known as the China Gun Lascars. There was a parade and a march-past with the new Governor Sir Mark Young taking the salute. 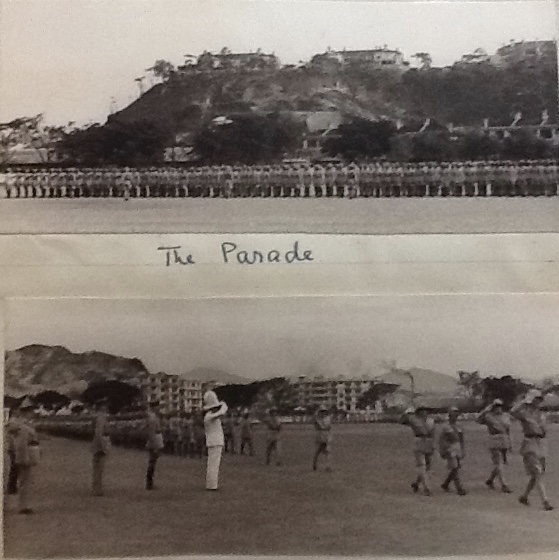 The photograph shows the parade and the march-past with Sir Mark in whites taking the salute. He commented in his notes that their pipe band played too fast and as a result, the march-past was a bit grim. In the upper photograph showing the parade, we can see in the background Leighton Hill. The buildings on top of it are government quarters for the families of senior civil servants. Only six or seven weeks later Leighton Hill would become a hard-fought battleground. 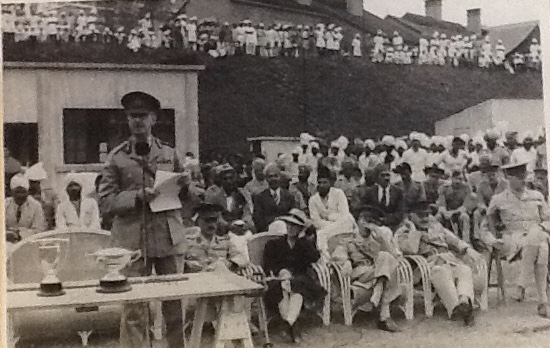 Jack Reeve retired shortly after the war ended. His wife, Sybil, died in 1949 after thirty years of marriage. Jack Reeve married, secondly in 1950, to Marjorie (Peggy) Frances Fry. She had been married and widowed twice before. Major-General Reeve passed away in June 1983 at the age of ninety-two. He was survived by his wife Peggy who was quite an extraordinary women in her own right. She was born in 1899 and served as a WRN officer in WW1. In 1919 she married Jeffrey Kerr Laughton, a naval officer. He, however, died following complications from a mosquito bite in 1925. They had one child, a son, John Knox Laughton (1921-1982) who served in the Royal Navy during WW2. He survived after having been torpedoed three times. Peggy married again in 1927 to Major-General Cyril Wagstaff. He too succumbed to an insect. He was killed by a wasp-sting at the Military Academy at Woolwich. What are the chances of that! 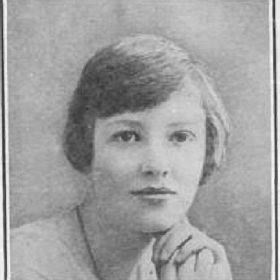 In WW2, she joined the Army and served with the BEF in Flanders and was evacuated from Dunkirk. She was then posted to General HQ in Cairo where she commanded the Auxiliary Territorial Service (ATS). She was appointed CBE in 1944. It was at this time that she first came to interact with Brigadier Jack Wentworth Reeve. She attained the rank of Brigadier. After the war, she served as a JP and was involved with the Red Cross. Jack called her after his wife died and romance blossomed. She passed away in 1998. These were extraordinary people, living in extraordinary times and doing extraordinary things.

Posted by Philip Cracknell at 22:22