This is a beautiful and somewhat imposing building with its tower and castle-like windows. It sits on a knoll just above the hustle and bustle of Central business area of Hong Kong. It was built around 1848,  to be used to accommodate the Head of the Anglican Church and to house an Anglo-Chinese school known as St Paul's College, a school that still survives although after WW2 the school relocated to its present site in Bonham Road next to the University of Hong Kong.

On the 19th of July 2013, I was lucky enough to see inside the building as a guest of historian and author Geoff Emerson and the Rev. Philip Wickeri, Advisor to the Archbishop on theological and historical studies. With us was Emily Mosely visiting Hong Kong who had a special interest as she is the great grand-daughter of Arthur D Stewart who lived in this building as Headmaster of St Paul's College from 1909 to 1930.

St Paul's College is one of the oldest schools in Hong Kong. The founder being Rev. Vincent John Stanton who was appointed as the first Colonial Chaplain of Hong Kong in 1843 only a few years after the 1st Opium War.

The house was used to accommodate the school as well as the Anglican Bishop of Hong Kong. The house was being renovated at the time we visited, but you can see in the photographs below, the wide rooms and high ceilings. It was a nostalgic visit for Geoff Emerson who started teaching at St Paul's in 1964  and was given accommodation in Bishops House.  The Rev. Philip Wickeri kindly showed us around this fascinating piece of Hong Kong's history.

You may be wondering what the connection is with WW2 in Hong Kong and Bishops House.  Well, I will start with Francis Braun a Hungarian printer who worked for Ye Old Printerie owned by the Labrum bothers who had joined the HKVDC and were incarcerated in Shamshuipo POW Camp after the British capitulation.

Francis Braun was arrested by Police on the outbreak of the Pacific War and taken to Stanley Prison to be interned as an enemy alien. Hungary had just declared war on Great Britain.  Prisoners were released to make way for enemy aliens and he found himself interned with Germans, Italians and Japanese. They were bombed and shelled until the surrender on 25th of December. They were released by the Japanese on 28th December and taken to Repulse Bay Hotel for tea and biscuits and then driven up Repulse Bay Road and through Wong Nei Chung Gap to Central.

Braun joined with other release internees and found a hotel on the Wanchai waterfront called the Luk Kwok Hotel. A hotel built in the 1930s and although rebuilt still exists. The hotel's website shows the old building: 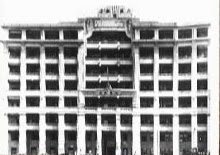 "Having settled in my newest abode, I went to see some friends in the Bishop's House in Lower Albert Road, in a lovely wooded area just above the Central District. .........The Reverend Alistaire Rose, The Dean of St John's Cathedral, said that I might, if I wished, move into Bishop's House. I moved in on the fourth of January." (1)

The Rev Rose was shortly after this interned by the Japanese together with British, Dutch and American civilians. They were first held in cheap hotels and brothels on the Western end of town and then transferred to Stanley Internment Camp on or around 21st January 1942.

"There were a great many nationalities in the Bishop's House, almost all of them swept together by the storm of the war: Danes, Norwegians, Russians, Chinese, Austrians, Germans and a Hungarian. There was an old American from the Tao Fong Shan Mission, an American female pianist, and even a member of the Red Cross who was later interned because of his British nationality.

The Bishop's House was managed by a Mrs I Klein, her husband a medical doctor who died during the war, and a Dr Hart, an Austrian, connected with the Church." (1)

The British and Americans left for internment on 5th January 1942. Francis Braun writes "a few days after the exodus of our friends four Japanese officers and their batmen were billeted with us. They did not mix with us nor did they interfere with the management of the house".  (1)  Braun continued to live in Bishops House until 1943 when he moved to Kowloon to share an apartment with an elderly German couple.

Arthur D Stewart was Headmaster of St Paul's College from 1909 until his brother Evan Stewart took over in 1930. This framed photograph of A D Stewart is on one of the walls of Bishop's House

Arthur Stewart's sister Kathleen founded St Paul's Girls School. His brother Evan George Stewart was a member of the Hong Kong Volunteer Defence Corp and was Commanding Officer of No 3 Machine Gun Company who were in the thick of the action at Jardines Lookout. 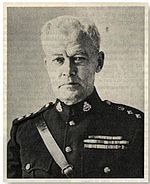 Arthur and Evan Stewart's parents were Church Missionary Society (CMS) missionaries in China. They (Robert Warren Stewart and Louisa) were both murdered in China in 1895, together with two of the infant children. They were killed by a group who were opposed to foreign missionaries.  Herbert Stewart aged 6 and Hilda aged only 1 were also killed. Evan (aged 3) and his sister Mildred (aged 13) were rescued from their burning home by their plucky sister Kathleen L Stewart who at that time was aged 11. The older children, Arthur, Philip and James were away at school in England at the time.  The plaque below in St Paul's Church adjacent to Bishops House commemorates their tragic death.
The plucky sister who rescued her siblings went on to marry Rev. Ernest William Lunn Martin who was Warden and Chaplain of St Stephen's College Stanley.
In John Stericker's book about his experiences in Stanley Internment Camp - "A tear for the dragon", he recounts how "Mr and Mrs Martin were arrested on Christmas morning. They were tied up and placed in a small room where they were molested throughout the day, being continually struck with the butts of rifles on the head, face and legs, and rendered almost unconscious. At nightfall, they were thrust into another small room in which there were four British soldiers and eight Indians. They were tightly bound and left for 36 hours without food and water and were then released". (2)
During the fighting, Marjorie Grindley describes how the bodies were piling up at Tweed Bay Hospital and she recalls Rev. Martin digging graves and burying them. (3)
Gerard Heath Lander one time Bishop of Hong Kong and Headmaster of St Paul's College from 1907 to 1920, married firstly to Amy Fletcher (1858-1902) it was the two daughters of this union that married Arthur and Evan Stewart. After Amy died Gerrard Lander married in 1904 to Margaret L Smith (1879-1977). Their union produced three children; one of whom John Gerrard Lander (1907-1941) went on to become an Olympic oarsman. He was working for Asia Petroleum Corporation in HK whilst his wife and child were in the Philippines. John Lander was a member of No 1 Battery HKVDC and was involved in the close-quarter fighting at Stanley and was killed in action in December 1941.  His wife (Betty Lander) and son (Gerry Lander) were interned in Santa Tomas Camp in the Philippines. I had the pleasure to meet Gerry Lander in November 2012  on a visit to the Prison and the grounds of St Stephens College. He recalls being liberated by a flying column of US troops as they blasted their way into the Camp to liberate the internees. Gerry's grandmother Margaret L. Smith also had a strong Hong Kong connection as she was the sister of NL Smith who was formerly Colonial Secretary and Acting Governor. He returned with his daughter Rachel on SS Ulysses which left Hong Kong the day before war broke out, was bombed and straffed by Japanese aircraft and finally sunk by a U-boat off the Carolinas (see my post on SS Ulysses).
...............................................
Sources:  (1) "The Bank Note that never was" by Francis Braun
(2) "A tear for the dragon" by John Stericker
(3)  Taped interview with Marjorie Grindley wife of prison officer and internee at Stanley.
Posted by Philip Cracknell at 05:06