I came across this sketch of Stanley Village in the War Diary of the Middlesex Regiment held at National Archives in UK. It shows a panorama of Stanley and its environs as it was in December 1941. A view seldom seen. 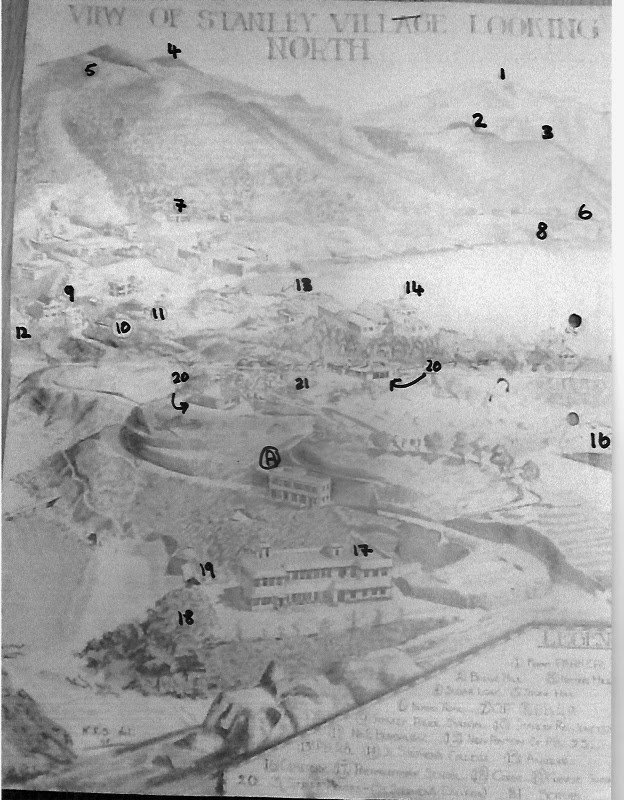 The key at the bottom of the drawing is not very clear so I am repeating it below:


If you look at the drawing the building in the lower foreground marked No. 17 is St Stephen's Preparatory school. It's actually still there although there are a few more buildings around it. I walked down to St Stephens beach last week to see the building and I took the picture below:


In the closing stages of the war a bloody battle was fought here on the Stanley Peninsula. The 1st Battalion of the Middlesex used the Prep School as it's Headquarters for the combined B and D companies. The windows were bristling with machine guns and the enemy advance was checked here by the stubborn defence put up by the men of the Middlesex - a regiment with a long history and who had won the epithet of "the diehards" at the Battle of Albuera in the Peninsular War when the "Middies" fought to a last man.

In the early hours of Christmas Day Japanese troops were heard infiltrating under cover of  darkness along the rocky beach beneath the Prep School  - they were fired on from the machine gun positions in the Prep School and from the pillbox PB 24 which was situated just out of the picture in the bottom left corner with a firing line covering the beach as well as out to sea across Stanley Bay towards Chung Am Kok.

As daylight broke the Japanese had taken cover in the small copse (No 18) just below the school. This has been built over almost entirely and the area is bordered by this stone wall which may have existed in 1941 or at least the lower part of it below the concrete addition on the top. 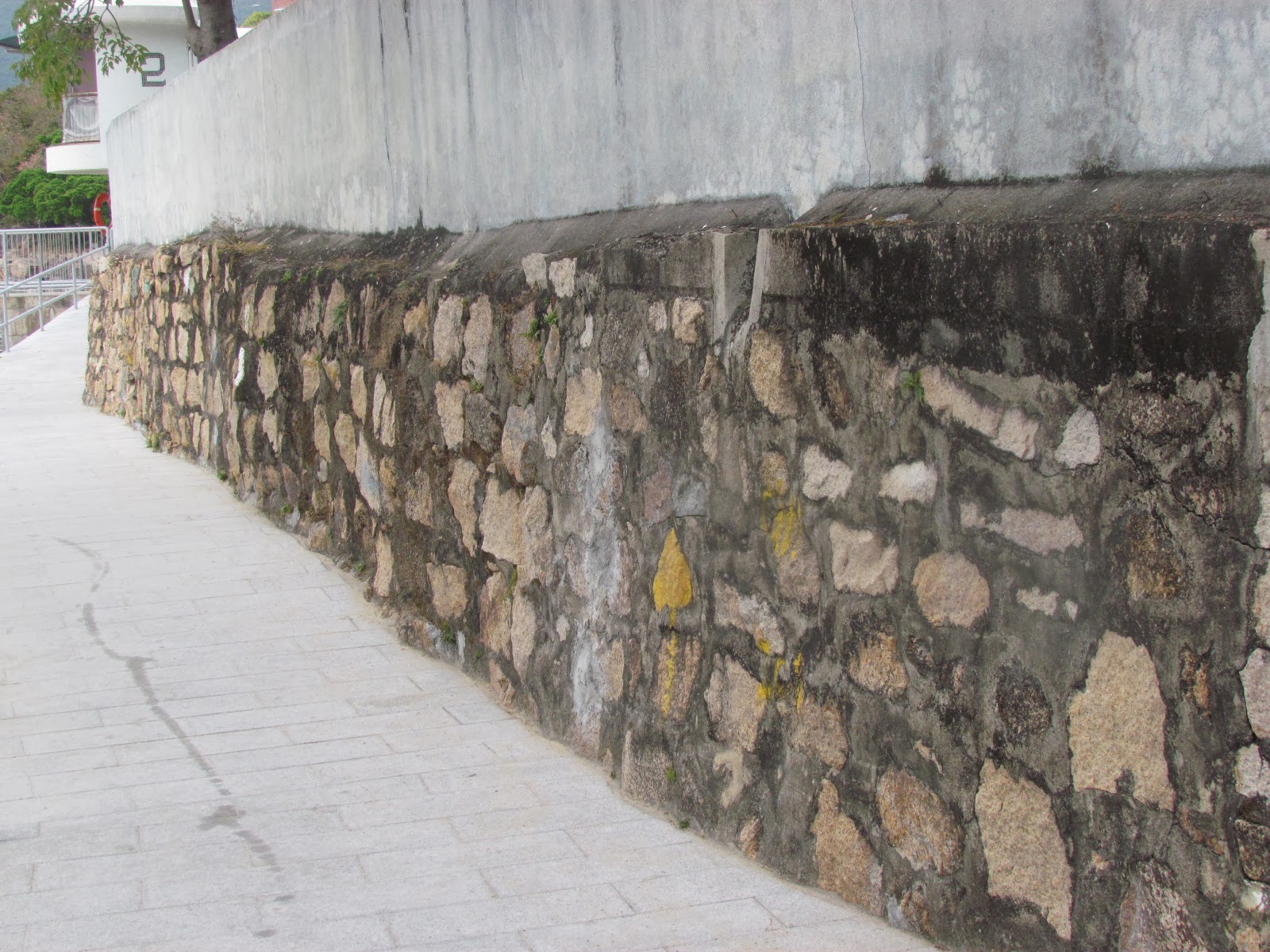 The commander of the two Middlesex (Mx) companies at the Prep School was Captain Weedon. At  first light, he formed a fighting patrol to attack the Japanese and drive them out of the copse. As the British troops entered the copse to flush them out some of the enemy withdrew to a Chinese shrine (No 19) which can be seen in the drawing at the back of the beach. Grenades were thrown through the roof of the shrine causing severe casualties amongst the Japanese. The survivors withdrew to the beach sniping from  the cover of rocks. PB 24 opened fire with her Vickers machine guns and the enemy were annihilated.

Unfortunately there was no sign of the shrine at the back of the beach. The Pill Box (PB24) has gone too, and where it stood is a government sponsored sail training establishment.

On the drawing marked (A) is a building which I think still exists today. I took a photograph of it below but from the landward side: 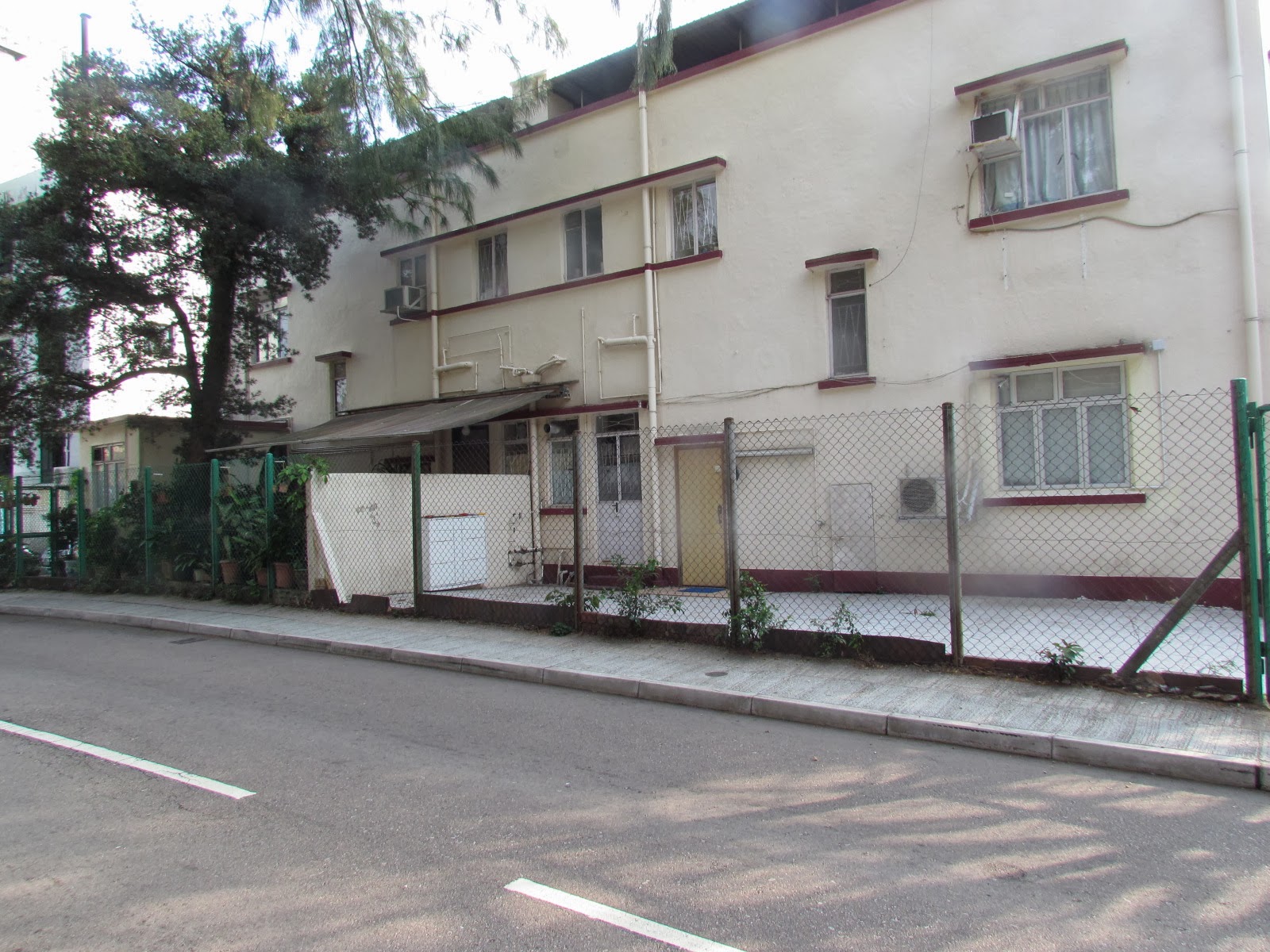 The view from the beach was obscured by trees. It's in the right place and looks remarkably similar to the 1941 building in the drawing.

Nearby is Stanley Military Cemetery  marked No 16 in the drawing. It is situated on high ground above the road. Many of the British military dead are buried here and also civilians who died in nearby Stanley Internment Camp during incarceration.


Not far from the cemetery are some of the bungalows marked as No 20 which were used to house civilian internees during the war. Internees were crowded in to these buildings with up to 50 living cheek by jowl in a bungalow designed for one family. The bungalow nearest the road with an arrow pointing to it is Bungalow C.

It is now the home of the Chaplain of St Stephens College. St Stephens College  marked No 14  is still a popular and successful school today. Bungalow C was the scene of a tragedy during World War 2 when an American fighter bomber accidentally bombed the bungalow causing some 14 deaths amongst the civilian internees. This occurred on 16th of January 1945. A memorial (below) in Stanley Military Cemetery commemorates the dead. 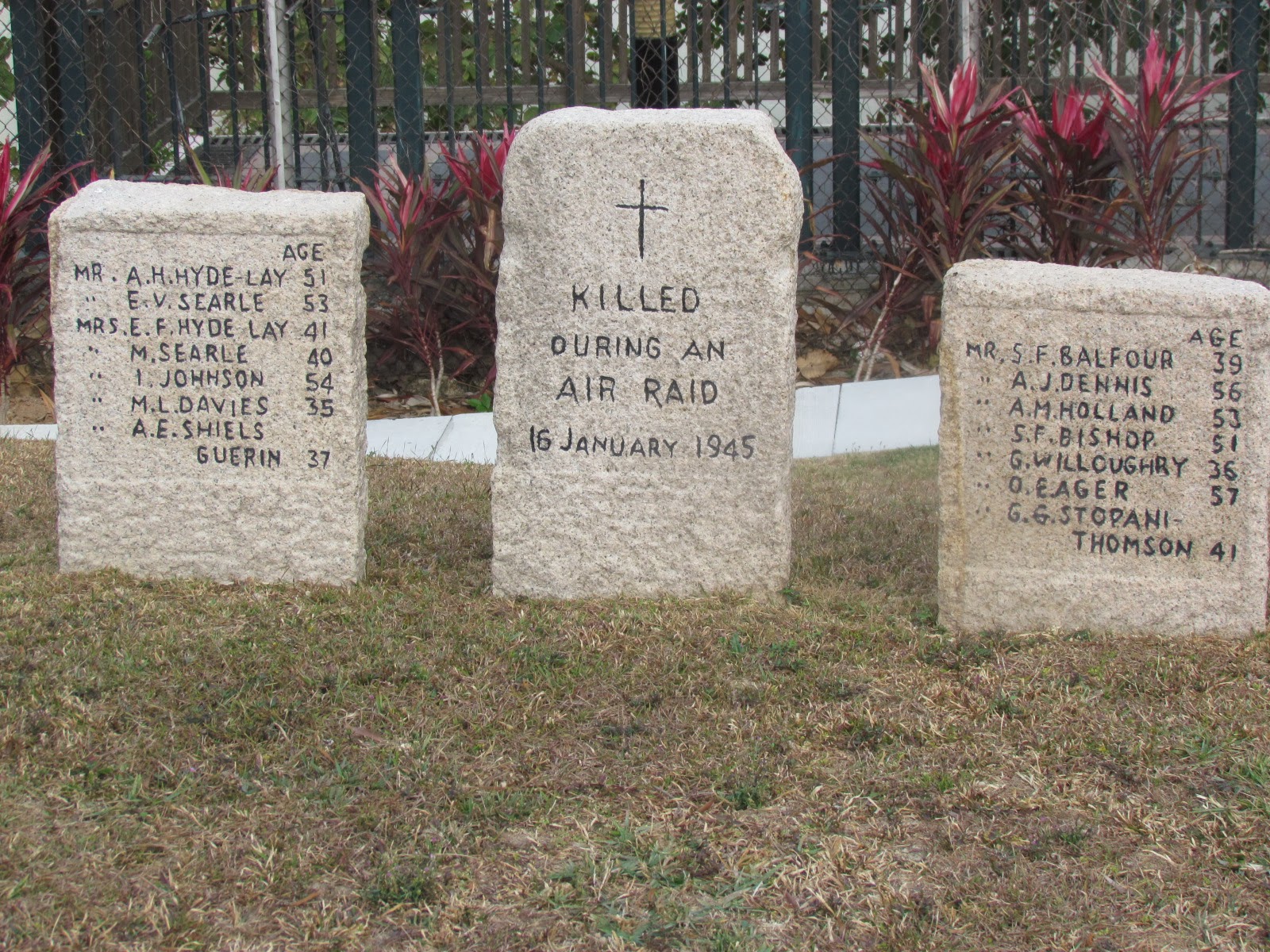 If you look at No 7 on the drawing it shows a private house to the north of Stanley and the key marks it as an OP (Observation Post). TheWar Diary of the 1st Battalion Middlesex tells us that Captain West  Commanding Officer of D Coy together with a section of men established this Forward OP in a private house near the junction of Island Road and Stanley Village Road on the 22nd December. On the 24th December the Japanese were on the slopes of Stone Hill and a flag could be observed from the roof of the house. Capt West and his men finding themselves surrounded hid in one of the rooms whilst the Japanese placed a mortar on the veranda.  A short while later they were discovered by a Japanese officer  - one of the party threw a grenade which killed the officer and wounded the mortar team. In the confusion they flew out the front door and headed back to their lines and safety. 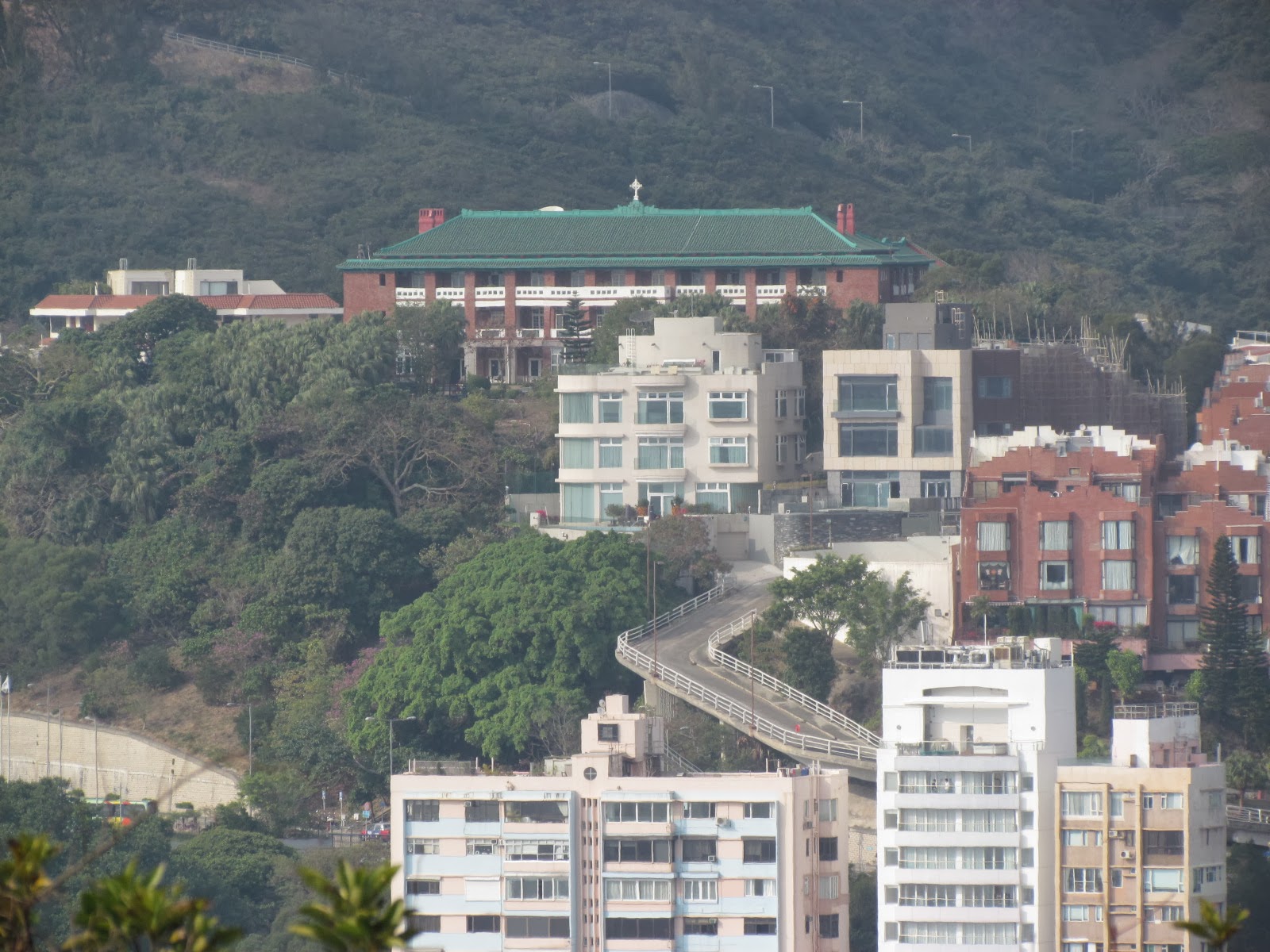 This hill top monastery was guarded by Lt Scantlebury, Lt Newman  and various men from D Coy almost of whom were to put to death. The Middlesex Diary reports them as missing in action but here's an account of what really happened from one of the Maryknoll fathers:

"Squatting together with us, but tightly bound , were a Canadian Captain and three English officers; they behaved nobly, as you would expect from a military officer. In no way would they bow to their Japanese captors even when cruelly beaten. I cannot remember the name of the Canadian . The British were Lt Lawrence , RA , 2nd Lt Newman and 2nd Lt Scantlebury (both Middx). Scantelebury whispered that he had been married for only 10 months. He then asked me to contact his wife in Hatfield, near London and let her know that he was still alive. They expected to be executed. The ropes that bound them were almost choking them".

Later they were all moved down to the alleyway beside the Carmelite monastery. "The four British officers squatting with us were grilled; someone tried to cut off their shoulder straps with a sword or bayonet; an order was given for them to get up and move down to the end of the row where they were brutally bayoneted to death , and this on Christmas morning , right outside the Carmelite Monastery. We were sickened and disgusted; but they bravely faced death. Later I came to know that Brother Cheung and our boys (left at Maryknoll) had been ordered to bury them  and other victims close by. After the war I managed to correspond by letter with the wife of Lt Scatlebury and offer her my condolences . I did not dwell on the details of his death. In 1948 I was able to return to UK and met Mrs Scantlebury in our college at Battersea, London. We went to our college chapel and prayed for him and his companions in death" .