John ('Jack') Seaby - a life of action and adventure

John ('Jack') Seaby was born in London in January 1908 and grew up in Southend-on-Sea. In 1928 at the age of 20 he went out East and joined the Shanghai Police force and when World War 2 broke out in Europe in 1939 he was an Inspector with the Shanghai Police aged 31. He enlisted from Shanghai by joining the Hong Kong Royal Naval Reserve (HKRNVR) as a Warrant Officer in the Mine-watching Branch. He was mobilized on 27th  October 1941 just weeks before the Japanese invaded Hong Kong in the morning of 8th December  1941.


There were a number of other residents of Shanghai including other members of the Police Force who enlisted in the HKRNVR.  The Mine-watching branch were responsible for the minefields around Hong Kong which consisted of both the traditional contact mine and electronic or remote controlled mines.

These minefields and their shore based stations were blown up and deactivated on 19th December 1941 after the Japanese forces had successfully landed on the Island of Hong Kong and built a bridgehead. Officers from the Mine-watching branch, as well as those from the Auxiliary Patrol Vessels and other craft, that had been ordered to be scuttled, were ordered to go ashore and to fight in the hills as infantry.

Jack Seaby was wounded during the fighting and hospitalized at Stanley. He was taken prisoner on 25th December 1941 following the surrender of the garrison by General Maltby, the military commander and Sir Mark Young the Governor of the Colony. The Japanese far out-numbered the defenders who had for the most part fought well against overwhelming odds.

Life in a Japanese POW Camp was brutal. There was insufficient food, and illness associated with malnutrition was rife for example pellagra, loss or impairment of eyesight, and a painful condition known as "electric feet".  Many POWs became sick from diphtheria, dysentery and other illnesses and medicine was not supplied by the Japanese and as a result many died needlessly. It was hard just staying alive.

Jack Seaby was first interned with other Naval personnel at North Point Camp and later at Shamshuipo Camp.  In September 1942  he was shipped to Japan, together with 1,800 British servicemen, they were  crammed into the hold of a rusty old ship called the Lisbon Maru.

"We were piled in three holds under conditions which I should imagine were about the equivalent to conditions pertaining to the slave ships.  At 7 o'clock on the morning of October 1st, as all hands were waiting for the first meal of the day a slight disturbance was heard on deck. The next moment a loud detonation was heard aft and the vessel  shook and shuddered. All the prisoners that were on deck were ordered below". (1)

They had been torpedoed by the US submarine "Grouper", whose commander had no knowledge that this Japanese freighter was carrying British POWs..

"The Japanese then covered all hatches with covers and tarpaulins, and from then on it was a nightmare in the holds. No water, no food, and very little air. Dysentery and diphtheria cases in the hold and no facilities for lavatories. Several men died from asphyxiation  and exhaustion. All lights had been extinguished, the holds were black as ink". (1)

Jack Seaby writes, "when I reached the deck , she was awash and it was fairly evident it was a matter of minutes before she sunk". (1)

Many POWs died in the holds, those that were able to escape the holds jumped overboard and swam for their lives but in their weakened condition many drowned and others were shot by Japanese guards on nearby vessels. It was only later that the Japanese started to pick up survivors. Some managed to swim to some nearby islands.

Jack continues, "no attempt was made to pick up survivors . I swam with a crowd of others towards a vessel but she turned her screws towards us. I attempted to swim towards the islands in the distance, at about 1400 hrs I came within call of this island but the coast was so rocky and craggy I knew it would be suicide to attempt to land. I learned afterwards that many attempted to land and were smashed against the rocks and killed. I thus allowed myself to be carried out to sea again and at about 1800 hrs ,nearing dusk, after I had practically abandoned hope, I  was picked up by a small Chinese junk. I was taken to a small island and lodged in a Chinese temple where I found another twelve survivors under Chief Petty Officer Rawlings. The  majority of these men were in a pitiful state but were being treated kindly by the Chinese.

We were kept in this temple  until the following day  when Japanese Marines landed and took charge of us. We were treated reasonably well. The Marines gave us hot tea from their water bottles and ration biscuits which I believe were their own issue. We were then placed on board a coastal patrol vessel and taken to a wharf in Chapei (Shangahai). We were again handed over to to the Japanese military. Most of us were naked or semi-naked and laid on this wharf in the cold until about 1600 hrs when the Japanese produced light clothing and a meal. Japanese medical authorities  allowed the most severe cases to remain in Shanghai. When I say most severe I mean men that were practically beyond hope. The remainder of us were placed in the hold of a freighter  and sent to Japan". (1)

The conditions in which men were shipped to Japan for slave labour in factories and docks was appalling. The story of the Lisbon Maru is tragic. The story is told by Tony Banham in "The Sinking of the Lisbon Maru" (illustrated below). Over 800 men lost their lives. Jack Seaby was one of the survivors but his brush with death was not over. 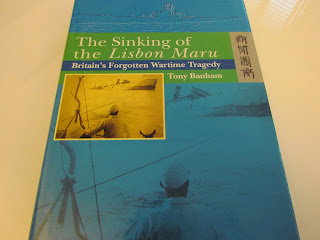 After arriving in Japan in an exhausted state Jack contracted diphtheria. He was moved from POW Camp to a Ichioka Hospital, a makeshift hospital housed in a sports stadium for treating seriously ill POWs.  Jack managed to survive and after two months of hospitalization returned to POW Camp in Osaka.  Here they were put to work stevedoring  in the docks.


"If a prisoner were sick, he was forced out to work until he nearly dropped, then on being admitted to hospital  his rations were cut to a low level". (1)


Physical brutality was common. Seaby reports one particular case as an example.

"In 1943 a medical officer, Miataki, with a rank of Lt. was attached to the POW Camp. He enforced brutality, both mental and physical. If men did not immediately jump up and bow - he would beat them with sword, fist or boots. One particular evening  when Tenko (roll call) was scheduled for 8 pm he arrived at 7:50pm. I immediately shouted Kiotaki (attention) . Unfortunately one man Pte Evans, Royal Scots, had a button of his tunic undone. He began fumbling with the button but this was noticed by Miataki, who immediately unhooked his sword and scabbard and struck Evans who at this time was standing rigidly to attention. Evans on being struck staggered. This enraged the Japanese officer who continued round the group of over sixty men, striking everyone with his sword. Many of the group sustained bad gashes and one man Pte Gray, Royal Scots was knocked senseless. On reaching the end of the group where I was standing , he used his sword and scabbard with both hands and struck me with all his force. I was knocked to the ground in a semi-conscious condition, bleeding profusely from numerous contusions on the scalp". (2)

The POW Camp was bombed and destroyed in a US air raid in June 1945. The POWs were moved to a new camp where they also experienced heavy air raids. Liberation came in August with the surrender of Japanese forces after the use of atomic bombs on Hiroshima and Nagasaki.


They were then flown to Okinawa and from there were to be flown to the POW reception centre at Manila but the plane that Jack Seaby was on a B24 Liberator crashed on take off.  Jack Seaby with several other men were in the bomb bay and when the plane crashed they were trapped in the wreckage. Three men were killed and three including Jack were seriously injured, but he survived again !  He was repatriated on HM Hospital Ship Vasna to Sydney where he was hospitalized at the Royal Naval Hospital.


He returned to UK on SS Acquitania. On arrival in UK  he spent time recuperating from his injuries at the Royal Naval Hospital, Haslar.  His first hand accounts quoted here were sourced from reports he submitted to the commanding officer of HKRNVR in February 1946.


It was not long before  Jack Seaby was off again. He moved to what was then British West Africa, and started working for Ashanti Goldfields as Head of Security. He later joined the Police Force and in the late 1950s he is shown on passenger manifests as a Police Superintendent in Ghana. He married whilst in West Africa to Margaret Mary (always known as 'Peggie') who was a nurse and they had two children Michael and Patricia.


Jack was a survivor. He survived the horror of POW Camps in Hong Kong and Japan, he survived diphtheria and other illnesses, overcame brutal beatings, and survived the sinking of the Lisbon Maru and then finally he survived the plane crash at liberation in 1945.


I was able to make contact with members of Jack's family from whom I obtained the photographs of Jack and learnt much more about his life. After leaving Africa he had worked as Head of Security at the British Mission in Peking and had been there in August 1967 when Red Guards broke into the mission and for his actions and leadership in that incident he was awarded the British Empire Medal in 1968. Other overseas postings took him to hot spots like Beirut and back to Japan where he worked at the British Embassy in Tokyo. He retired in the 1970s and passed away in June 1990 after a remarkable life of action and adventure.


I am grateful to members of his family (Patricia Bussy, Mike Seaby and Pam Bean) for providing the photographs of Jack Seaby and other information about his life before, during and after the war.

Posted by Philip Cracknell at 21:07