I set out one hot summer's day from Wan Chai Gap walking south and downhill towards Bennett's Hill and Aberdeen Reservoir.  The objective was to find the company positions of 'C'  Coy Winnipeg Grenadiers. They had been deployed around Aberdeen Reservoir to defend not only the critical water supplies but also to defend the approaches to Aberdeen and the Royal Naval dockyard. 'C' Coy was commanded by Major John Albert Baillie and consisted of Platoons 10, 11 and 12.
Sgt Leo Paul Berard commanding 12 Platoon recalls how one of his soldiers spotted a rock that previously was not there. Sgt Berard ordered the soldier to take a shot at it. Nothing happened and he fired again.

Then the stone started moving. It rolled down the hill and then what looked like a leg jutted out. We found it was a Japanese sniper. He was one that carried  a bag of grenades instead of a rifle and would sleep  or observe all day underneath a groundsheet sitting on his heels, making himself look like a stone. He was dead. I reported it to the Major. He wasn't pleased. 'You'll have us all tortured', Major Baillie said.(1)

Not far away from the Canadian positions was Flight Lt Donald Hill who commanded a small RAF detachment who had been deployed to fight as infantry after their aircraft had been destroyed during the first air raid one Kai Tak Airfield. In Donald Hill's diary, decoded by Ando Linklater,  he describes  'C' Coy's engagement at Aberdeen Reservoir on the night of the 24 December.

Soon after midnight heavy firing starts just across the bridge. The Jap's weird war cry is plainly heard, and soon a small party of Canadians  retire over the bridge. They report a  heavy attack by Japs who crept up on them  and broke through. We open up with everything we have across the bridge.  The Japanese start shelling us and confusion sets in. Just as they start moving back up the road, Major Baillie advances down the road waving a revolver ... and shouts for volunteers to cross the bridge.(2)

None were forthcoming - they probably thought he was crazy! Baillie went charging across the bridge in a single-handed attack.


Donald (Hill) could not let him die alone. Jumping to his feet , he ran after the Major. Together they reached the other side, unharmed.(3)

The Japanese had by then dispersed and were trying to work their way around the reservoir along the shoreline. A mortar was set up to fire at the Japanese as they crashed their way through the undergrowth. However, disaster struck as the first shell to be fired hit the overhead branches of nearby trees and exploded amongst the men in the mortar group, blowing off one man's right arm, almost severing the leg of another and wounding others.

We can hear the Japs' wild animal calls. We get the wounded into a dugout where there are some others that were badly wounded and try to stop their bleeding. We only have bandages and several of them are in danger of bleeding to death. Their moans are terrible and although I keep ringing for an ambulance, none arrives. What a horrible mess, I try to restore some kind of order.(4)

Back to the present - as I walk along the military road I start to come across splinter proof war shelters along the side of the road. These were to the north of the company positions and closer to their battalion HQ at Wanchai Gap. 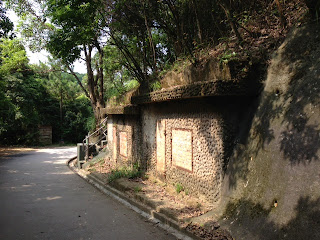 There was also a water tank with fragmentation damage that would have been used to supply drinking water to the company positions. 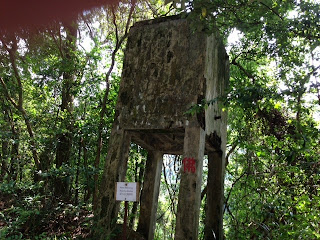 A little further on I came across a cluster of bunkers which I assume would have been 'C' Coy HQ. 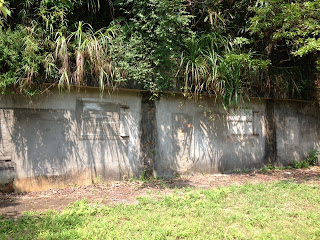 A little further down was the bridge over the reservoir that figured in the story of confused fighting above. 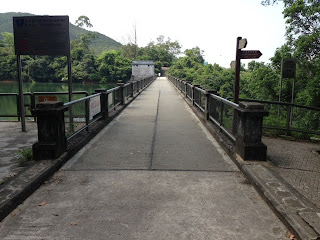 You can almost picture Major Baillie charging across pistol drawn and with Donald Hill hard on his heels. Nearby there was a pillbox. It's tower visible above the slope in the picture below: 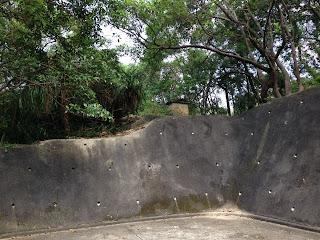 I clambered up to look at the pillbox - its door still intact (see below) : 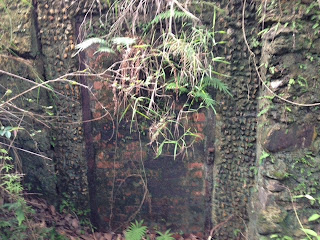 Crossing the bridge the path leads on to Bennett Hill the last line of defence with a string of assorted troops, RAF, Royal Navy and Canadians lying on the reverse slope of the stony hill, whilst under mortar fire and holding the defensive perimeter to defend Aberdeen and the Royal Navy Dockyard. 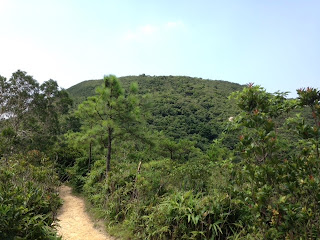 On the hill in the heat of a Hong Kong afternoon, I found a British or Canadian webbing buckle, a gas mask clasp, part of a Mills grenade and two spent Tommy gun rounds (.45). 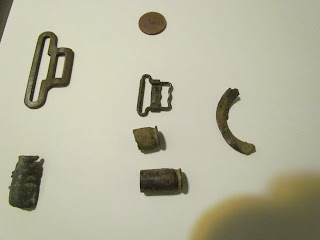 In a different location but not far away I once found a cobalt blue WW2 Army water bottle buried (actually I think stashed) near the path on Mount Cameron (see the picture below), 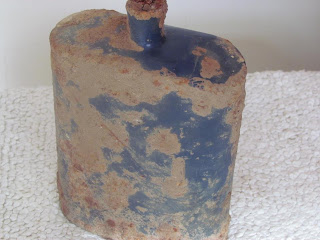 When I lifted it out of the ground,  it was heavy, it was still full. The cork was welded into the top and water-tight after 70 years! Knowing that some soldiers put rum in their water bottles. I opened it took out the liquid but it smelt and looked like off-colour water. I put it to my lips - hesitant to drink it! but the taste was water - but it was WW2 water almost certainly dating back to that fateful month - December 1941.  It was truly a taste of history!

(2) Quotes from the diary of Donald Hill in Appendix to "The Code of Love" Andro Linklater.

(4) Quotes from the diary of Donald Hill in Appendix to "The Code of Love" Andro Linklater.