PB 14 is situated on the shoreline below Brick Hill and quite close to the Country Club.  To get to it  - you have to leave the raised concrete pathway known as Mills & Chung Path and go down to the rocky foreshore. Walk past the back of the Hong Kong Country Club clambering over the rocks and you will get to the PB which is reasonably accessible. The PB and Lyon Light structure both remain.  The story is a sad one in that the crew in the two structures were surrounded and eventually all killed - possibly put to death after surrender. 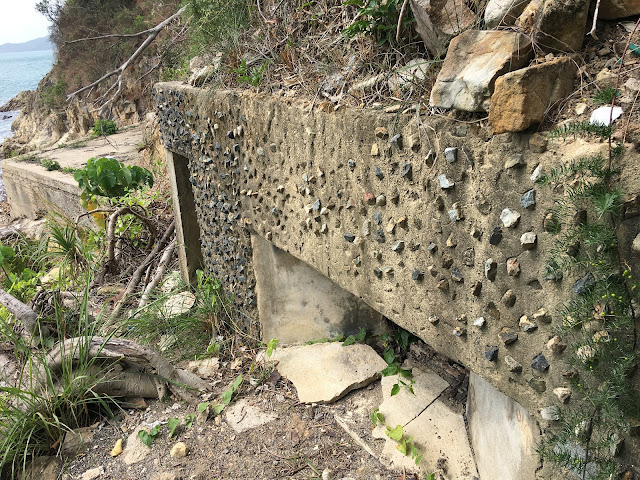 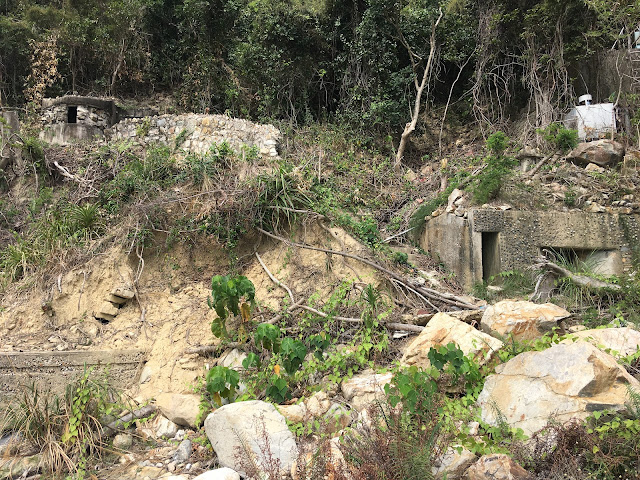 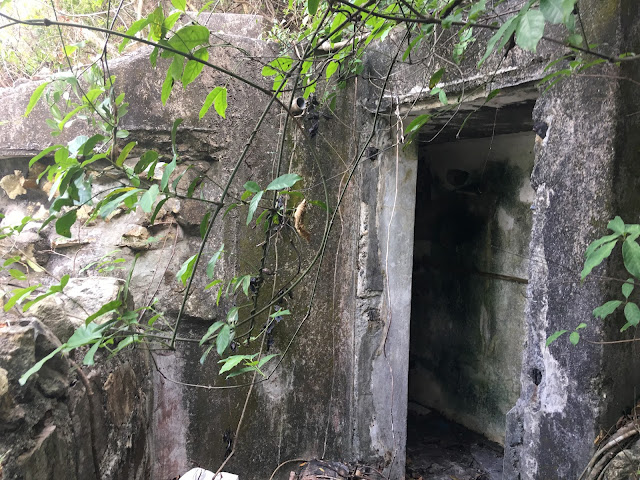 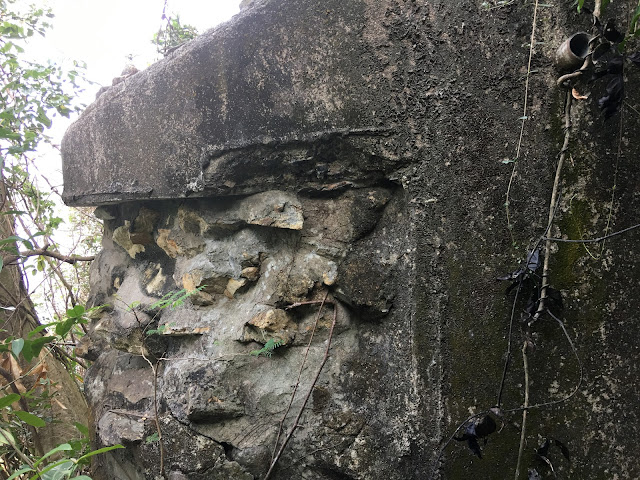 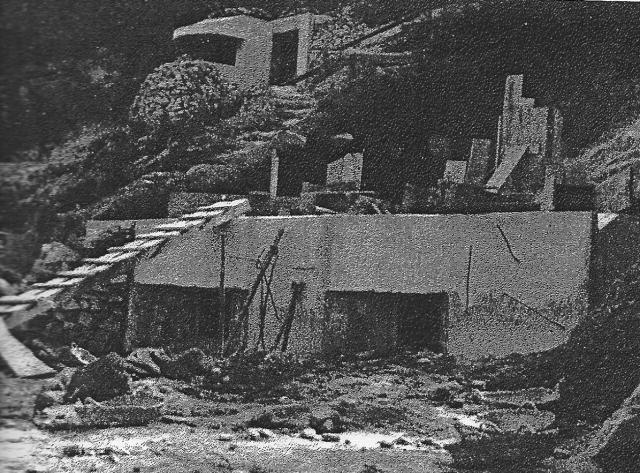 Photograph of what is thought to be PB 14 and LL 14 under construction. 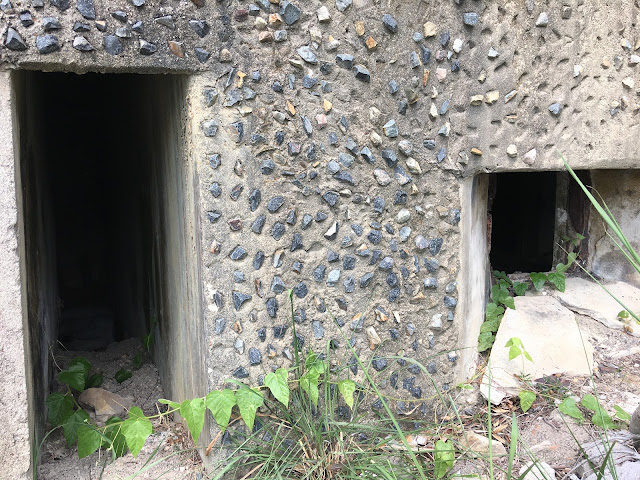 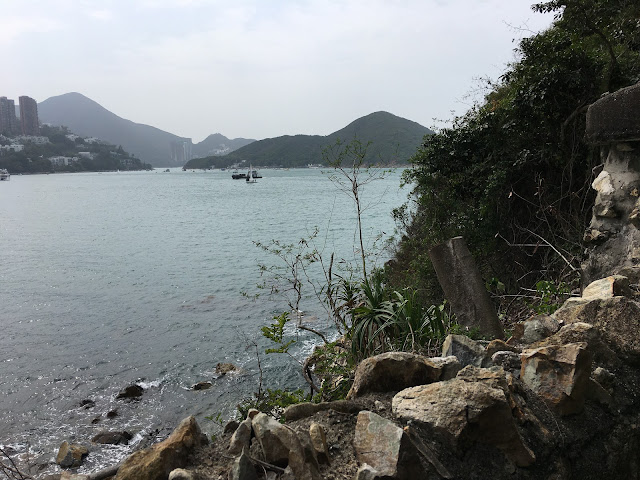 The view across the bay from PB 14

On Saturday 20 December, there was fighting around the government food store, hutments and paddy fields in Wong Chuk Hang, near where the country club is today. One casualty (Pte Bridge) from the fighting was taken to the pillbox (PB 14). On Sunday 21 December, PB 14 reported that they were surrounded  and running short of food and water. On Monday 14 December, an ambulance managed to get through to PB 14 without being shot-up. The one casualty, Private Bridge, was taken away and food water was passed to the PB crew.  On Tuesday 23 December, PB 14 was attacked by grenades. Major Marsh, commanding 'C' Coy described the plight of the gallant crew.

During the day on Tuesday 23 December, several appeals for help came from PB 14 by telephone to which I was powerless to respond. It appears that during the previous night ... some of the PB crew had manned the Lyon Light shelter with a Bren gun to cover the PB and prevent the enemy getting on to it. However, the Japanese had thrown grenades through the shutters, and the occupants were all wounded. I finally tried to get an ambulance through to them again, after all efforts by Royal Navy MTBs and the gunboat [HMS Cicala] had failed to relieve them. I had hoped to obtain an armoured car to relieve them, but none available . ... Early in the morning of 24 December PB 14 again rang up and after a few whispered words about the enemy being on top of their PB the telephone went dead, and I heard no more. (1)

All the crew were killed - some, it is thought, after surrendering the position.

We don't know exactly what happened because there were no survivors. It seems that two or three men were killed in the Lyon Light structure. It is likely that at some stage on 24 December, the crew in the PB surrendered after some had been wounded or killed by grenades inserted through a loophole.

An extract from war crimes testimony, provided by Lt-Col Ride and Major Crawford, describes how they found the bodies of six Middlesex Regiment soldiers. The men had been tied-up and then killed, some by sword and others by bayonet. They were found on the steps to LL 15 (close to where the Victorian Recreation Club is located today). LL 15 is some 400 to 500 metres from PB 14.

On the steps leading to Lyon Light No. LL 15 by the roadside, west of Deep Water Bay, were the bodies of six Middlesex other ranks. Their hands and feet were still tied. There were large blood stains on the cutting and on the roadside on the opposite side of the road, and streaks of blood stretching from this, across the road to the steps where the bodies lay in a heap. Their heads had been almost completely severed by sword cuts.

It is unlikely that these men belonged to PB 15 because PB 12, 13 and 15 had been evacuated and  their crews with their Vickers guns had been deployed to Bennet's Hill on 19 December.  (Source: Mx War Diary)
It is likely that these men may have been the remaining crew of PB 14. They may have been marched along to Deep Water Bay and executed opposite LL 15. What a gruesome end for these soldiers.

PB 14 Crew
Pte James Michael Murphy
He was born in Glamorgan, Wales in November 1913. In 1929, aged sixteen, he joined the Middlesex  Regiment as a musician. He married while stationed in Colchester, in 1935, to Rose Mary Vail (1916-1975). They had three children. He left the army in 1936. Following the start Second World War started in September 1939 - he rejoined the Middlesex in April 1940. In March 1941, he was sent out to Hong Kong to serve with the 1st Battalion. His family remained in the UK. 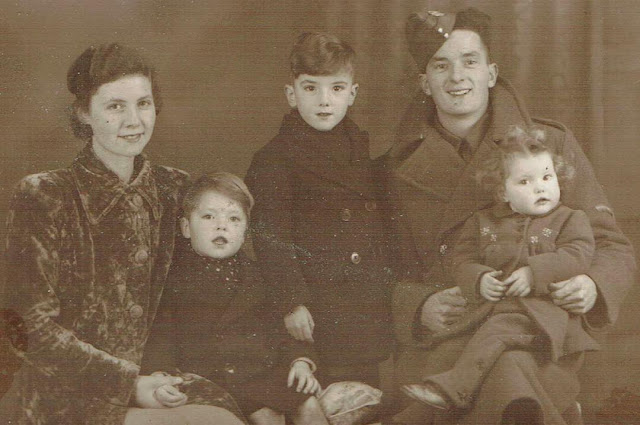 David Murphy for the photo and information relating to his grandfather Pte James Murphy.

Posted by Philip Cracknell at 17:24