This story is about a Royal Navy wartime sailor, Stoker Petty Officer Frederick Dack, and the submarine HMS Unshaken (P54) in which he served during the Second World War. Frederick Dack, predeceased his wife, Joan. It was only after Joan passed away, and while her son, Martyn, and her grandaughter Nic together with Nic's husband Jay Dorman were sorting out her possessions that they came across the bag. The bag contained Frederick Dack's war photographs, including shots of  HMS Unshaken and her crew. There was also his Royal Navy service record tracking his wartime career. He had been awarded a Mention in Dispatches (MiD) and there was a copy of the award certificate dated April 1944. The submarine on which he served had been constantly in action while based in the Mediterranean.  He and his ship mates had been in the thick of naval action and always in harm's way.

Frederick was born in Downham Market, Norfolk in 1920. He joined the Royal Navy, aged twenty, in 1940. He commenced basic training at the shore establishment, HMS Royal Arthur. He then underwent further training at HMS Pembroke in Chatham and then at HMS Dolphin, the submarine training base at Gosport in Hampshire. HM Submarine P54 was laid down in 1941 at the Vickers-Armstrong yard in Barrow-in-Furness. She was launched in February 1942. Her first commanding officer was Lt Richard Gatehouse. He commanded from April 1942 until June 1942. The submarine was commissioned in May 1942. Lt Charles Oxborrow was appointed as commanding officer on 21 June 1942. Initially the submarine had no name and was referred to simply as P54. It was not until 1943 that she was given the name Unshaken as one of the Royal Navy's U-class of submarines. It is a striking name, and conjures up the Commander Bond-like image of 'shaken not stirred'. She was, and still is, the only Royal Navy vessel to bear that name. 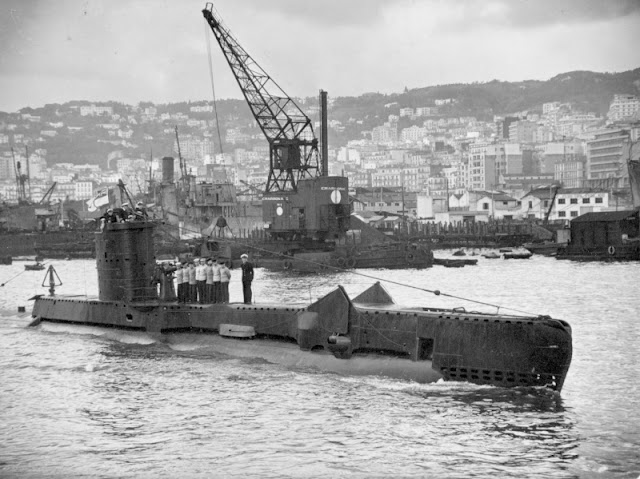 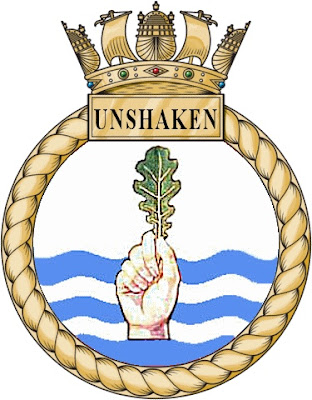 Unshaken had twin screws powered by diesel engines which could produce a speed of 11.5 knots on the surface and a speed of 10 knots when submerged. She had a normal complement of 33 officers and men. She had four forward 21-inch torpedo tubes and she  had a 3-inch gun (76 mm) mounted on her deck casing. 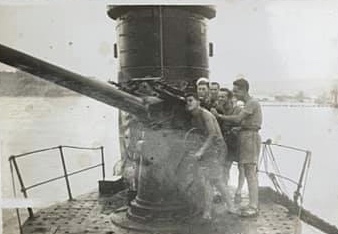 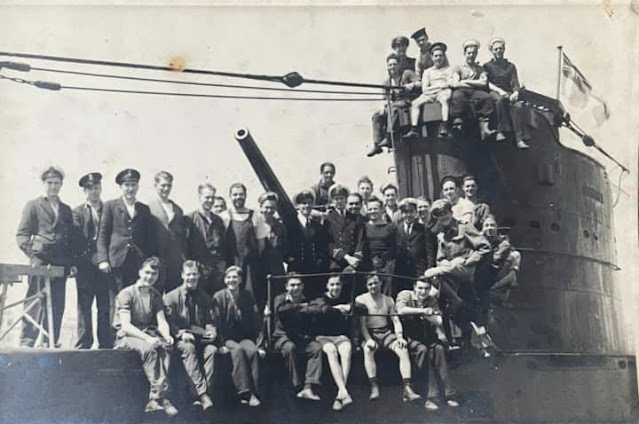 I believe Frederick Dack first joined P54 in April 1942. On 25 June, a month after commissioning, she sailed out of Lerwick, in the Shetland Islands, and was deployed  off the northern Norwegian coast. Her orders were to provide a submarine screen for the Artic convoy PQ-17 and QP 13. In particular to protect the convoys from enemy surface ships. On 5 July 1942, P54 reported a sighting of the German battle ship Tirpitz accompanied by the heavy cruiser Admiral Hipper with escorting destroyers and MTBs. The German surface fleet were stalking the Russian bound convoy. A Russian submarine and an RAF Catalina flying-boat also reported sightings. Later that day, a German aircraft spotted and bombed Unshaken. Three bombs were dropped but they all went wide. Having been observed, the German Admiral in command ordered the surface ships to return to base. Unshaken commenced her second war patrol on 4 August 1942. This time she was ordered to patrol off the coast of southern Norway. On 12 August 1942, Unshaken drew her first blood when she torpedoed and sank the German merchant ship, Georg L. M. Russ. Another German merchant ship, Wolfgang L. M. Russ, was fired on but the torpedo missed its target. In September, Unshaken commenced her third war patrol providing a submarine screen for convoy PQ-18. In October 1942, she was ordered to join the Mediterranean fleet and she sailed south to Gibraltar from her base at Dundee. 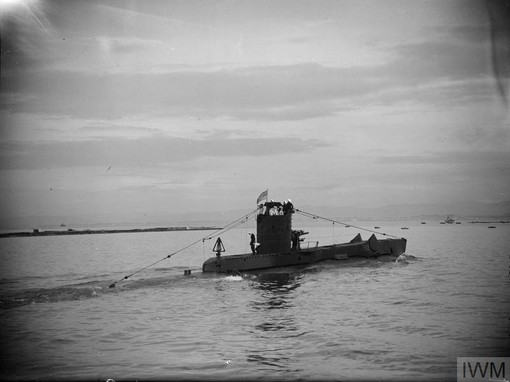 Unshaken in the Mediterranean (Source: IWM)

The IWM photograph carries the caption 'HM Submarine Unshaken leaving port on patrol against Axis shipping in the Mediterranean'. At Gibraltar, she joined the 8th Submarine Flotilla ahead of the Allied invasion of North Africa. One of her first actions was landing, and then picking up, a reconnaissance party from a beach at Oran on the Algerian coast.

On 25 November, disaster struck when the submarine surfaced during a storm off the coast of southern France. The commanding officer, Lt Oxborrow, and two crew members, the Yeoman of Signals and an Able Seaman were lost overboard when the submarine un-intentionally submerged while they were still on the bridge. The log book describes the submarine slipping down 30 feet. A search was organised but the three  men were not seen again. Sub-Lt Herbert Westmacott assumed command until a replacement officer, Lt Jack Whitton, from the 8th Flotilla, took command at sea after coming aboard from HMS Samphire, a flower class corvette. He remained in command of Unshaken until May 1944.

Finally, her luck changed and on 8 April 1943 she sank the Italian merchant vessel, Foggia having fired three torpedoes. On 10 April she surfaced and fired at a suspension bridge located near Korba on the Tunisian coast. Fifteen rounds were fired with the deck gun and several hits observed. On 28 April, two British destroyers attacked Unshaken while she was surfaced, assuming she was a German U-boat. Unshaken dived to safety and was undamaged. Later that day she sank the Italian torpedo boat Climene. 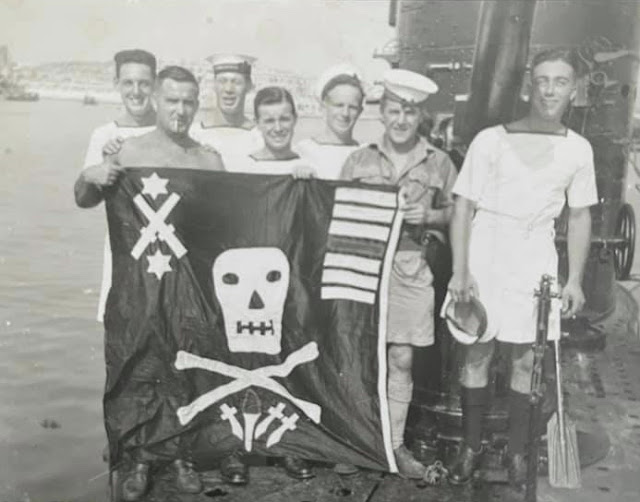 The Jolly Roger flown when entering harbour after a successful mission with Frederick Dack at right
(Courtesy: Jay & Nic Dorman)

On 28 May 1943, Unshaken landed a raiding party on the the island of Pantilleri located between Sicily and Tunisia. The raiding party consisted of two officers and six other ranks. The mission was to capture a sentry to gain intelligence by interrogation. All went well at first, the party were successfully landed and a sentry was duly captured. However the sentry could not be silenced and subdued. His shouts alerted the other guards and four Italian soldiers came rushing out and were killed by the raiding party. However one of the British soldiers was seriously wounded in the exchange of fire and had to be left behind. The captured Italian resisted all efforts to get him down the cliffs and eventually he had to be left behind. The raiding party returned to Unshaken, but without the sentry the mission was not completed.

On 22 June 1943, Unshaken sank the Italian two-masted schooner Giovanni G. In the afternoon she made an unsuccessful attack on an Italian merchant vessel which was escorted by two corvettes and a torpedo boat. The corvettes dropped depth charges and a near miss caused some minor damage to the submarine. The next day Unshaken sank an Italian merchant ship, Pomo, which was escorted by a corvette and a torpedo boat. On 14 July she sank an Italian patrol boat and on 10 August she sank the Asmara, an Italian troop transporter. Three days later she engaged a German u-boat on the surface.

On 9 September, Unshaken came across a submarine and closed in for the attack thinking it was a U-boat. However, they saw it was an Italian submarine the Ciro Menotti. They had  already received a signal advising that the Italians had surrendered the previous day. Unshaken surfaced and fired one round from the 3-inch gun across the Italian submarine's bows. The Italian submarine responded with machine gun fire. The British submarine pulled away to torpedo range. The Italians crew ceased firing. The boats moved to hailing distance and the Italian captain said they were under orders to head for Brindisi. She was forced to stop and a boarding party was sent across. Jack Whitton, the British captain, ordered the Italians to turn around and alter course for Malta. The 3-inch gun was trained on the Italian captain's conning tower. He relented and a boarding party was sent across consisting of three ratings under Lt Swanston. One Italian officer and three ratings were taken aboard the Unshaken as hostages. The Italian submarine was duly escorted to Malta.

On 2 October Unshaken engaged a German submarine-chaser with two torpedoes in the sea area north of Elba. The German vessel counter-attacked dropping ten depth charges. On 7 October Unshaken attacked a German tanker and a general cargo ship escorted by two E-boats. The torpedoes missed and the E-boats fired several depth charges. In November Unshaken sailed to Britain for a refit in Dundee. The refit scheduled for January 1944 was postponed and Unshaken joined the 9th Submarine Flotilla operating off the Norwegian coast. 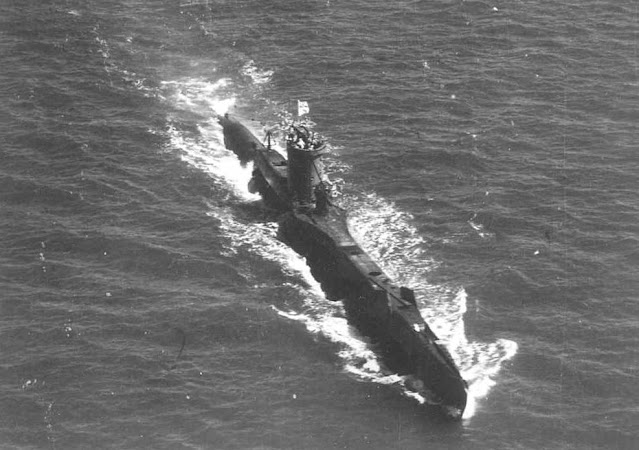 Unshaken carried out a series of war patrols off the Norwegian coast. One of her last engagements was in April 1944 when she sank a German merchant ship the Asien. In late May 1944 she was scheduled for overdue refit. On 17 July 1944, Lt Jack Pearce was appointed commanding officer of Unshaken and from this period until the end of the war she was used mainly for training purposes rather than war patrols.

HM Submarine Unshaken was de-commissioned in September 1945. She was broken up in February/March 1946 at Troon on the Firth of Clyde. Stoker Petty Officer Dack was demobilised at about the same time in March 1946. The submarine service, sometimes referred to as the silent service, was a demanding role and required men of strong character. Any submarine, but particularly World War 2 submarines would have been cramped and uncomfortable. Most of the time there was no sunlight and no fresh air. The submarines were closely packed with machinery and torpedoes. Fresh water was scarce and washing oneself was not permitted.  Silence was required to avoid noise detection. It was a dangerous occupation. Your chances of escape if hit by a mine or a depth charge were not good. However, it was an elite service, and once a submariner always a submariner. At times it must have been exhilarating, especially coming back from a successful mission flying the Jolly Roger. There was always that combination of fear and excitement with every man attending to his duty and knowing that his shipmate would be doing likewise. It was a brotherhood of the sea. 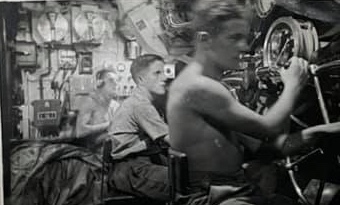 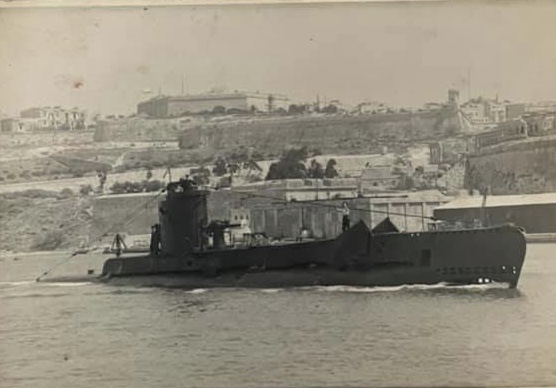 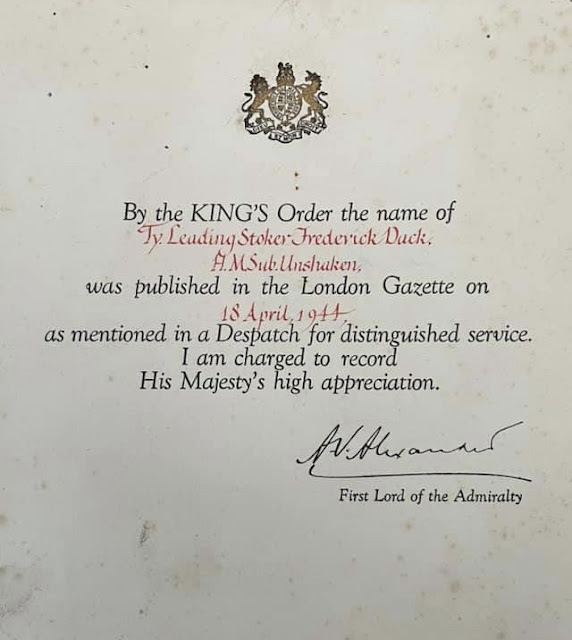 Posted by Philip Cracknell at 06:01