I realise that I am always writing about other people's Dads and not my own. So this story is about my Dad who served in the Royal Navy in WW2.

My father, Gordon Frederick Cracknell, was born 10 December 1923 in Wickford, Essex. His father, my grandfather, Frederick James Cracknell, had served in the British Army on the Western Front during the First World War and had risen to the rank of Captain. After being demobbed he worked for a small company, I don't know the name of it, but I think they did garment manufacturing and I think he had a sales role. He married Annie Wilson on 25 December 1919. A Christmas Day wedding. My sister, Lynn, has a pen and ink drawing he made of her while serving in the trenches. They got married at St Mark's Church in Lewisham. They had two children, Gordon (b. 1923) and Basil (b. 1925).

My father attended Battersea Grammar School. He left at the age of sixteen and got a job working with the Sun Life Insurance Company. This would have been around 1939 at the time the Second World War began. He later applied to join the Fleet Air Arm in or around 1942 after he had reached the age of eighteen. He once told me that all the men that he trained with were killed in action and he may have met the same fate had he not been dropped from flying training. I recall him telling me that he was sick every time he flew and that was why he was dropped. He was very disappointed but he had at least learnt to fly. He was then moved to the seaman side of the Royal Navy and became an officer in the Royal Naval Volunteer Reserve  (RNVR) known as the 'wavy navy' because of the wavy stripes worn on their uniform sleeves. I don't know where he served in 1942/43, but I know that from 1944 to 1946 he was serving on the destroyer HMS Undaunted. The photograph below shows my father as a Sub-Lt RNVR probably taken on Undaunted in the Far East during the Pacific War. 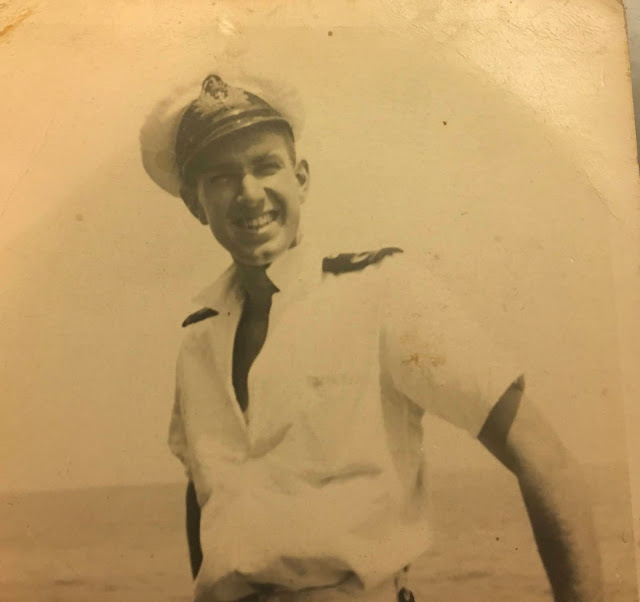 Sub-Lt RNVR in the Pacific War (Source: Author's collection)
The photograph below has scribbled on the back 'taken at the Admiralty Islands (Manus)'. Manus was where the liberation fleet sailed from to repossess Hong Kong in August 1945, although this photo would have been taken sometime in 1944. 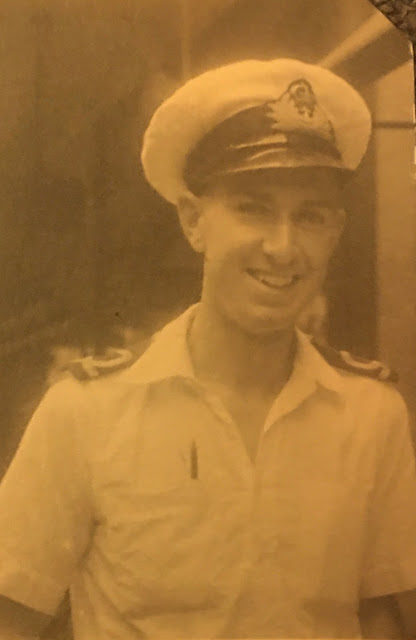 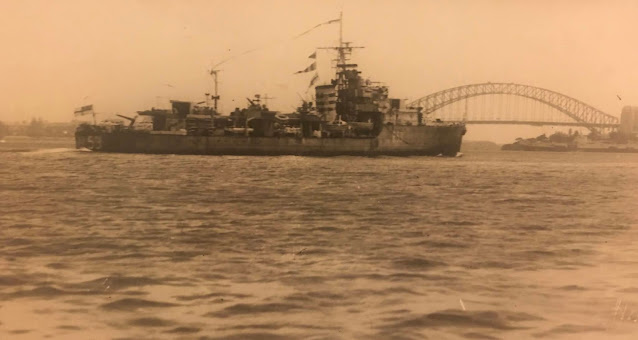 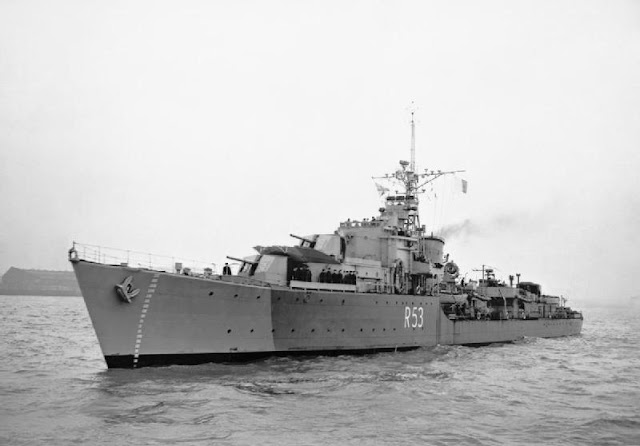 HMS Undaunted sleek and fast  (Author's collection)
The U-class destroyer, Undaunted,  was built at Cammell Laird and launched in 1943. After fitting out she was commissioned in March 1944. Most of the ship's company joined her in February 1944 and I assume that was when my father joined her as a 21-year-old Sub-Lieutenant. She was fast and agile with a top speed of 37 knots (43 mph). Her main armament consisted of four 4.7-inch guns in single turrets (A, B, X and Y). My father commanded X and Y (the two rear guns). The armament included two 40mm Bofors and six 20mm Oerlikon guns. In addition, she carried two sets of torpedo mounts. Her 4.7-inch guns could elevate to an angle of 55 degrees making her a useful anti-aircraft vessel. Her guns could also be used to provide bombardment to support land operations. 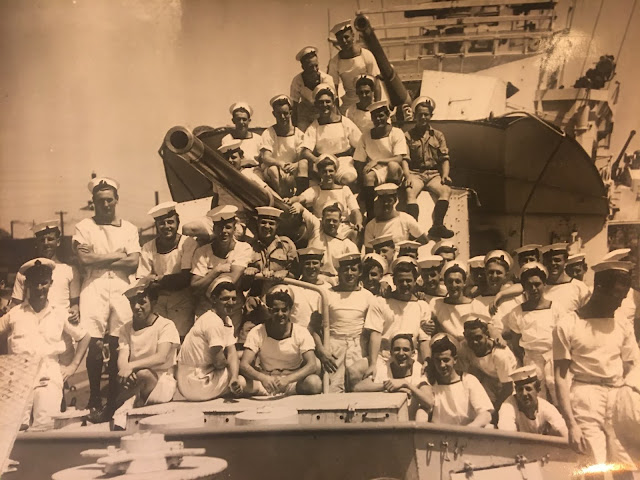 A and B guns surrounded by the crew. (Author's Collection)
After completing her work-up at Scapa Flow she acted as an escort for the aircraft carriers involved in the operation to sink the Tirpitz. At about this time she also served as an escort on the Arctic convoys.  After my father retired from the Navy, at the age of 35, he was placed on the reserve of officers and kept his uniform at home. I remember this included a pair of thick yellow and black arctic gloves. My sister once used these gloves to pick up a hedgehog from the road and bring it to the safety of our back garden. In June 1944, Undaunted took part in the Normandy Landings where she covered Sword Beach presumably providing bombardment and naval gunfire support for the Army.
It was at Normandy that she took aboard General Eisenhower, the Supreme Commander, and Admiral Ramsay. The two senior officers were embarked from the cruiser HMS Apollo which had grounded and damaged her propellors. Undaunted gave them a fast passage back to Portsmouth Harbour. After D-Day, Undaunted operated in the Mediterranean. She then sailed through the Suez Canal to Aden and Bombay acting as an escort to troopships. At this time she was assigned the pennant number  'D 25' shown in the photograph below from my father's wartime album rather than her normal pennant 'R 53'. 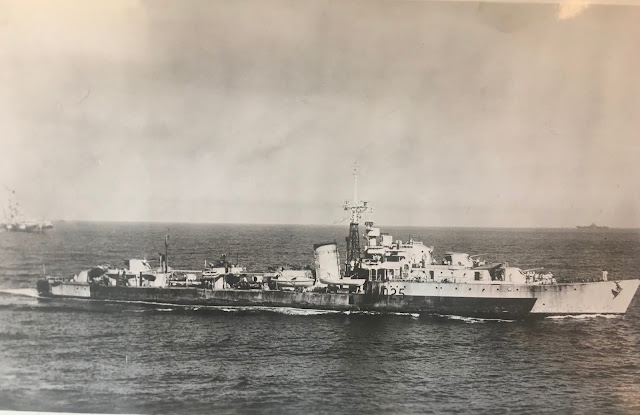 HMS Undaunted with wartime camouflage and bearing pennant number 'D 25' (Author's Collection)
She joined the British Pacific Fleet acting as an escort for the larger ships and providing anti-aircraft support. My father remembered the kamikaze attacks and particularly the impact they had on the American carriers with their wooden flight decks. He recalled the bravery of the US Marines at Iwo Jima and Okinawa. It was at this stage that his fellow officers played a rather mean trick on him. His fellow officers knowing he could fly aircraft, from his time with the Fleet Air Arm, told him that the Admiralty was looking for volunteers to fly kamikaze missions against the Japanese. He thought about it, he wrestled with it, but the fact of the matter was that he could fly and volunteers had been called for. He offered his services only to find it was a practical joke.
In early September, the formal signing of the surrender of Japan took place in Tokyo Bay aboard the battleship USS Missouri. HMS Undaunted acted as Guard Ship. I recall my father telling me that he once had to take a party of sailors from Yokohama to Tokyo by train. The train was utterly crowded. He spoke to a member of the platform staff. The staff member spoke to the passengers and they quickly and willingly cleared a carriage without demur. An insignificant incident but I think he was impressed by the discipline and lack of hostility from ordinary people to the victors that were occupying their country. He even got to do some sightseeing in post-surrender Japan. There are photographs of temples, lakes and waterfalls at Nikko. 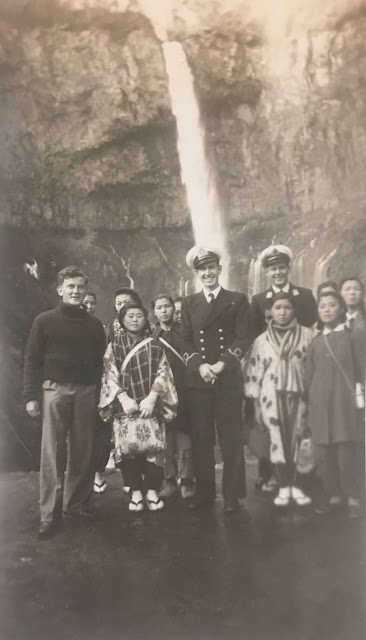 In Nikko - my father in front with a midshipman (Source: Author)
The war was over and the destroyer now sailed south to Sydney. She then sailed to Auckland, New Zealand where she undertook a 6-week refit having steamed 150,000 miles since commissioning some 18 months previously. In January 1946, she sailed home via Sydney, Melbourne, Cape Town, St Helena, Freetown and Gibraltar. She arrived at Devonport on 19 March 1946. My father's album has photos of some of these stops on the homeward bound. 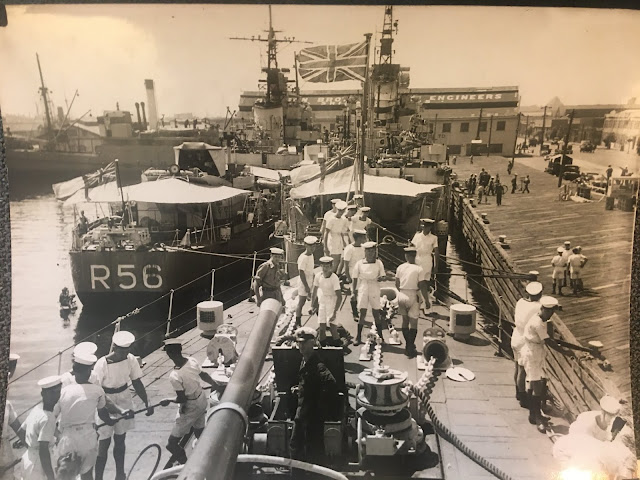 On the homeward bound - HMS Undaunted in the foreground (I think either in Sydney or Melbourne) - (Source: Author) 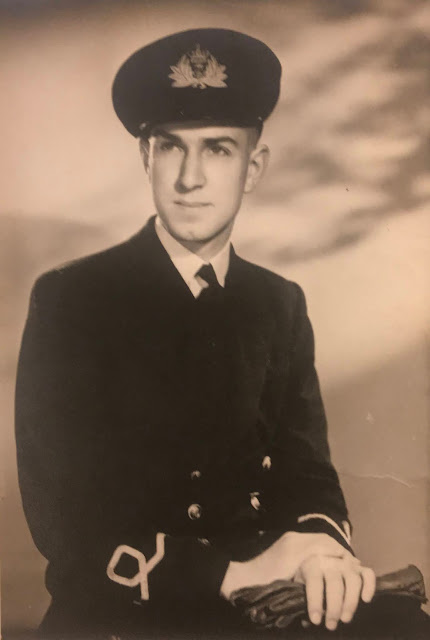 Portrait photo of my father as a Sub-Lt RNVR. (Source: Author)
After the war, my father decided to stay in the Royal Navy. He loved the service. He was promoted to Lieutenant and given a permanent commission (straight stripes on the uniform sleeve). It was a difficult time, the Navy was putting ships into the reserve and reducing the personnel. In 1947/48 he served on HMS Hind, a Black Swan class sloop. In 1949 he served on HMS Largo Bay an anti-submarine frigate.  He was the executive officer but I think these ships had skeleton crews and were in the reserve fleet.  He used this time to study and qualify in Accountancy. In 1950/51 he was back in a sea-going role on HMS Pluto, a fleet minesweeper. At a cocktail party on Pluto, he met the love of his life, in the form of Leading WRN Elizabeth ('Terry') Walker. They married at Portsmouth Cathedral in September 1951 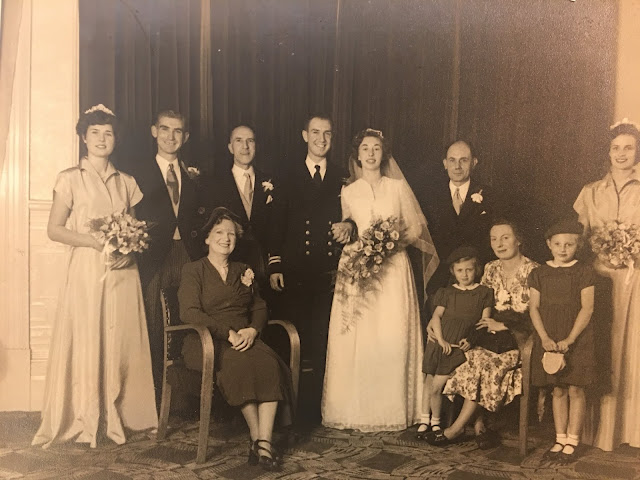 Bridesmaid, Basil Cracknell, Annie Cracknell, Frederick Cracknell, Gordon & Terry Cracknell, Bill & Lilian Leonard,
Bridesmaid. (Source: Author's Collection)
Basil was my father's younger brother. Annie and Frederick were my father's parents, Lilian Leonard was one of my mother's sisters. She was given away by Bill Leonard. The happy but exhausted-looking couple took their honeymoon in Lynton, Devon. 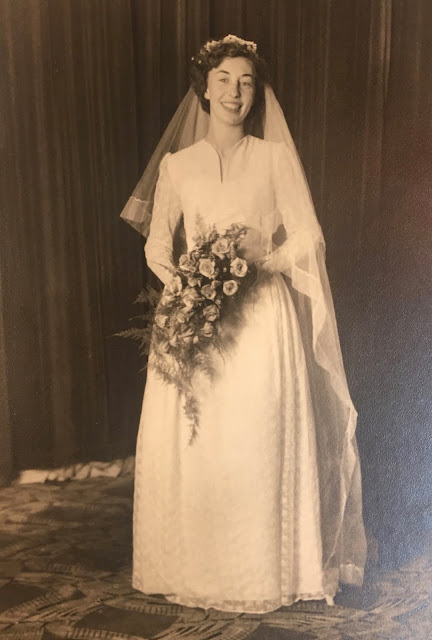 My mother at her wedding aged 21 (Author's Collection) 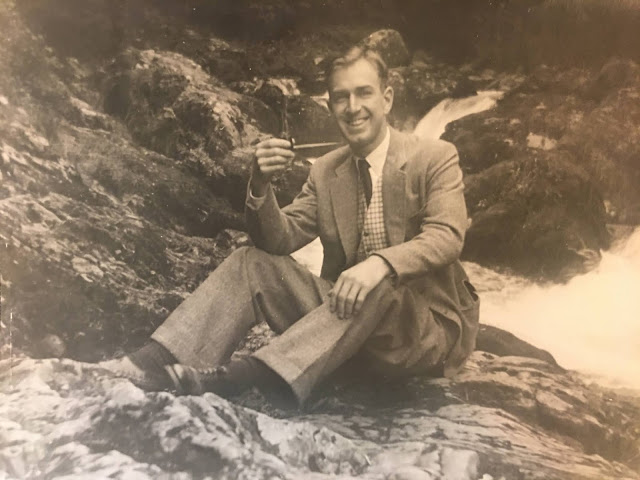 My father, aged 27, on honeymoon in Devon (Author's Collection)
In 1952 my father was attached to the Royal Australian Navy. As a newly married couple, they sailed from Southampton on the MV Dominion Monarch on 11 January 1952 (my mother's 22nd birthday). They arrived in Sydney, Australia on 11 February 1952. The ship had stopped at Las Palmas and Cape Town. They lived in Sydney and later in Frankston, Melbourne. My father served on HMAS Hawkesbury (1952) and Cerberus (1953). 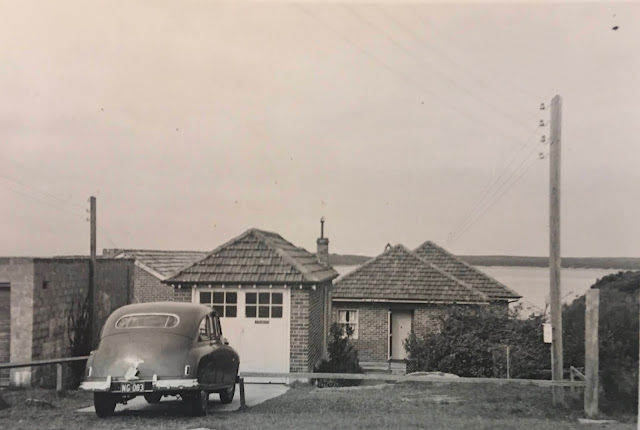 '' my parent's bungalow in Cronulla NSW. Their first real home (Author's Collection)
I always thought they had a Holden but a friend tells me the car in the pic (above and below) is a UK-built Standard Vanguard. So perhaps they shipped it out from the UK  when they moved to Sydney. 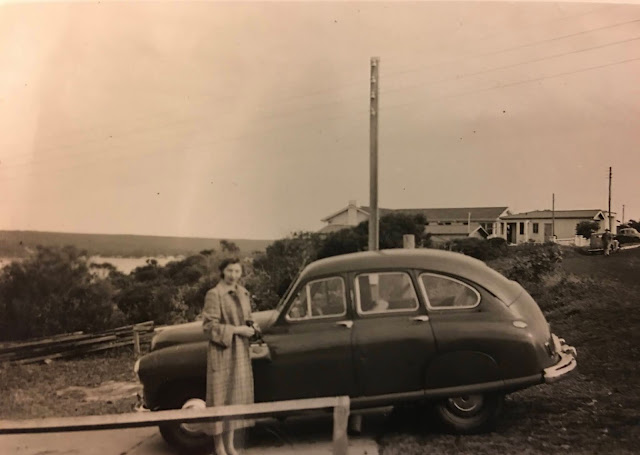 My mother with the car outside their first home at Cronulla (Author's Collection)
They moved from Cronulla to Gordon. 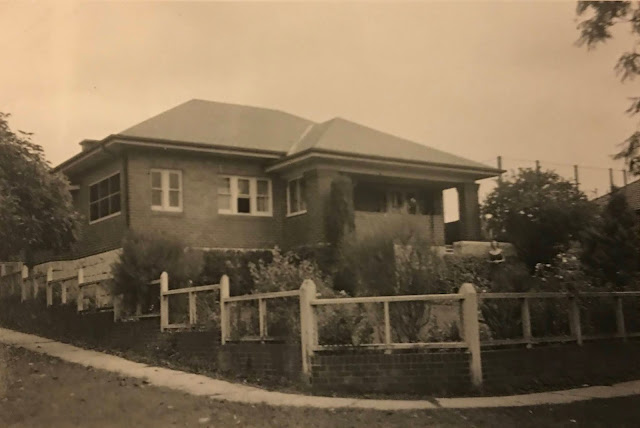 Their second home at 59, Nelson Street, Gordon, NSW.  (Author's Collection)
My elder sister Lynn Elizabeth was born in Melbourne in May 1954. Two months later my parents with their baby daughter returned to the UK on the Oronsay.  On return to the UK, my father was stationed at Portsmouth Barracks as Assistant Training Officer. The family then moved to Dovercourt in Essex when my father was stationed at Harwich. I was born in Colchester, Essex in April 1956. My father was by this time a Lt-Commander. He was commanding officer of HMS Clarbeston a coastal minesweeper involved in fishery protection. 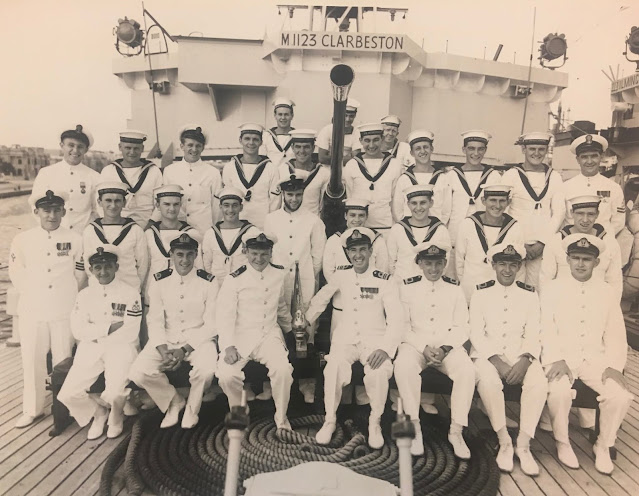 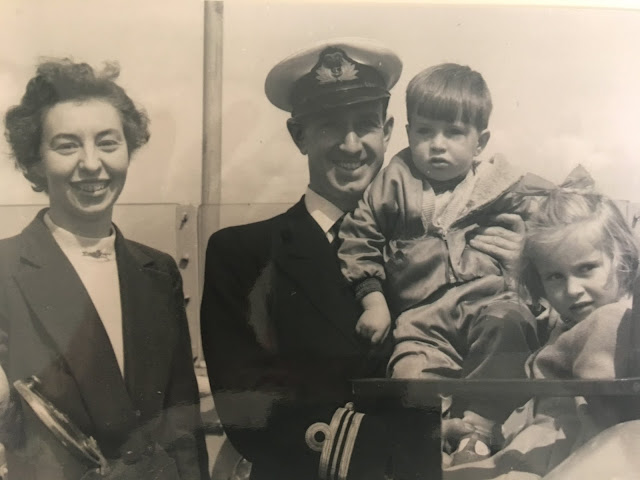 Mother, Father, me and my elder sister around 1959 - just before my father left the Navy (Author's Collection)
The family moved from Harwich back to Portsmouth where my younger sister, Julie Anne was born in January 1959. At this time the Navy was making cuts. Officers were being offered early retirement at a reduced pension. My father had responsibility for his wife and three children. What would best for the family? The service life was less well-paid and involved long periods of absence. It was a hard decision because he loved the Navy and he was doing well in his career. He had passed the staff course and had been given his own command. However, he decided to take the option for early retirement at the age of 35 in 1959. He was accepted for a role with Unilever in the Audit Department. The family moved from Portsmouth to Banstead and my father commuted to Unilever House near Blackfriars Bridge. In 1964, my father was posted overseas and the family moved to West Pakistan, then later to Venezuela, Trinidad, Chile and Uganda.
In about 1983, my father retired for the second time. My parents settled in a pretty village in Kent. My mother passed away in 2015 and my father in 2017. They had a long and happy marriage and they always remained cheerful. As for HMS Undaunted, she was taken into the reserve fleet after returning from the Far East in 1946. She remained 'mothballed' until 1953. She was then converted into an anti-submarine frigate. She was recommissioned in 1954. In 1959 she was fitted with a helicopter flight deck. In 1974 she was back in the reserve fleet. In 1978 she met an ignominious end. She was used as a target ship for missiles including Exocet, Sea Cat and Sea Slug. She withstood these but was finally sunk by torpedoes fired from the submarine Swiftsure. Today she rests in her watery grave somewhere out in the Atlantic Ocean.
.....................................
Gallery 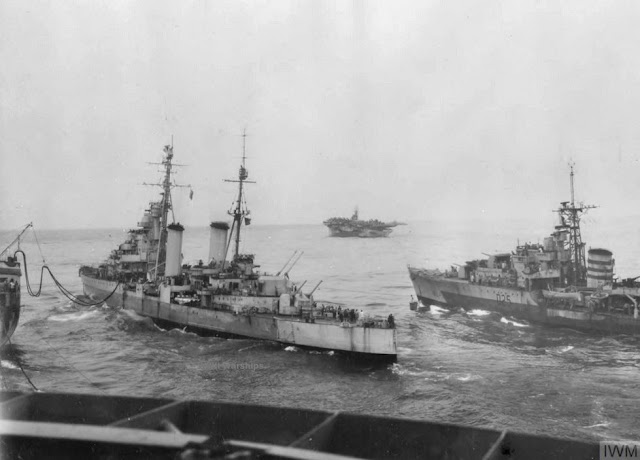 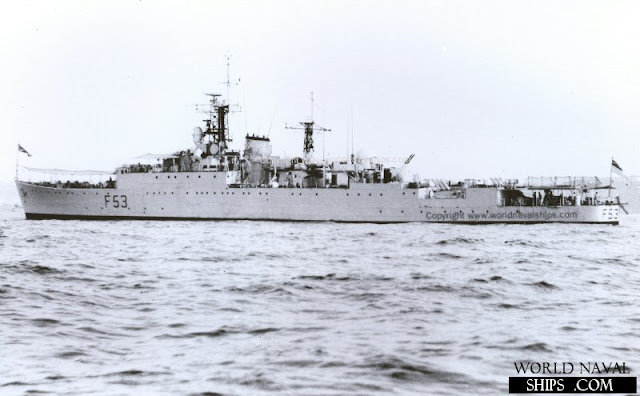 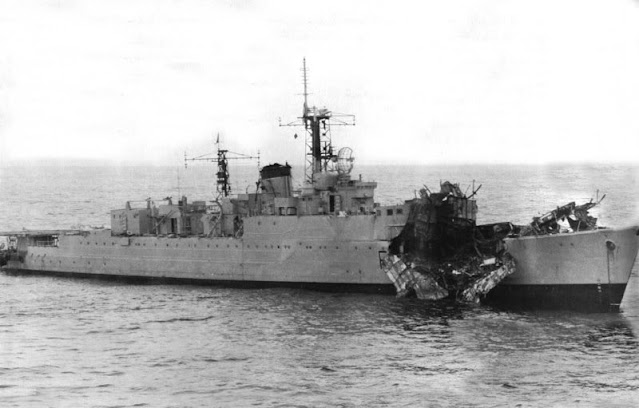 Undaunted used as a target - the damage done by an Exocet  missile (Source: Internet)
Posted by Philip Cracknell at 03:44