Humphrey Fleming Senhouse was born in 1781 in Barbados where his father, an officer in the Royal Navy, was serving as Surveyor General for Barbados and the Leeward Islands. Senhouse joined the Royal Navy in 1797 at the age of sixteen. His first ship was HMS Prince of Wales, which had been launched in 1794 at Portsmouth. She was a 98-gun ship-of-the-line. She was the flagship of Admiral Sir Henry Harvey, commander of the Leeward Islands Station, and responsible for the capture of Trinidad from the Spanish. Later that year, in November 1797 Senhouse transferred to the gun brig Requin, a former French warship (Le Requin) captured in 1795 and pressed into service with the Royal Navy. A small ship with a complement of around sixty officers and men and a single gun deck equipped with ten 4-pounders. The commander Lt William Wood Senhouse was one of Humphrey Senhouse's brothers. In 1799 Senhouse sailed to England on Requin. Senhouse then served on HMS Fishguard, a 48-gun frigate, formerly a French frigate (Resistance) that was captured by the Royal Navy in 1795.
In 1802,  Senhouse passed the qualifying examinations and was promoted to Lieutenant. He served at the Battle of Trafalgar, 21st October 1805, onboard HMS Conqueror a 74-gun ship-of-the-line which was in the thick of the action throughout the battle. She was commanded by Captain Israel Pellew. Conqueror was in the van, she was fourth in line in the weather column led by the flagship HMS Victory. Villeneuve's flagship the Bucentaure surrendered to Conqueror's Captain of Marines who had been put aboard to take the surrender whilst Conqueror chased and engaged Santisma de Trinidad.
To find the link with Hong Kong, we have to fast forward through an illustrious naval career, in which Senhouse saw action in the War of 1812, commanded a number of warships, was knighted, and promoted to the rank of Captain. Mount Stenhouse (incorrectly spelt) on Lamma Island is named after him.

Senhouse was posted to the China Station in April 1839 as second in command of the Naval squadron in China reporting to Commodore Sir James Bremer. He commanded HMS Blenheim, a 74-gun ship-of-the-line, in the First Anglo-Chinese War (1839-1841), more often referred to as the First Opium War.
Senhouse was involved in the action at the Bogue Forts and the fighting around Chuenpi Island in the Pearl River, the gateway to  Canton. At the Chuenpi Convention assembled in January 1841, the Chinese Commissioner Qi Shan agreed to cede Hong Kong Island to the British Crown. However, the Qing Court was not happy with this arrangement. They thought Qi had conceded too much and he was dismissed. The treaty was repudiated and hostilities were resumed. The British were not happy either and thought that Captain Charles Elliot the Superintendent of Trade had not extracted enough. Palmerston famously derided Hong Kong as being a barren rock, with hardly a house upon it, and which would never be a mart for trade. Elliot was recalled and replaced by Sir Henry Pottinger who was appointed as Plenipotentiary and Superintendent of Trade. The war was brought to an end in 1842 with the Treaty of Nanking in which amongst other concessions, including the establishment of treaty ports and reparations, Hong Kong was granted in perpetuity to the Crown.
Senhouse may have been present with Commodore Bremer at the de facto taking of possession of Hong Kong Island in January 1841. Later that year, he succumbed to fever and died on board HMS Blenheim on 13th June 1841. In accordance with his wishes, and bearing in mind that Hong Kong still had a doubtful future as a Crown Colony,  he was interred at the Protestant Cemetery in Macau. The iron-clad paddle steamer Nemesis arrived in Macau with his body on 16th June 1841.  His memorial can still be seen today in the old cemetery. 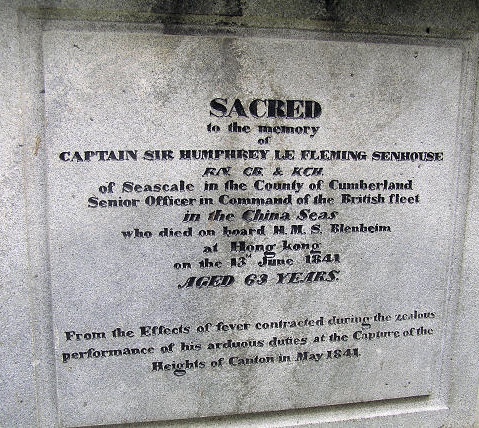 He died aged sixty and was survived by his wife Elizabeth Manley. They married in 1810 and had nine children of which five predeceased him. Elizabeth lived on until 1865 when she passed away aged eighty-one.
Posted by Philip Cracknell at 04:56