Captain Norman Henderson Cuthbertson served as Adjutant for the 2nd Battalion Royal Scots during the Battle for Hong Kong in December 1941. In this slightly out-of-focus family photograph, we see him wearing the Royal Scots headdress known as the Glengarry. The background looks like pre-war Hong Kong, but I can't identify the buildings, but I think it could be Austin Barracks on the Peak. Perhaps a reader will know. His commission was gazetted in January 1938 at which time he was twenty-years-old.


The 2nd Battalion had been in Hong Kong since 1938 having been moved there from India. I am not sure when Norman Cuthbertson arrived in Hong Kong but it was probably in 1940. Britain was at war but Kong Kong although under threat of invasion, was still at peace and Hong Kong was a good posting. Augustus Muir in The First of Foot the official history of the Royal Scots wrote than many of the officers owned yachts and that Captain Drew-Wilkinson and Lt Cuthbertson were prominent among the enthusiasts. At that time the battalion utilised Victoria Barracks, nearby Murray Barracks and Austin Barracks.

Norman Cuthbertson was born in 1918 in West Lothian, Scotland. He was the youngest of five siblings. He had two brothers and two sisters. In the photograph below we see him with his brother Andrew. Andrew tragically died at the age of ten which may not have been very long after the photograph was taken. Norman was around eight-years-old. In the photograph, he has an endearing tilt of the head, whilst his older brother has a slightly mischevious grin. They look like they were close to each other.


Lt Douglas Baird, 2/RS recalled being ordered to report to Battalion HQ at the skeet ground on Castle Peak Road to collect equipment during the early morning of Monday 8 December 1941. Whilst on his way with a corporal to Battalion HQ, they heard the sound of aircraft flying overhead. They were in fact, Japanese aircraft on their way to bomb and strafe Kai Tak Airport and Sham Shui Po Barracks. When he reached, Battalion HQ people were rushing in all directions. He ran into Captain Cuthbertson who was then serving as the battalion's Adjutant and who told them war had begun and that they were to get back to their battle positions on Pineapple Ridge. As Adjutant, Norman Cuthbertson would have been based at Battalion HQ serving as a right-hand man to the Battalion Commander, Lt -Col Simon White. The Adjutant for a battalion is normally a senior captain or major. He is in charge of administration, organisation and discipline, acting as a senior staff officer.
During the fighting on the Mainland, on Thursday 11 December, the Royal Scots war diary records that Captain Cuthbertson with personnel from the AA Platoon from Advanced Battalion HQ 'moved forward to PB 314 to thicken up defences in that area'. I was interested to find that Norman Cuthbertson had manned this PB on 11 December 1941. They had been heavily mortared but incurred no casualties. PB 314 is situated on the western side of Golden Hill Road. It's actually the one PB in that area that I have not managed to locate and explore but my friend and fellow history enthusiast, Alexander Macdonald, has been inside the remains of the PB.

During the fighting at Wong Nai Chung Gap on Hong Kong Island, Lt Stancer, commanding 'C' Coy, 2/RS was wounded in the head by shrapnel and had to be hospitalised. Captain Cuthbertson, once again only too eager to get into the front-line replaced him as Company Commander. Cuthbertson had been at Battalion HQ which at that time was located near the petrol station at the junction of Stubbs Road and Tai Hang Road. Captain Cuthbertson's company came under heavy attack. Cuthbertson organised a counterattack and prevented the Japanese from moving forward down Blue Pool Valley. Cuthbertson was also wounded during the close-quarter fighting during which the battalion held on to Tai Hang Road and Wong Nai Chung Gap Road. They were later pushed back up Stubbs Road towards Wan Chai Gap. Hong Kong capitulated on Christmas Day and the Royal Scots were ordered to break off the fighting and surrender to the nearest Japanese commander. Lt-Col Simon White, Captain Douglas Ford and Pte King proceeded under the flag of truce to the Japanese positions on Stubbs Road. They were taken to No 48 Stubbs Road which was the local Japanese HQ. Augustus Muir notes that after the surrender when a roll was taken the battalion was down to four officers and ninety-eight other ranks.
After the surrender, Cuthbertson was incarcerated in Sham Shui Po Camp and then Argyle Street. In late September 1942, 1,816 British prisoners of war including a large number of the Royal Scots were sent to Japan to work as slave labourers in factories, foundries, docks and mines. They boarded a Japanese armed freighter the Lisbon Maru. 2/Lt Baird recalled Norman, who he refers to as Ely, sleeping in the bunk above him.

Norman Cuthbertson our very tall Adjutant was nicknamed Ely, due to the similarity of his surname with that of the world-known contract bridge expert, Ely Culbertson.  His sleeping space was immediately above my head so together with Doug Fairbairn and Pip Stancer we became very friendly during the days lived on the Lisbon Maru.

On 1 October 1942, the Lisbon Maru was torpedoed by an American submarine not realising that it was carrying British prisoners of war. The freighter was armed and carried no markings. It was also carrying Japanese troops. After the torpedo hit the ship, the engines stopped and the ship developed a list. The Japanese may have tried to effect repairs, but to no avail, the ship was sinking slowly, stern first, and taking in water faster than it could be pumped out.  The Japanese troops in the stern hold were taken off the ship by another vessel which came alongside. The prisoners had expected that they too would be taken off but instead, the hatches were closed up and battened down with tarpaulin and planks. The cargo holds were in pitch darkness, and without ventilation, they soon became very hot despite the northern latitude and the cold October temperatures. There was no drinking water. There was no sanitation, and with many men suffering from dysentery and other illnesses, conditions soon became appalling. After some twenty-four hours, the list worsened. One of the prisoners had somehow secreted a knife onboard, and this was used by an officer to cut through the tarpaulin and remove the planks. They then forced their way out, some being shot by the guards as they emerged on deck. The guards were quickly overcome, and the hatches opened on the other holds. By this time the main deck was already awash. There was a panic to get out of the hold as seawater poured inside. The staircase gave way, and a number of men were injured as they fell back into the hold. Lt Douglas Baird recalled the gallantry of Captain Norman Cuthbertson.

Water was pouring in steadily now... Then we saw our Adjutant Norman Cuthbertson make for the stairway and push his way down to the bottom of the hold against the current of men climbing up. The bottom of the hold was already knee-deep in water and we expected the Lisbon Maru to sink at any moment or turn turtle as the list became more pronounced. ... Cuthbertson with the help of RSM Goodfellow  had managed to get on to the deck most of our injured Royal Scots.

2/Lt Hamilton, 2/RS recalled that Captain Cuthbertson was the last one to leave Hold No. 2, having ensured that were no more injured men remaining. The men abandoned ship, some with life-vests others holding onto floating bits of wreckage. The Japanese vessels nearby then started machine-gunning survivors in the water or trying to run them down with their propellers. Chinese fishermen from some nearby islands started picking up survivors, and perhaps it was seeing this that the Japanese started to pick up survivors. When the survivors were put ashore near Shanghai, there was only 970 out of the original total of just over 1,800 prisoners of war. Some had died on the escort vessels, and many others died (more than two hundred) over the next few weeks from diphtheria and or dysentery following the sinking. One of these was Norman Cuthbertson.

He died aged twenty-four. Although still a young man, he had set an example for all. He put others before himself. When troops were desperately trying to get out of the hold, he was going back into it, to rescue the wounded or sick men that were not able to get out unassisted.  He was remembered by his fellow officers and men as an excellent soldier, a gallant officer, a strong leader and a very fine comrade.

Addendum 1:
Alex Macdonald advised me that there is a collection of items relating to Captain Norman Cuthbertson which was donated to the Royal Scots Museum in Edinburgh in 2010 by his niece Mrs Caroline (Caro) Cuthbertson Allen. These papers make reference to Norman being a motor-cycle enthusiast and include the photo below. This was taken in Hong Kong and is blown up from a larger photo of HQ Coy and show Norman sitting beside his motor-cyle in a group photo. 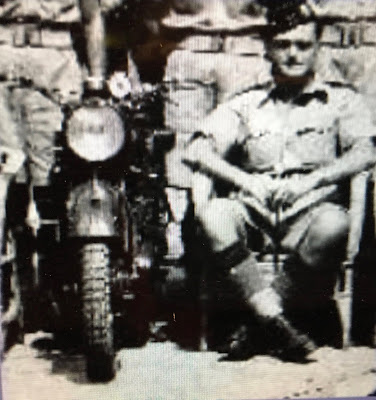 Posted by Philip Cracknell at 00:07