Christopher Michael Maltby, known as Michael, was born Friday 13 January 1891 in London. BQMS Charles Barman wrote in an appendix to his book, Resist to the End, that he was born within the sound of Bow Bells and therefore regarded himself as a true Cockney. As a child, he had lived in India, his father worked for the Indian Civil Service. He was educated at King's School Canterbury and Bedford School. At the age of nineteen, he entered the Royal Military Academy, Woolwich as an Officer Cadet. In 1910, he was posted, as a subaltern, to the 1st Battalion Royal Sussex Regiment in Rawalpindi, India. He sailed out to India on the trooper HMT Dongola. In December 1911 he joined the 95th Russell's Infantry a regiment of the British Indian Army. His first action was in 1913-1914 in the Persian Gulf. Barman wrote that he was one of the few Army officers to be entitled to wear the Naval General Service Medal. He served with the Indian Army until July 1941 when he arrived in Hong Kong to take up the unenviable (in hindsight) role of General Officer Commanding (GOC) British Troops in China. He was the military commander of an isolated outpost, which the British were willing to sacrifice, albeit not without a fight, because as Churchill famously acknowledged there was 'not the slightest chance' of being able to defend it.

If Japan goes to war there is not the slightest chance of holding Hong Kong or relieving it.  It is most unwise to increase the loss we shall suffer there.  Instead of increasing the garrison it ought to be reduced.  Japan will think twice before declaring war on the British Empire, and whether there are two or six battalions at Hong Kong will make no difference.  I wish we had fewer troops there, but to move any would be noticeable and dangerous.  (Winston Churchill in January 1941 to General Hastings Ismay).

Major-General Maltby as Military Commander and Sir Mark Young as Governor and Commander-in-Chief had the difficult task of formally surrendering the Crown Colony of Hong Kong to the Japanese on 25 December 1941. The battle had been short but brutal lasting eighteen days. The photograph below of the surrender formality at the Peninsula Hotel, conducted by candlelight, shows Major-General Maltby seated to the right. To the left is Lt-Col 'Monkey' Stewart commanding officer of 1st Bn Middlesex Regiment and seated behind him with the extravagant moustache is Wing Commander Hubert Thomas 'Alf' Bennet. Bennett was a Japanese linguist working with Major Boxer in the Intelligence unit known as Far East Combined Bureau. It was Alf Bennet and Monkey Stewart who had first walked out, with the flag of truce, to conduct the surrender, but the Japanese had insisted that Major-General Maltby and Sir Mark Young attend in person. Sir Mark is out of the photograph to the left and may have been speaking, as the others are looking in his direction. Sir Mark asked if the photographer could be removed, and the Japanese obliged, but already some photographs including this one had been taken.

After the surrender, Maltby was incarcerated as a prisoner of war in Hong Kong, Formosa, and Manchuria. He was incarcerated for three-and-a-half years until liberation in August 1945. He was firstly held in Sham Shui Po POW Camp and then in April 1942 moved to Argyle Street Officers Camp.
He called his hut, Flagstaff House, being the name of the official residence of the GOC. The house still remains today although now a tea museum.


Luba Estes sent me a photo of a sketch of Major-General Maltby that her father Lt Alec Skvorzov, HKVDC, drew whilst they were incarcerated in POW Camp in Hong Kong.


Twenty years after the war, in 1965,  Michael Maltby attended an Argyle Street Camp reunion as did Alec Skvorzov and Maltby signed the original sketch.  Many of Alec Skvorzov's sketches of Sham Shui Po Camp can be seen in a compilation of sketches published in 1948 under the title Chinese Ink and Brush Sketches of Prisoner of War Camp Life in Hong Kong.

The photographs below show Major-General Maltby looking thin and strained but happy following his release from POW Camp.


After being repatriated to the UK, Maltby retired from the British Indian Army in June 1946.  He was affirmed in the honorary rank of Major-General, which had been a temporary rank during the war. His Report on Operations in Hong Kong (which went through several drafts) was published in January 1948. He was made Deputy Lord Lieutenant of the County of Somerset and a Companion of the Order of the Bath (CB). He spent his retirement near Taunton, Somerset. He and Helene lived in a modest country cottage called Greenacre, in the village of Shoreditch on the outskirts of Taunton. A search on the internet shows the property. An old cottage with low ceilings built close to what then was a minor road, with a large garden at the side and rear.  Michael Maltby returned from a distinguished military career spent in far-off India, having fought in two world wars and numerous skirmishes. Like many British Indian Army officers, he retired to the English countryside and lived quietly. He did not write his memoirs and unlike public figures today he did not charge large sums of money to appear on the lecture circuit. Helene died in 1974 at the age of seventy-four. They had been married for forty-seven years. Mike Maltby died in September 1980 aged eighty-nine at Taunton. Michael and Helen Maltby had two daughters Ann Margaret (1928) and Barbara Helen Jessie (1931).
Michael Maltby must have sometimes wondered, did he hold out long enough in Hong Kong, should he have done things differently, did he have the right strategy, but at the end of the day, as he himself said, he and his force had been a 'hostage to fortune'.


…………………………...
Addendum dated November 2021
Major Arthur Goring, Probyn's Horse, GSO-2
I often wondered whether Major-General Maltby realised that he had been given a sort of poison chalice when he took over as GOC in July 1941. Hong Kong was short of men and equipment because it simply was not a priority. It had become an isolated outpost and a strategic liability.  Major Arthur Goring, Probyn's Horse, and GSO-2, who escaped with the MTBs got to know the General well during his time in the Battle Box. He said this (summarised) of Major-General Maltby:

He just made up his mind  to make the best of a bad job, and although he knew the place to be indefensible, I never once heard him complain. To add to difficulties, he got a very sore  throat from the dusty atmosphere in the Battle Box, and for about five days he lost his voice  completely. This must have been quite exasperating because he was unable to telephone himself .........and had to rely upon some third person to speak for him. The whole garrison loved him, and they were filled with admiration at the way in which he used to walk about by himself, visiting troops, apparently completely oblivious  of the shells which were bursting all around. He had many narrow escapes; he was standing on the lawn in front of his house [Flagstaff House] when a shell burst on the roof and demolished the end rooms; on another occasion a large bomb burst in his garden and frightened the wits out of the people who were with him, but he seemed so completely unperturbed. He did his very best, but the defence scheme had been cut and dried by the War Office for so long that there was so little  that he himself could do, and the Japanese had so many troops that the odds were hopelessly against us from the start. However, it is entirely due to his courage and determination that we lasted out for [eighteen] days. 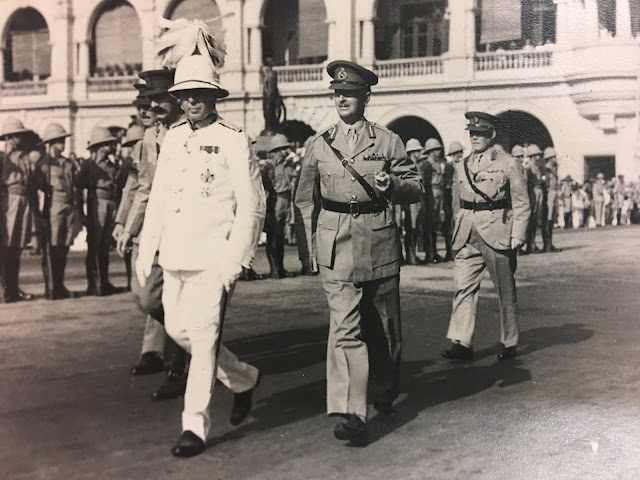 Further Reading:
Article on Major--General Maltby by Tony Banham in Dictionary of Hong Kong Biography (2012) edited by May Holdsworth and Christopher Munn.
Private Papers, consisting of a commonplace book and a scrapbook, held at the Imperial War Museum. The commonplace book is dedicated to his two daughters who he affectionately calls the rabbits.

Posted by Philip Cracknell at 20:12