This is the story of a boat.  A fine looking cabin cruiser named Vanla with three portholes on each side. She was built in Hong Kong in 1936 equipped with a small cabin forward, a saloon amidships, a small galley and a cockpit aft.  She was a typical 1930s motor cruiser with the graceful lines of that period.


The next picture shows her moored off a beach with matshed bathing huts and bathing bungalows along the beach.  We can make out people swimming.  The setting is most likely one of the bathing beaches along Castle Peak Road where the owner and his wife had a matshed.  There is an air of afternoon tranquility, but impending doom, as both photographs were taken in July 1941  just months before Hong Kong was invaded and the Pacific War began.

I discovered these photos in files relating to requisition of ships and boats by the Royal Navy. I found that the owner was Felix George Hill and he was seeking compensation from the Navy sometime after the war in 1947. On the back of one of the photos he jotted down in very neat handwriting his name and address. 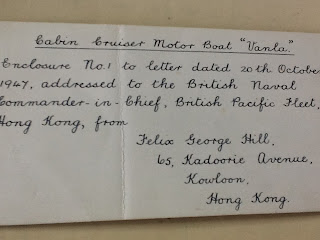 Felix George Hill was a Chief Petty Officer in the Royal Navy. I found out a bit about him from his accompanying letter and a search of ancestry.com revealed that he was born 10 January 1895 at Torpoint in Cornwall. He married Eliza Marianne Frost (1895-1977) from St Germans, Cornwall. They had a daughter Marianne Hill (1924-2006) who married Peter Scott Bentley (1924-2010).
Felix Hill joined the Royal Navy on 9 June 1913 at the age of eighteen. He joined as a Writer and served in the Royal Navy for thirty-three years until he was discharged on  7 July 1946. He first moved to Hong Kong with the Navy in January 1931 and he was in Hong Kong when the war began . He was incarcerated in the notorious Sham Shui Po POW Camp where many died from malnutrition and disease. He suffered from the lack of food and lack of medicine but he survived. He must have been in very poor physical condition on liberation in 1945 as we know he was invalided out of Hong Kong to Australia on HM Hospital Ship Oxfordshire which arrived in Sydney in September 1945.


In Sydney he was hospitalized at the RN Hospital at Herne Bay but he was soon back in Hong Kong. He returned to war torn Hong Kong in February 1946 and set about looking for his boat Vanla.
Vanla is an unusual name and I wonder why it was so called. It was built for Commander C. D. Arbuthnot, RN in 1936 when he was Commander of HMS Tamar which was the HQ ship of the Royal Navy and was scuttled early in the war. We know that Chief Petty Officer (CPO)  Felix Hill acquired the boat in March 1938 when Commander Arbuthnot returned to England.
Ever since I first arrived in Hong Kong, junking has always been a very popular weekend activity. Felix and his wife Eliza entertained friends on fishing trips and picnics parties to bathing beaches. I believe that Eliza and her daughter Marianne Hill would have been evacuated with most other women and children (except those in essential services like nursing) in June 1940 and mostly they went to Australia. When war broke out on 8 December 1941, Felix had stored the Vanla with supplies.

I stored and provisioned Vanla to capacity, with sufficient necessities to last four men for at least two months. I intended Vanla to be my means of escape from the Japanese when Hong Kong surrendered.

On Tuesday 9 December Vanla was moved (with appropriate permissions) from Victoria Harbour to Aberdeen Harbour together with a tug and two naval lighters. A short while later on Friday 12 December Vanla was requisitioned by the Royal Navy.  Many merchant ships, launches and private motor boats had been requisitioned and put to use by the military. A naval crew took over Vanla replacing the Chinese coxswain and 'boy' on board who had been employed by Felix Hill.
Felix writes Vanla was used extensively between Aberdeen Naval Base and Repulse Bay during the Battle for Hong Kong, and I last saw her on 20 December 1941 in a badly battered condition, tied up to a pier in Aberdeen, with about two feet of water in her,  and her engine flooded. During my three years and eight months as a prisoner of war,  I heard that Vanla had been put out of action by a bomb blast and enemy gunfire. On my return to Hong Kong in February 1946, I made enquiries as to Vanla's fate, but could obtain no definite information.
One letter on the file is addressed to Felix Hill as Manager of the China Fleet Club. I don't know if this role was something he did whilst in the Royal Navy or whether this was after he retired in 1946. Nor do I know when he left Hong Kong assuming that he eventually left for his native Cornwall. I was able to contact Felix Hill's grandson who had childhood memories of his grandfather who he referred to as Felix Geo Hill. He recalls that Felix worked for some period at San Miguel Brewery as well as being an official at the China Fleet Club and the Happy Valley Race Course. He also recalls being told that his grandfather had been a POW in both WW1 and WW2.
As for Vanla  I suspect to this day she may be lying in the murky depths under Aberdeen Harbour. I can see how Felix loved that boat - I suspect he loved Hong Kong as well and the Royal Navy with whom he served for so many years, and since this started as the story of a boat I will end this story with that evocative photograph of Vanla in days gone by.

Posted by Philip Cracknell at 02:29