The photograph taken today, and depicted below, shows the grave of Police Sgt Herbert Jackson in Stanley Military Cemetery. The tragedy is that having survived the war and the period of internment - he died in a savage shark attack whilst swimming at Tweed Bay beach adjacent to the civilian internment camp where he had been confined since January 1942. 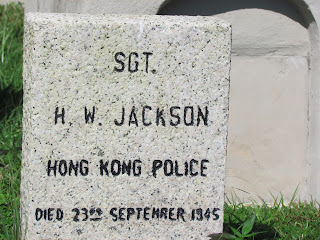 He was, by all accounts, a popular police officer aged 32 at time of his death. Before the war he had worked in the Fingerprint Dept. He was originally scheduled to have been repatriated on 22 September on the British Aircraft Carrier HMS Smiter.  His passage was delayed, and although free he was still resident at Stanley Internment Camp which was increasingly deserted as internees left to man essential services in town or were repatriated on troop ships, hospital ships and fighting ships of the Royal Navy.
On Sunday afternoon, 23 Serptember 1945, he decided to go swimming at Tweed Bay Beach this popular pre-war swimming beach had been opened by the Japanese for internees to use during the summer months. A few others were on the beach enjoying the afternoon sunshine. Herbert Jackson was swimming near the rocks close to the beach.
The China Mail for Monday 24 September, describes how the peaceful afternoon was shattered by a cry of terror, as a huge shark savaged him, the sea all around him turning red as his life blood drained away. He was dragged ashore where he died from shock and loss of blood.
Amongst those on the beach that day were Captain Arthur Braude of the Hong Kong Volunteers. He had been recently released from Military POW Camp. His wife Irene had been an internee at Stanley. She was a trained nurse and had commanded the Nursing Detachment of the  Hong Kong Volunteer Defence Corp. Captain Braude rushed into the water, and with others that were on the beach,  helped pull Herbert to the shore.
John Karsten Stanton, a fifteen-year-old boy,  who with his family had been interned for three-and-a-half years at Stanley, happened to be on the beach that afternoon with friends. In his memories he writes:

We heard a cry for help. We all jumped in and swam to the rock and splashed to frighten the shark off. We brought him back to the beach covered in blood, his left buttock missing.

He was carried up to the nearby Tweed Bay Hospital but he was already dead by the time they arrived. Geoff Emerson, historian and author of Hong Kong  Internment, 1942-1945 writes on Stanley Email   Group  that 'some forty years ago when I was interviewing former Stanley internees, Mrs Irene Braude told me she was on the beach the day Sgt Jackson  was attacked by the shark and helped to pull him out of the water.'  Mrs Braude immediately provided first aid but there was little that could be done and the China Mail reports (see below)  that Herbert died within minutes of being dragged ashore. The shark had virtually severed his left leg and ripped his upper leg and buttock off causing huge loss of blood. 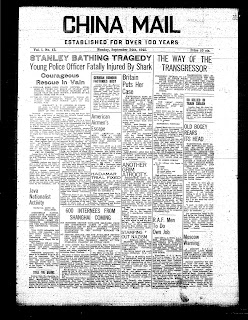 So tragic to have survived the privations of Stanley internment camp only to be killed so violently and unexpectedly.

Posted by Philip Cracknell at 03:36