In the summer of 2012 my son and I went over to France to visit the landing beaches and battlefields of Normandy.  It was an incredible experience to see the invasion beaches and the ruins of war scattered over that historic countryside. One of my friends in Hong Kong, Martin Dewick, had come across a book about a tank commander in Normandy by the name of Lt Stuart Hills which had a surprising Hong Kong connection. Stuart Hills had been born in Hong Kong in 1924 and likewise his elder sister Helen in 1922, and his younger brother Peter in 1926. His parents Herbert Stuart Hills and Edith Attwater Hills were in Hong Kong when the war began in December 1941. Their home was destroyed by shelling and they were incarcerated in Stanley Internment Camp until liberation in August/September 1945.
The book is titled By Tank into Normandy and is the gripping account of Lt Hills experiences landing on the invasion beaches on D-Day and the chase across France to Germany. 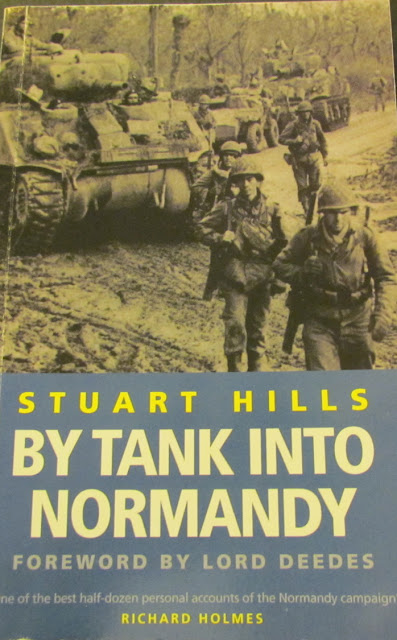 Lt Hills served with the Nottinghamshire Sherwood Rangers Yeomanry. He was an officer in charge of a troop of three Sherman Mark IV DD (Duplex Drive) or swimming tanks. His unit was assigned to Gold Beach on the western end of the British sector.  As the Landing Craft approached the beach whilst under both shell and machine-gun fire,  he recalls.

I gave the order, 'Go, Go,  Go'  and we lumbered slowly down the ramp and flopped into the sea.

He was standing on the back of the tank, in order to be able to see over the flotation screen. After fifty to seventy-five metres the tank started taking in water and finally sank no doubt due to shrapnel damage to the soft underside of the tank.
The crew abandoned the tank some five-hundred metres offshore and got into their small rubber dinghy without a paddle or any means of propulsion other than their bare hands. For much of the day they drifted offshore, with shells and gunfire all around them, and they were lucky not to be mown down by approaching landing craft and other vessels heading for the invasion beach.

Lt Hills and his crew were eventually picked up by an LCG (Landing Craft fitted with Guns) whose job was patrolling up and down the beach pounding German shore defences from different positions off Gold Beach.  When the LCG had to return to England they deposited Lt Hills and his crew back in a dinghy but this time with a paddle and they landed by dinghy, somewhat ignominiously, no doubt looking wet and wretched on Gold Beach on D+1. They rejoined their regiment and were allocated another Sherman tank and Lt Hills went on to win the Military Cross.
But now let's go back to that Hong Kong connection. Lt Stuart Hills' father Herbert had come to Hong Kong in 1910 and was employed by Jardine Matheson. When World War 1 erupted in 1914 he joined the Hong Kong Volunteer Defence Corp (HKVDC) and later transferred to the imperial cavalry where he saw service at Salonika and elsewhere in the Middle East. Stuart Hills takes up the story:

My father had met my mother Edith in the Middle East, where she had served as a nurse at Gallipoli and in Egypt. They duly married in Hong Kong in 1919, after my father had returned to the colony to rejoin Jardine Matheson. Their house was 29 The Peak, where I was born in 1924.

In 1941 when the war began Herbert Stuart Hills was a fifty-six-year-old Exchange Broker. His house on Lugard Road was heavily shelled during the eighteen days of fighting following the Japanese invasion of the Crown Colony on 8th December 1941. Stuart writes that his father 'as an old soldier, served as a Private in the HKVDC with special responsibility for radio communications. My mother nursed in Rosary Hill (also known as St Albert's Hospital) and later was moved to St Theresa's Hospital.'

After the surrender of the colony on Christmas Day 1941 Herbert and Edith were incarcerated at Stanley Civilian Internment Camp. Hebert was billeted in Block 13 Room 19  whilst Edith was in Block 13 Room 53. Edith was moved from Rosary Hill to St Teresa's Hospital in Kowloon and came into camp some six months later than Hebert, which explains why they had different billets.  Stuart recalls that "when they were finally released (in 1945), my mother resembled a skeleton and my father was in an even more terrible condition, suffering from tuberculosis and beriberi among other things.  My father was put on a hospital ship to New Zealand and then in 1946 invalided back to Britain, where he died in 1947" aged sixty-two, no doubt as a result of the privations experienced in Stanley Camp.

My sister Helen and my mother had gone by ship to Australia in October 1941 to stay with an Aunt When my mother returned to Hong Kong in late November 1941 (weeks before war broke out), my sister stayed on in Sydney. She decided to risk returning to England and departed on the Blue Funnel line vessel SS Ulysses in 1942, but the ship was torpedoed off the coast of South Carolina. Helen and other survivors were picked up by a US destroyer.

Edith was awarded the MiD (Mention in Dispatches) for her conduct and bravery as a wartime nursing sister who served in both world wars. Edith died in 1974 aged ninety-one.

Home on the Peak
The photographs below show the Hills family home at 29, The Peak in pre-war days. One notices the well-kept lawn, the stunning views across the harbour and the many windows.

The photograph below was taken in 1954 and shows the house (on the left of the photo) still in war-time ruin. The house was demolished in 1955 and rebuilt.

The following photographs from Mandy Parkes (neé Hills) give us a fascinating glimpse of the inside of the house, a chance to see what a family home looked like in pre-war Hong Kong.

One's attention is drawn to the old-fashioned radio set. In those pre-television days, the radio was a popular form of entertainment in the privacy of one's own home, although there was only one radio channel (ZBX) in Hong Kong. The radio programmes for the day were included in the daily newspapers.  The comfortable armchairs arranged around the hearth and the books on the coffee table all tell of a comfortable family home. Hong Kong winters could get quite cold especially on the Peak and the fireplace would have been well used.
A cosy dining room one's attention is drawn to the fireplace and the mantlepiece with the mantle clock which had to be wound up by hand and the hydrangeas.
A cosy alcove fitted with a couch and a desk for writing letters in the pre-digital world where the word email did not exist. Photographs of family on the desk and the painting of a boy in the alcove is Stuart .
Sunlight shining through the windows, this was a bright and happy home with a spectacular view across the harbour. It was a house of many windows. When the war started the house built in 1922 with its memories of happier days was badly damaged by shelling from across the harbour and aerial bombing. It was left in ruins. The family sold it after the war and it was demolished in 1955 and a new house built on the plot.
The letter below was written to the owner of 29, The Peak by Stuart Hills in 1984 hoping to see the house on a trip he was planning on making to Hong Kong in 1985 by then he was aged sixty and living in Tonbridge, Kent. Of course, at that time the original house had been demolished and rebuilt. 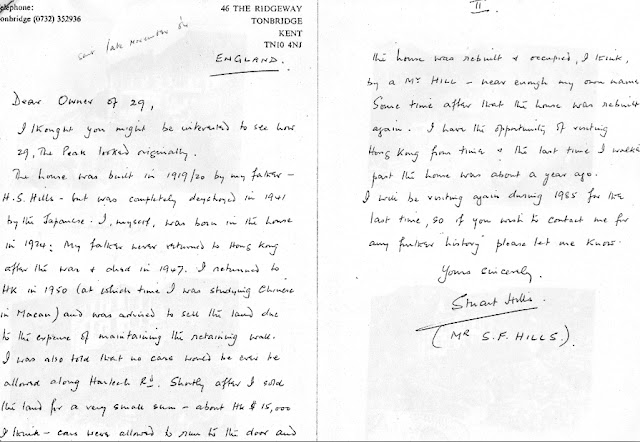 A glimpse of  pre-war Hong Kong from family albums

These following photographs are taken from the family album and show Hong Kong scenes before the war.

My thanks to Stuart Hills' daughter Mandy Parkes (neé Hills) for permission to use the family photographs and for providing me with other information relating to her family's history in Hong Kong.

My thanks to Peter Gesner Van der Voort for allowing me to re-produce the 1954 photo from his family collection which shows No. 29 The Peak still in ruins from its wartime damage.

My thanks to David Bellis, local historian in Hong Kong, who established the Hong Kong history web site Gwulo.com for allowing me access to photographs published on www.gwulo.com and other assistance so helpfully given.

Posted by Philip Cracknell at 05:19