Pillbox No. 9 was a Beach Defence Unit (BDU) consisting of a pillbox (PB) and a separate Lyon Light structure. The Lyon Light (searchlight) was housed in a concrete structure with steel shutters.  It had a crew of two men. A small generator powered the searchlight. Communication between the PB and the Lyon Light (LL) structure was effected by voice pipe. The LL structure was normally 10 to 50 metres away from the PB and usually situated above the PB. The PB had telephone connection with Company (Coy) HQ and the other pillboxes in their platoon/group. PB 9 was situated on Aberdeen Praya Road looking southwards towards Ap Lei Chau (aka Aberdeen Island). It was located to the west of the Aberdeen naval base and dockyard. The PB and LL has long been demolished, but I found there is a photo (see below) showing the LL structure on local history web site 'Gwulo.com'.  Click the link. https://gwulo.com/atom/22417 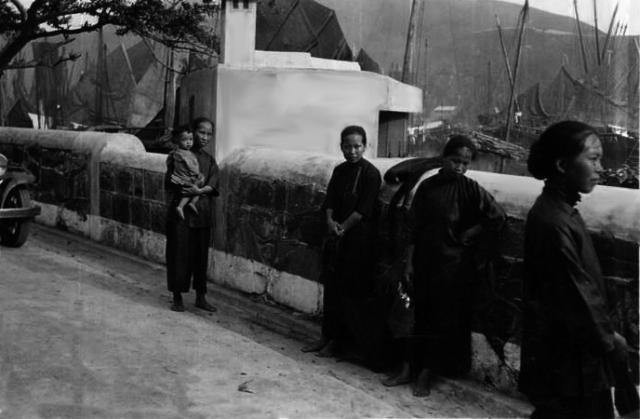 In the photo, which I believe is dated 1940, you can see the closed steel shutters in the searchlight aperture and the ventilation shaft with its spoked ducts. The PB was probably located at the waterline and close to the LL. The Beach Defence Unit (BDU) was manned by soldiers from 'A' Coy 1/Mx. The company was commanded by Captain Hudson who was responsible for the PBs from No 1 at Sandy Bay to No. 11 on Ap Lei Chau (Aberdeen Island). These 'A' Coy pillboxes are illustrated in the extract from the wartime map shown below. It will be seen that PBs 10 and 11 were located on Aberdeen Island. 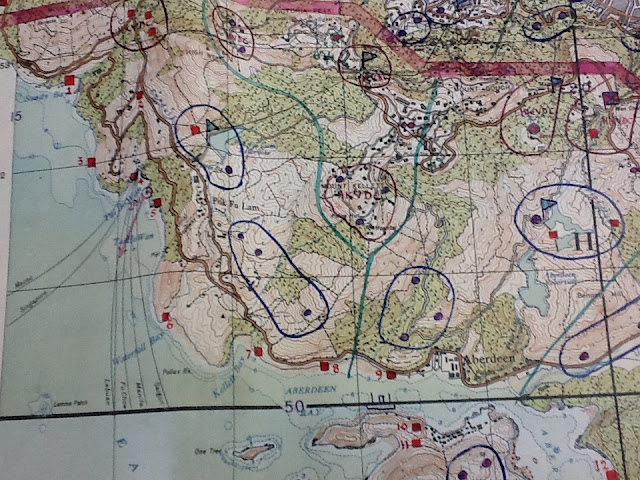 PB 9 was commanded by Sgt Thomas Richard Montague Castle. He was born February 1908 in Middlesbrough, North Yorkshire. He joined the army, aged eighteen in 1926. He was promoted to full sergeant in 1937. He was a regular soldier with fifteen year's experience by the time war started in Hong Kong.  Road blocks were established near PB 8 (Cpl Kendall) and at PB 9 (Cpl Reeves).

During the first week there was a lot of bombing and shelling in the Aberdeen area. Following the Japanese landings on the Island  - Sgt Castle (and possibly his ten-man crew) was dispatched to fight in an infantry role.

Tuesday 16 December: Heavy air raids on Aberdeen. PB9 had a severe time but no casualties.

Wednesday 17 December:  A stick of bombs was dropped in Kellett Bay which narrowly missed PB 7.

Friday 19 December: One section under Sgt Castle under the command of 2/Lt Newton sent to support Winnipeg Grenadiers (WG) at Shelter E1-1.

Sunday 21 December: Orders received from GSO-1 [senior staff officer] that all PB crews were to be held in readiness to move to any part of the Island. ... Two sections under 2/Lt Newton  sent for defence of Aberdeen Industrial School [naval base] of which one section under Sgt Castle sent to position south of Bennet's Hill.

Monday 22 December: Half of 'A' Coy were deployed around Bennet's Hill defending the approaches to the naval base at Aberdeen Industrial School. The other half were deployed on the north shore (Wan Chai area).

Thursday 25 December: Sgt Castle's section south of Bennet's Hill was shelled and L/Cpl George Barkway was killed and one Vickers MG was hit and destroyed.  At 1600 hours the order was received  to cease fire, cease hostilities.

Sgt Castle was interned at Sham Shui Po POW Camp. In September 1942, he was drafted with other members of 1/Mx to work as slave labourers in Japan. He boarded the ill-fated armed Japanese freighter, the Lisbon Maru. The freighter was sunk by an American submarine not realising that the vessel was carrying some 1,800 British POWs. Sgt Castle survived the sinking, but not long after arriving in Japan, in a weakened state, he died of dysentery at Hiroshima Military Hospital.

Posted by Philip Cracknell at 04:14